They’re at the heart of our communities, but some suburban and country football teams are reeling from growing injury lists that in some cases are threatening their ability to field a team.

Community sport is set to return across Melbourne this weekend as COVID-19 restrictions lift, but one official said his football club had such bad luck with injuries he thought perhaps “someone’s ridden over a black cat”.

Another said juniors were not in the best condition after having last year off “playing their Xbox” due to pandemic restrictions, followed by pauses this year to both pre-season training and three rounds of games in the two recent lockdowns. 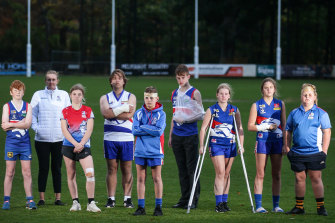 Injured Gisborne Rookies players pictured in late May. The club’s president is worried the bad run of injuries will continue.Credit:Paul Rovere

Jodie Bannan, president of the Gisborne Rookies junior club north-west of Melbourne, which has 17 teams, said 14 of the club’s 25 under-17s players were listed as injured in late May.

She said this week that only two of those 14 were now ready to resume playing when Riddell District Football League games restart on Sunday.

She fears that with no games played for the past three weeks due to Melbourne’s lockdown, the injury woes will continue. “It might mean we’ll regress,” she said.

It had been a “stop-start” season and “they’re jumping back a step”, Ms Bannan said.

Gisborne Rookies teams had been due to resume training on Wednesday, Thursday and Friday last week, but the sessions were cancelled due to floods.

The Rookies’ under-17s team almost forfeited a May 23 game against Melton Centrals due to its injury list, but Melton forfeited first – because 12 of its players were injured.

The wider Gisborne Rookies’ injury list, which in late May numbered 34, included one under-15s boy who had four broken ribs and an under-17s boy with a torn Achilles tendon who was off for 10 weeks, plus knee injuries, broken collar bones and at least six broken arms.

There have been 13 cases of concussion, but Ms Bannan said she approved of new rules banning each sufferer from training or games for 12 days.

She said the rise in injuries might be due to hard turf that wasn’t played on for 12 months, or “kids maybe sitting inside, playing their Xbox and not doing a lot of exercise over that period”.

Melton Centrals president Rob Auber said his club had some “nasty injuries” this season, including an under-15s player who broke his tibia in two places and an under-13 with a snapped collar bone.

He said players had missed games last year, followed by restrictions on 2021 pre-season training due to the February lockdown, and now three weeks off with the latest lockdown.

He said it raised the risks because players were out of practice and unaccustomed to the high impacts of competition. “A lot of kids are unfit compared to where they normally are.” 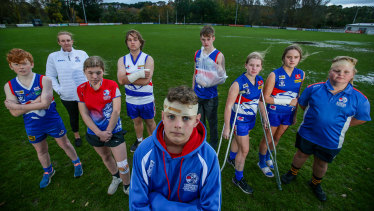 Sports physician Peter Larkins said staff at practices he is involved in are seeing sports injuries in “peak numbers that we haven’t seen in five or six years”.

He said colleagues and their competitors “are all saying we’ve never been this busy”.

He said community players’ year off in 2020 – due to coronavirus lockdowns and restrictions – had led to “deconditioning”.

“There has been a drop-off in training, the pre-seasons haven’t been as much there. Injuries occur when people aren’t as prepared.”

He said the cancellation of matches and training due to the lockdown in recent weeks may have exacerbated the deconditioning problem. “Lack of consistency has been an issue in 2021.”

Adult players in particular had not gone into the season as fit or conditioned as they should be.

Allan Chandler, president of Coburg Districts Football Club, said his seniors had 10 to 12 players out injured each week over the first half of this season, which was abnormal.

“We put it down to, we had that year off and a lot of it is soft-tissue injuries. Generally, I think it’s everywhere.”

Maryborough, in western Victoria, has been hit with “lots of injuries in the seniors”, according to president Brendan Roughead.

“I think it’s unusually high,” he said. “We’ve got three players with knee [injuries]. If you got one a year you’d be unlucky, so I think it is high. I don’t think it’s players coming back not as fit — our players are pretty fit, I think. I certainly think a year off has affected it, but I don’t think it’s fitness.”

East Sunbury football club had 14 senior players sidelined in late May – most with soft tissue injuries. Football president Glenn Smerdon said the uncertainty around community sport starting in 2021 meant pre-season training was not as thorough as it should have been.

“Every club’s going through it at the moment, but I just think someone’s ridden over a black cat at our club, to be brutally honest. We haven’t had any luck,” Mr Smerdon said.

”Last year could have been good for the older guys to rest up and get their injuries right, but possibly not a lot of the hard work has been put in during pre-season because of the uncertainty of the year ahead.

“We had a little bit lower numbers than normal during pre-season and we actually put that down to the uncertainty of whether the season was going to go ahead, so the mindset of the player may not have been to work as hard as what he normally would have.”