The entertainment auction house Julien’s Auctions once described Colin Cantwell as the “missing link” of “Star Wars” history. Even the longtime partner of the concept artist, who died Saturday at age 90, didn’t know of his attachment to the design of “Stars Wars,” as well as of other classic films like “2001: A Space Odyssey,” “Close Encounters of the Third Kind” and “WarGames,” until the landlord of their Boulder, Colorado, apartment forced them to empty out the basement, which had been packed with drawings, slides, models and scripts — a treasure trove of sci-fi movie lore.

In 1974 George Lucas asked Cantwell — a UCLA film school graduate who had created animated graphics for “2001” — to sketch designs based on his draft screenplay of a war in a galaxy far, far away. Cantwell produced drawings for spacecraft and vehicles, including X-Wing and Y-Wing fighters, TIE fighters, the Imperial Star Destroyer, the Death Star, Luke Skywalker’s landspeeder, the T-16 Skyhopper, the Jawas’ sandcrawler, and the original Millennium Falcon (which would eventually become the rebels’ blockade runner).

Artist Ralph McQuarrie would riff off of these designs when he created lush paintings that convinced 20th Century Fox to pony up funding for Lucas’ space epic. 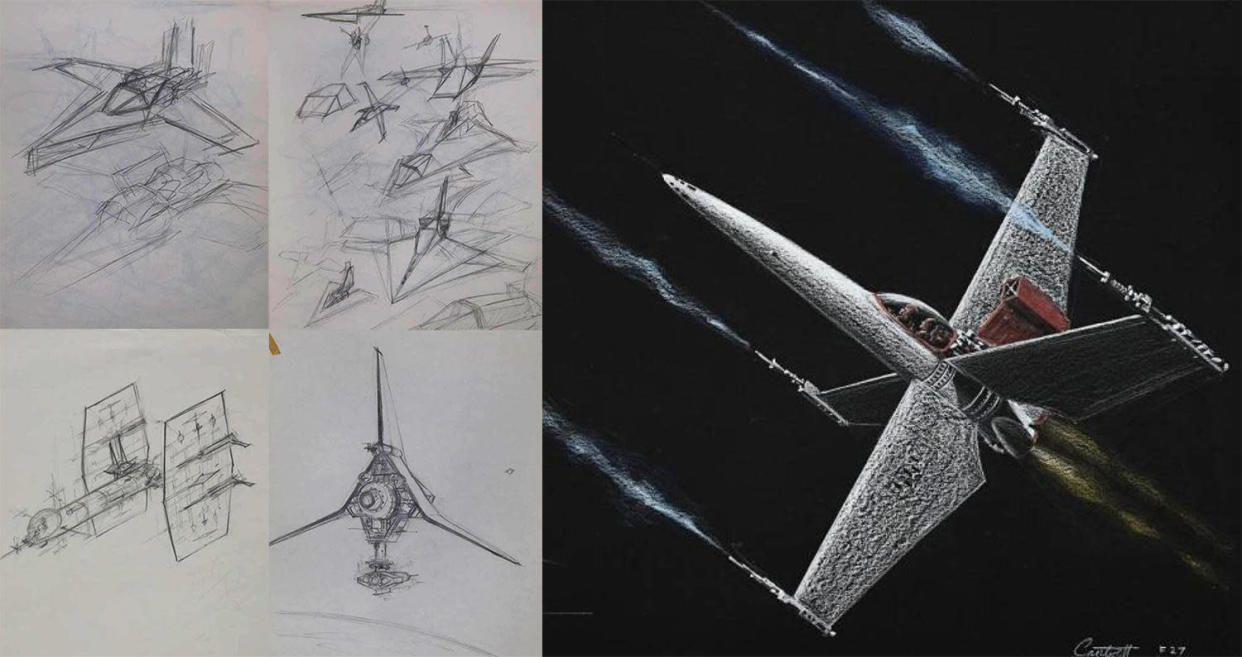 Cantwell also constructed prototypes of the spacecraft by kit bashing plastic models, including parts of drag racing cars. (Luke Skywalker can be seen playing with one of Cantwell’s models at his Tattooine homestead.)

In fact, a problem arising while working on the mold of his Death Star prototype gave Cantwell the idea that led to the film’s dramatic climax, as he explained in a 2016 Reddit posting: “I noticed the two halves had shrunk at the point where they met across the middle. It would have taken a week of work just to fill and sand and re-fill this depression. So, to save me the labor, I went to George and suggested a trench. He liked the idea so much that it became one of the most iconic moments in the film.” 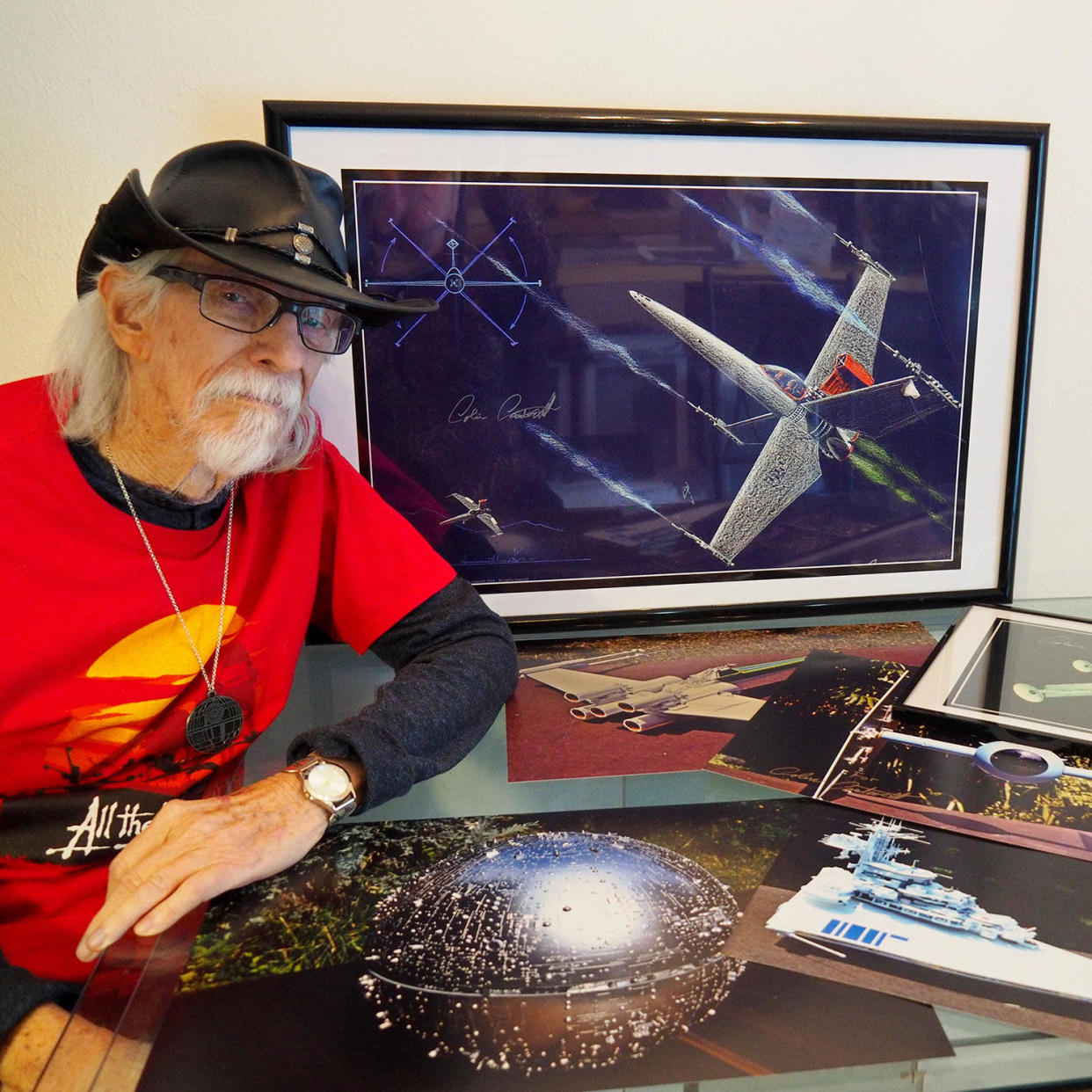 But Cantwell turned down Lucas’ offer to run Industrial Light & Magic after the release of the first “Star Wars.” Instead, the animator who’d worked on imaging and communications for NASA’s lunar and Mars missions, and served as a lead analyst for CBS News’ coverage of the Apollo 11 moon landing, pursued varied interests, from computer engineering to writing fiction.

Born in San Francisco on April 3, 1932, Colin James Cantwell was the son of a graphic artist who worked for CBS. As a child Colin was diagnosed with both tuberculosis and a partial retinal detachment. As a result, he explained on Reddit, he was confined to a darkened room, outfitted with a heavy vest to prevent coughing fits. “I spent nearly TWO YEARS of my childhood immobilized in this dark room. Suffice to say, nothing else could slow me down after that!”

Though he originally intended to study architecture under Frank Lloyd Wright, upon Wright’s death Cantwell changed his direction. At UCLA’s film school he became their first animation graduate, and worked with the Jet Propulsion Laboratory and NASA on communications materials for the early space program.

As an animator brought late onto Stanley Kubrick’s “2001” production, Cantwell created computer graphics, as well as shots produced on an animation stand of the sun aligning with the monolith.

When Walter Cronkite broadcast live coverage of the first manned moon landing, Cantwell — who was in direct communication with Mission Control — fed detailed information to the CBS News anchor, including the exact moment the Eagle landed on the Sea of Tranquility.

Mutual friends introduced Cantwell to Lucas, and the “American Graffiti” director hired him to come up with spaceship designs. It presaged other film work, including concept art of aliens descending upon Devil’s Tower for Steven Spielberg’s “Close Encounters of the Third Kind”; fighter craft for the TV series “Buck Rogers in the 25th Century”; and graphic displays for the NORAD computer complex in “WarGames.” He also wrote and directed the first Omnimax film, “Voyage to the Outer Planets,” depicting a manned mission to the outer planets in the 24th century.

In 2014, memorabilia from his basement cleanout took in more than $118,00 at auction. Late recognition for his prototype “Star Wars” designs — some of which were revived for use in later sequels — led to his attending comic book conventions, where he was welcomed by “Star Wars” fans. He also sold prints of his work.

His partner, Sierra Dall, said that in recent years Cantwell developed dementia, which led to his death on Saturday.