Hardy partygoers were pictured across Britain’s high streets last night braving the bitter cold in order to enjoy a Christmas night out.

Temperatures may have been below freezing, but that didn’t stop festive revellers propping up bars and clubs.

Can-can dancing in the street and friends hitching a ride on one another’s back were just some of the antics young people got up to. 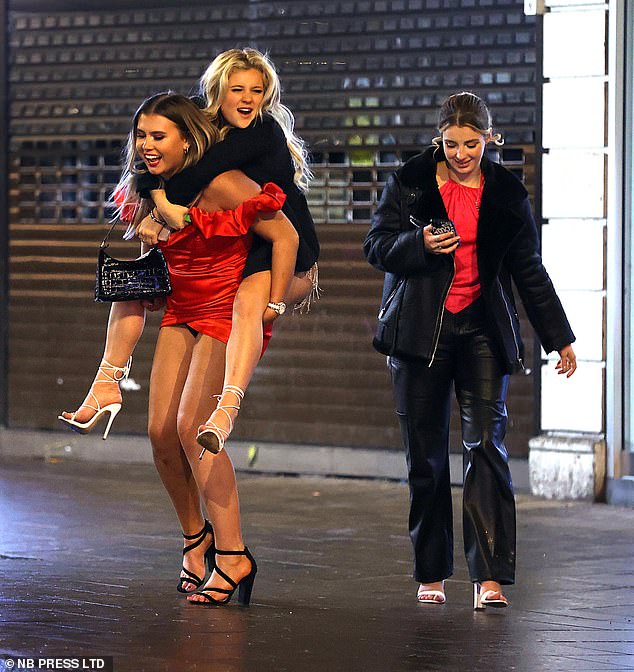 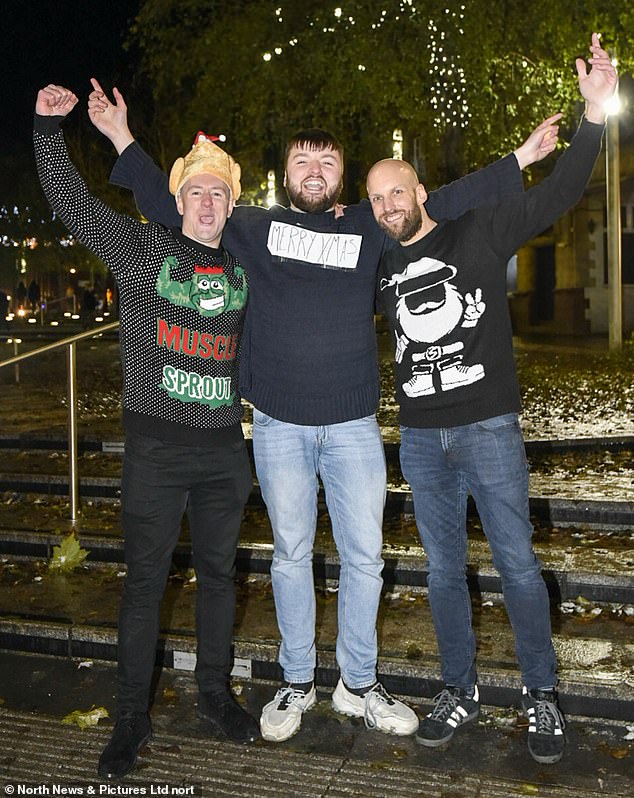 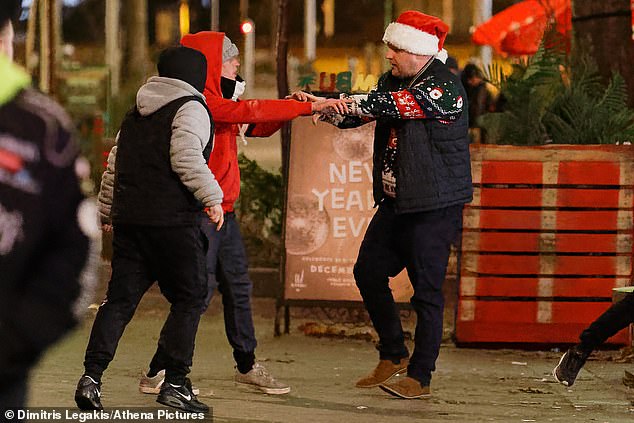 Two partygoers wearing Satan hats lock hands in the street in Swansea, Wales , as their friend looks on 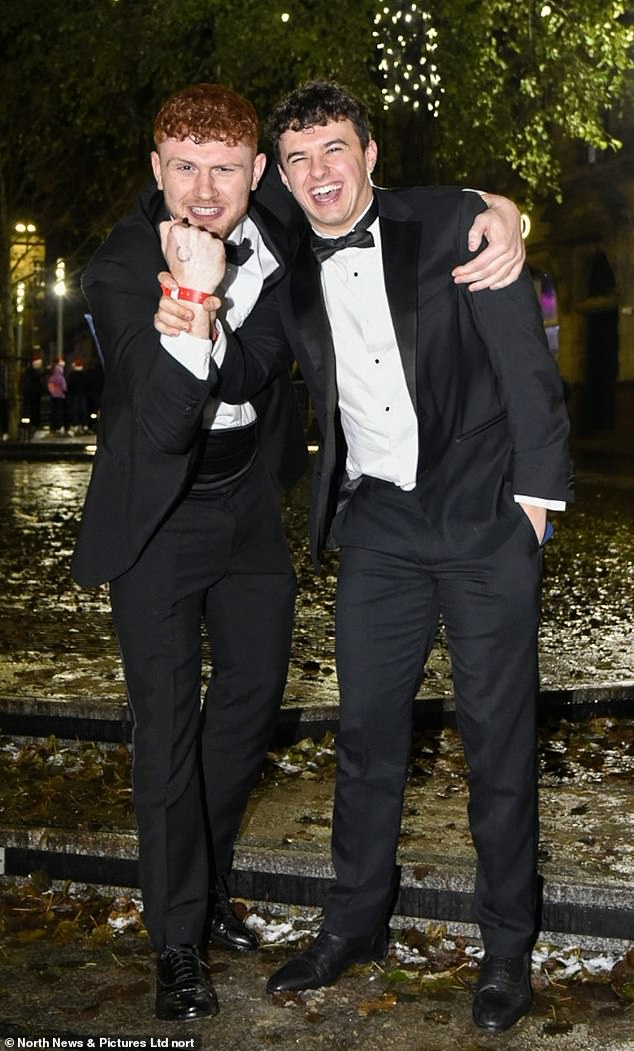 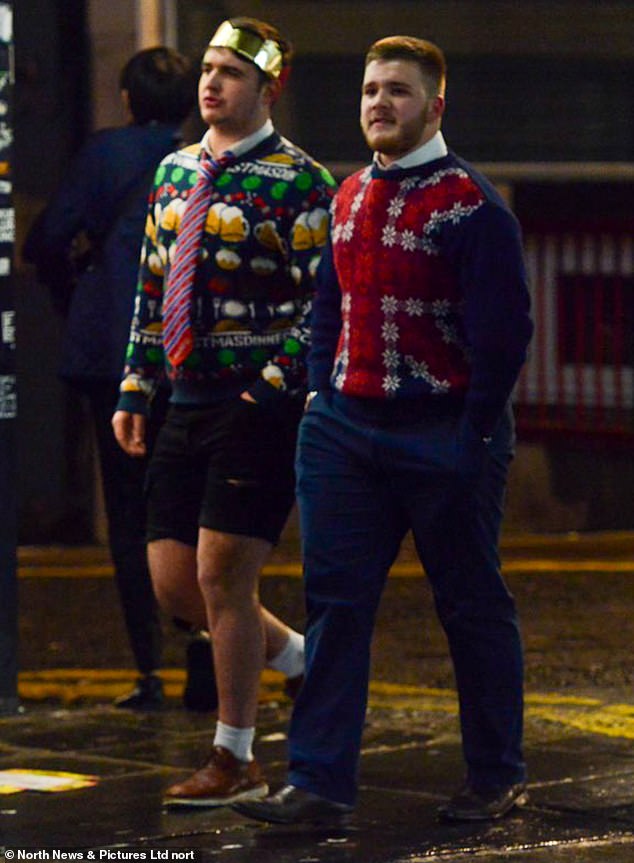 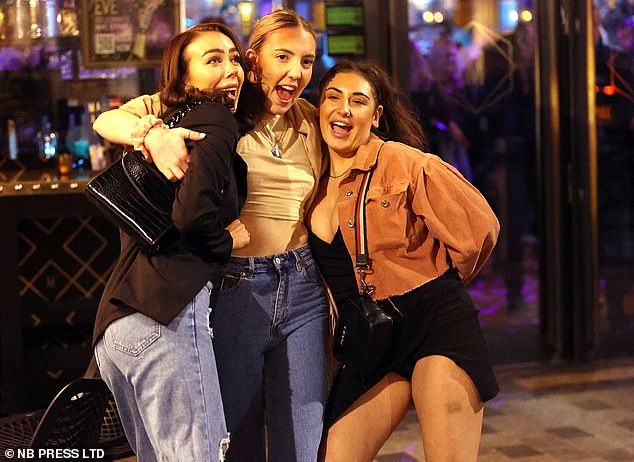 Three girls posed proudly outside a club as the festive season gets into full swing, despite the chilly weather

Most of the UK will see another blanket of snow over the weekend followed by a band of rain and milder air, bringing an end to the cold snap, forecasters have said.

The Met Office has issued a yellow weather warning for snow and ice covering the majority of Scotland, Wales, the north of England and the Midlands from 3am to 9pm on Sunday.

Another warning for snow and ice will also cover most of the south of England from 3am until 11am on Sunday.

Forecasters say the UK will be swept by snow on Saturday night with the potential for up to 15cm in the north of Scotland. 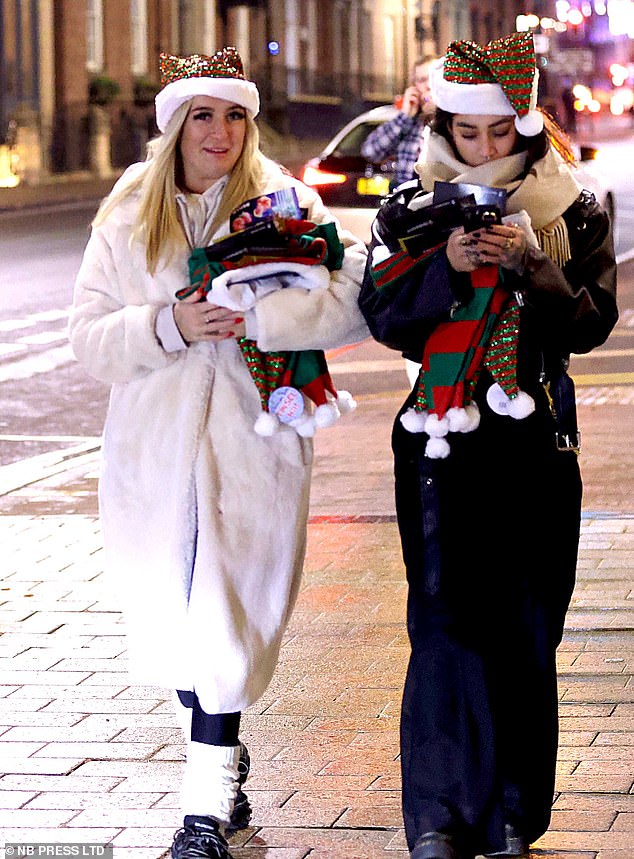 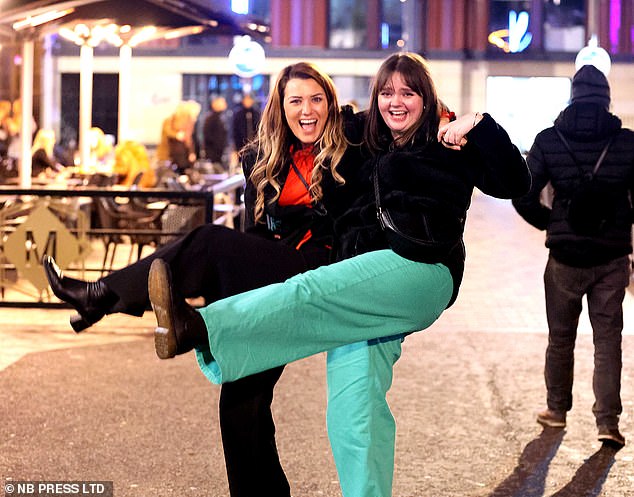 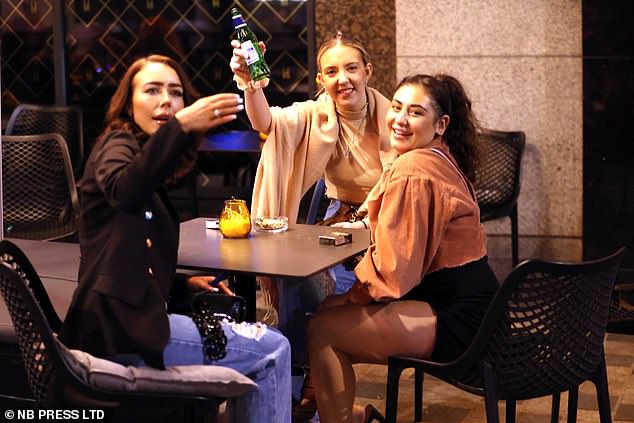 Only the brave! A trio of determined party gals drink outside while toasting the festivities 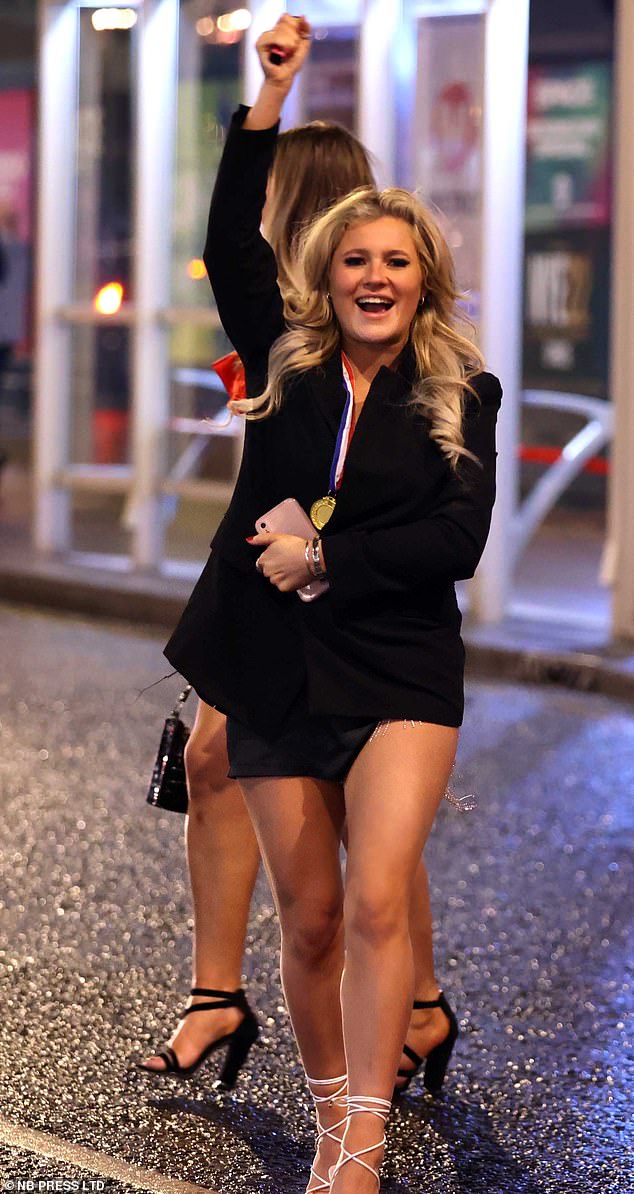 But a band of rain followed by milder air will move in on Sunday, bringing an end to the current cold snap.

It comes as the current severe weather conditions have caused major disruption across the UK in the last few days.

Meanwhile, engineers have warned that some people on Shetland could be without power until the weekend as they work to reconnect thousands entering their fourth day without power after significant snowfall.

Met Office meteorologist Ellie Wilson said: ‘A band of rain and snow is going to be moving north-eastwards across the country through Sunday.

‘It’s bringing milder air behind it, but that milder air bumps into the cold air that’s where we’re seeing where the snow is likely to fall.’ 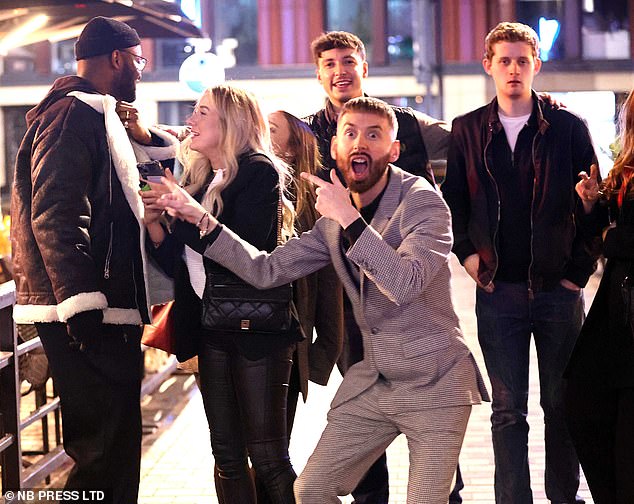 This way! A group of youngsters gather outside a club yesterday evening 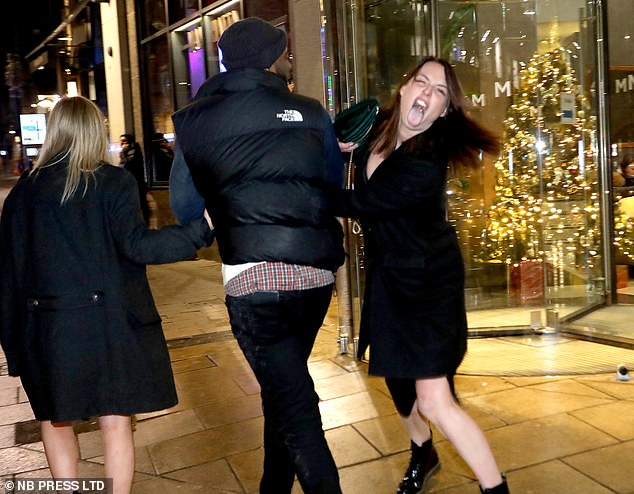 Tongue out! At least one partygoer was having fun while pulling a face to the camera 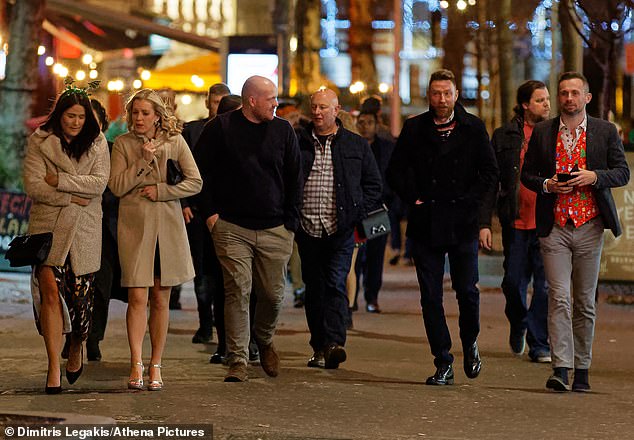 Ms Wilson said the snow could fall up to 8cm over Wales and 15cm in the north of Scotland.

But she added: ‘That snow will quickly be followed by rain so any of those accumulations shouldn’t last too long.

‘Because of the current cold conditions that we’ve seen, any of that snowfall will be falling onto cold frozen surfaces so there is a risk of ice here through the morning.

‘That rain will quickly be following closely behind later on Sunday,’ she added.

Ms Wilson said temperatures on Sunday afternoon onwards will be ‘on the rise’ and will likely hit 9-10C in the west.

While it will still feel cold in the morning in Scotland and the north of England, she said: ‘Once that rain band arrives, it will be getting warmer.’

The meteorologist said that temperatures will likely have risen to 11-13C across the UK on Monday.