Christchurch: The New Zealand producer of a film about the aftermath of the Christchurch mosque attacks has defended it against accusations of “white saviourism”, saying it will instead acknowledge a host of heroes.

The film, They Are Us, is tipped to star Australian actress Rose Byrne as New Zealand Prime Minister Jacinda Ardern and has been billed as an “inspirational story about the young leader’s response to the tragic events”. It will follow Ardern in the week after the attacks, as she helps rally the country behind her message of compassion and unity. 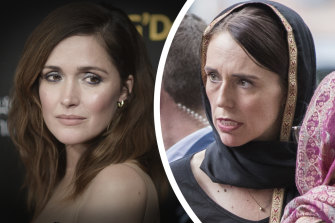 It will be produced by FilmNation and written by New Zealander Andrew Niccol who has won a BAFTA award and been nominated for an Oscar for his film The Truman Show.

“They Are Us is not so much about the attack but the response to the attack […] how an unprecedented act of hate was overcome by an outpouring of love and support,” New Zealand producer Philippa Niccol told The Hollywood Reporter.

Several members of New Zealand’s Muslim community criticised the film, with advocate Guled Mire​ fearing it would feed “this problematic white saviour mentality” by focussing on the Prime Minister rather than the victims. He called for it to be shut down.

Some Muslims in Christchurch, including the sister of one of the 51 people killed on March 15, 2019, and the community’s former media spokesperson, said they were unaware of any consultation about the film, despite international press reporting the script had been developed in consultation with several members of the mosques affected by the tragedy. 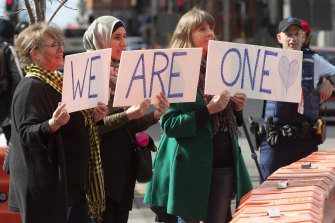 Supporters of the mosque shooting survivors hold signs of support outside the Christchurch High Court after the sentencing of Australian Brenton Harrison Tarrant in Christchurch last year.Credit:AP

Campbell acknowledged the subject was a sensitive one. The idea for the film came from producer Ayman Jamal​, who had spent time working in New Zealand before the attacks and was inspired by Ardern’s call for unity, which included the title line.

Other New Zealand Muslims have called for the film’s profits to go towards survivors and the counter-terrorism effort, which Campbell said was “something to consider when the project is further advanced”.

The Hollywood Reporter said the script was developed in consultation with several members of the mosques affected by the tragedy.

“We are thrilled to bring to market this inspiring true story about the positive impact, even in the darkest of moments, a strong leader can have on their constituents’ lives when they work from a place of compassion, love and an unwavering conviction to do what is right,” FilmNation CEO Glen Basner told the publication.