An out-of-control bushfire is burning through the Little Desert national park and high winds are expected again.

The 1400 hectare blaze is burning towards the north through the 130,000 hectare Little Desert national park, about 375 kilometres west of Melbourne.

More than 27,000 properties were left without power, after an unusually windy and hot night across the state.

The State Control centre warned a wind change was expected around midnight Sunday which pushed the fire direction from south-easterly to northerly. By 2.20am seven firefighting vehicles were at the scene.

In a warning issued at 11pm Sunday night, people in the area of Duchembegarra and Little Desert were told that leaving the area was the safest option and conditions could deteriorate very quickly.

Residents of Dimboola, Pimpinio, Vectis, and Wail to the fire's east, and Gerang Gerung to the north are still under an advice level warning to monitor conditions.

The fire broke out as the state sweltered through a hot night – Melbourne's overnight temperature hovered around 30 degrees until a cool change about 4.30am dropped the temperature to 25 degrees.

More than 27,000 properties were left without power.

Michael Laczko, meteorologist at the Bureau of Meteorology, said Sunday night and Monday morning were "well above" the Melbourne November average overnight minimum of 11.2 degrees.

"It would have been quite similar across the state," he said.

The State Emergency Service received 659 calls for help over the 24 hours to 6am Monday, with 517 alone for fallen trees and 74 calls relating to building damage.

An SES spokeswoman said the busiest units around Melbourne were Nillumbuk, Lilydale and Whitehorse, while Tralagon, Diamond Creek and Mildura also saw a high number of call outs.

Ausnet, which supplies power to the state's east had 27,192 customers unexpectantly offline by 7.20am Monday morning.

Warrnambool, Geelong, Morwell, Traralgon, Sale and Bairnsdale are expected to be buffeted by high winds of up to 100km per hour on Monday. A severe weather warning has been issued for West and South Gippsland and parts of the central, East Gippsland, south west, north central and north east forecast districts. 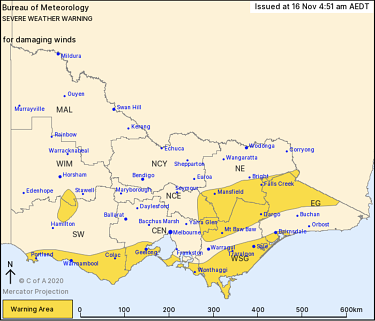 Areas impacted by a severe weather warning for damaging winds on Monday.Credit:Bureau of Meteorology

After this morning's cool change, Melbourne is headed for a top of 23 degrees – relative relief after the mercury hit 32 at 5pm on Sunday afternoon.

The bureau is forecasting a top of 20 in Melbourne on Tuesday before temperatures climb back up to the high 20s and low 30s on Wednesday and Thursday.

To stay up to date with bushfire information:

At the end of each day, we’ll send you the most important breaking news headlines, evening entertainment ideas and a long read to enjoy.  Sign up here.