Silhouetted against a wall of flame, firemen battle to control an oil depot inferno after a devastating Russian cruise missile attack on Lviv.

‘The boys have been through hell,’ said Miss Avdyeyeva. ‘This fire was started by non-humans. Let them burn in the same hell.’

Three missiles rocked the western Ukrainian city on Saturday afternoon, sparking fires that blazed all through the night.

Black smoke drifted from the depot to the historic centre of Lviv, stopping weekend shoppers in their tracks.

Five people were injured in the attack but no one was killed.

‘The third strike threw me to the ground, which was moving as if an earthquake was in progress,’ said security guard Yaroslav Prokopiv.

The Ukrainian interior ministry said the attack was part of a campaign to destroy fuel and storage depots and it would now disperse supplies of both. 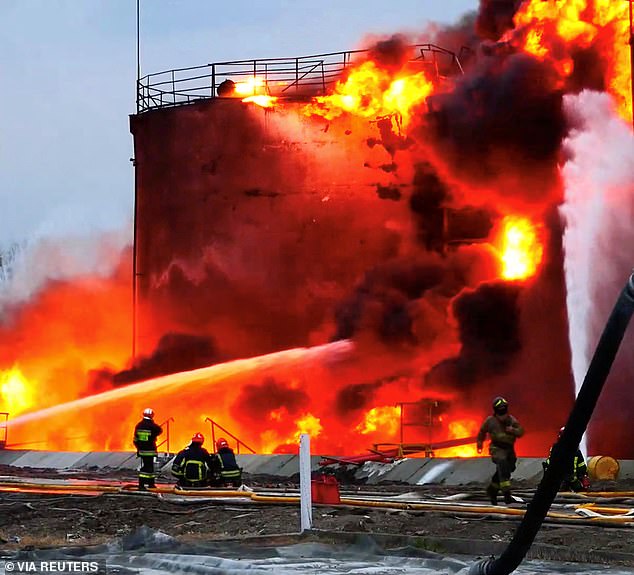 Silhouted against a wall of flame, firemen, pictured, battle to control an oil depot inferno after a devastating Russian cruise missile attack on Lviv

Lviv, a Unesco world heritage city whose churches, coffee houses and trams recall Vienna, has been a safe haven for tens of thousands of refugees fleeing fighting in the east of the country.

It had been untouched by the war but the 720,000 residents were urged to stay indoors or seek shelter after the depot attack.

Two hours after the warning was issued, three more missiles rained down on a factory used for repairing tanks, anti-aircraft systems and radar stations.

The plant stands behind a high-security roadblock in a densely populated district in the south-east of the city.

There were no reports of casualties.

Dmitry Leonov, a 36-year-old IT worker who lives in the neighbourhood, said his windows rattled after the first explosion: ‘I took refuge in a shelter but my friend, who was walking  his dog, was sent flying backwards by the force of the blast.’

In footage from an apartment block three blasts were heard, seconds apart, and a ball of fire went skyward.

Plumes of smoke then rose high above surrounding blocks of flats.

Russia’s defence ministry said yesterday that it had struck military targets in Lviv. 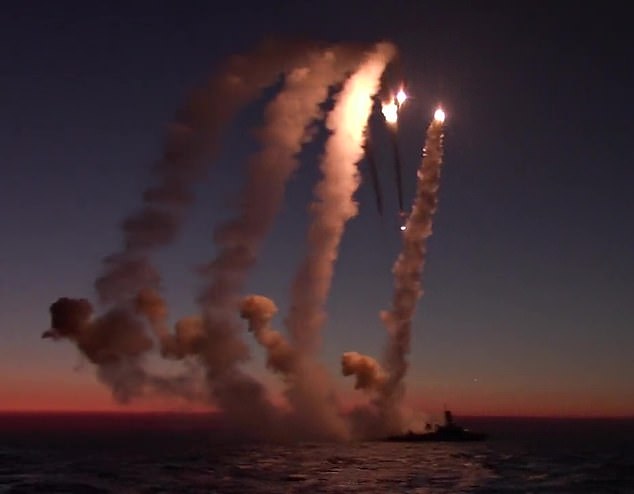 The Russian Armed Forces launched a missile strike, pictured, with high-precision weapons on the objects of military infrastructure of Ukraine on Saturday, March 26

Spokesman Igor Konashenkov said the attack destroyed a large depot that he claimed was providing fuel to Ukrainian troops in combat zones.

The facility was hit with long-range, sea-launched weapons, he added.

The strikes came hours before Joe Biden delivered a forceful condemnation of Russian counterpart Vladimir Putin in an address in Warsaw.

The strikes were Putin trying ‘to say hello’ to the US President, according to Lviv’s mayor, Andriy Sadovyi.

In a crowded bomb shelter under an apartment block a short way from the first blast site, Olana Ukrainets said she could not believe she had had to hide again after fleeing from Kharkiv, one of the most bombarded cities of the war.

‘We were on one side of the street and saw it on the other side,’ said the 34-year-old IT worker.

‘We saw fire. I said to my friend, “What’s this?” Then we heard the sound of an explosion and glass breaking.’

Lviv is hosting an estimated 200,000 people who have fled other bombarded towns and cities and has been a way-station for most of the 3.8million refugees who have left Ukraine since Russia invaded on February 24. 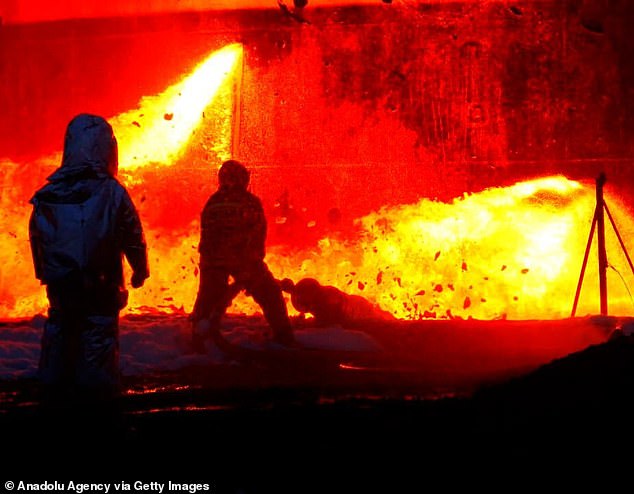 Firefighters, pictured, try to extinguish the fire as the flames and smoke rise after Russian guided missiles hit fuel tanks attacks as Russian attacks continue on Ukraine, in the western Ukrainian city of Lviv

The city is around 45 miles from the Polish border.

Russia insists that it has ended its first phase of the conflict and claims it is shifting its attention to eastern Ukraine’s disputed territories.

Elsewhere in Ukraine over the weekend, residents, including the elderly, the infirm and the injured, continued fleeing Irpin, the under-fire Kyiv suburb.

Most were driven to a road block in private cars, ambulances and Red Cross vehicles and on to central Kyiv before escaping to safety in the west.

Authorities in the capital warned that Russians were increasingly disguising themselves as civilians to engage in sabotage.

In the second city of Kharkiv, the target of intense bombardment for weeks, the authorities reported 44 artillery strikes and 140 rocket assaults in a single day, including a strike on a hospital and humanitarian aid centre that authorities said left four dead. 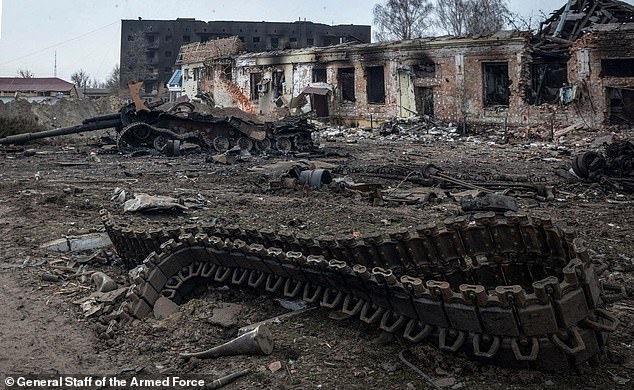 This shows a Russian tank destroyed following a battle in the town of Trostyanets, Sumy region

But musicians there yesterday performed an emotional concert in a metro station that was being used as a makeshift shelter.

It was the opening day of the Kharkiv Music Festival which performers were determined to mark, whatever the circumstances.

By the end of the day, they had something to celebrate as Ukrainian forces launched counterattacks to successfully retake a number of villages around the city.

That success was replicated elsewhere in several strategic towns, including Trostianets, near the Russian border in the Sumy region.

It was one of the first places to fall under Moscow’s control.

Pictures showed Ukrainian soldiers and civilians among heavily damaged buildings and what appeared to be abandoned or smouldering Russian tanks and other military equipment.

The town was captured by Putin’s forces on March 1.

Poltavka and Malynivka, towns in the south-eastern region of Zaporizhzhia, were also liberated by Ukrainian forces following heavy fighting.