Brussels last night warned Boris Johnson that he will have to revert to a softer post-Brexit relationship to get the trade deal he wants by the end of next year.

EU leaders said the price of the tariff and quota-free agreement Mr Johnson aims to secure by the end of 2020 would be remaining tied to vast swathes of the bloc’s single market rules.

At the end of a two-day summit in Brussels, European leaders welcomed Mr Johnson’s decisive election victory, which provides certainty that the withdrawal deal he agreed with the EU can finally be delivered. 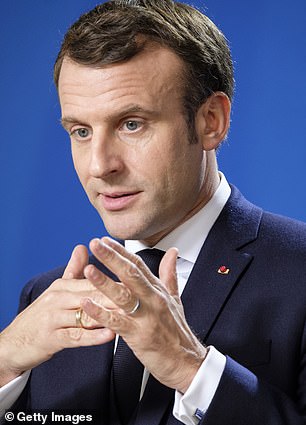 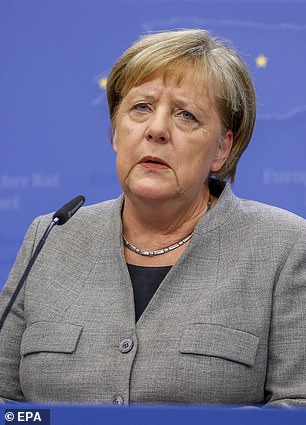 Left: French President Emmanuel Macron said tariffs would have to be introduced on UK goods if Britain tried to diverge too far from EU standards. Right: German chancellor Angela Merkel said the bloc would do everything in its power to stop Britain becoming ‘a competitor on our doorstep’

But with negotiations over the future relationship set to begin, they said Britain would be granted a swift trade deal only if the Prime Minister agreed to a ‘level playing field’ with the EU.

French President Emmanuel Macron said tariffs would have to be introduced on UK goods if Britain tried to diverge too far from EU standards.

German chancellor Angela Merkel said the bloc would do everything in its power to stop Britain becoming ‘a competitor on our doorstep’.

Mr Macron said: ‘Let me be clear, in the absence of regulatory convergence we will not be able to conclude an ambitious trade deal.

‘The [German] Chancellor rightly said the UK is turning into a competitor and we don’t want them to turn into an unfair competitor.

The US President urged voters to celebrate Mr Johnson’s crushing defeat of Labour leader Jeremy Corbyn. As the final results trickled in, he tweeted: ‘Congratulations to Boris Johnson on his great WIN!

‘Britain and the United States will now be free to strike a massive new Trade Deal after BREXIT.’

He added: ‘This deal has the potential to be far bigger and more lucrative than any deal that could be made with the EU. Celebrate, Boris!’

Woody Johnson, America’s ambassador to the UK and a close ally of Mr Trump, told the BBC Britain ‘has never been anything but at the front of the queue’ for a trade deal.

‘My message to the UK is the more loyal we are, vis-a-vis to one another, the closer relationship we have.

‘But do not believe you can have a strong trading relationship and maximum access to the single market with different regulations.’

Brexiteer MPs say staying aligned to Brussels rules – referred to as a ‘level playing field’ – could prevent Britain from striking trade deals around the world. It would mean staying aligned in areas such as workers’ rights, taxation, state aid and environmental standards.

Irish premier Leo Varadkar appeared to hint that EU leaders expect Mr Johnson to make concessions due to the size of his majority, which means he could easily stave off any rebellion.

He said: ‘I’d like to ensure we still have tariff-free and quota-free trade between Britain and the EU and to have a set of minimum standards so that nobody feels that there’s unfair competition or anyone’s trying to undercut them.

‘And [from] my conversations with Mr Johnson, I think he’s probably in a similar space. I think the fact Mr Johnson has a clear majority makes a big difference. I think the Prime Minister’s hand is strengthened.’

It came as EU leaders formally fired the starting gun on the second phase of Brexit talks.

It took them just 30 minutes to sign off new legal text saying trade talks should begin ‘immediately’ after Britain leaves on January 31 and after the withdrawal agreement is passed in the Commons.