BRUMMIES are the biggest love cheats in Britain as one-in-six men have admitted bedding another woman at their stag do.

Men across the country have confessed to romping with someone else ahead of saying their wedding vows – but how does your city compare? 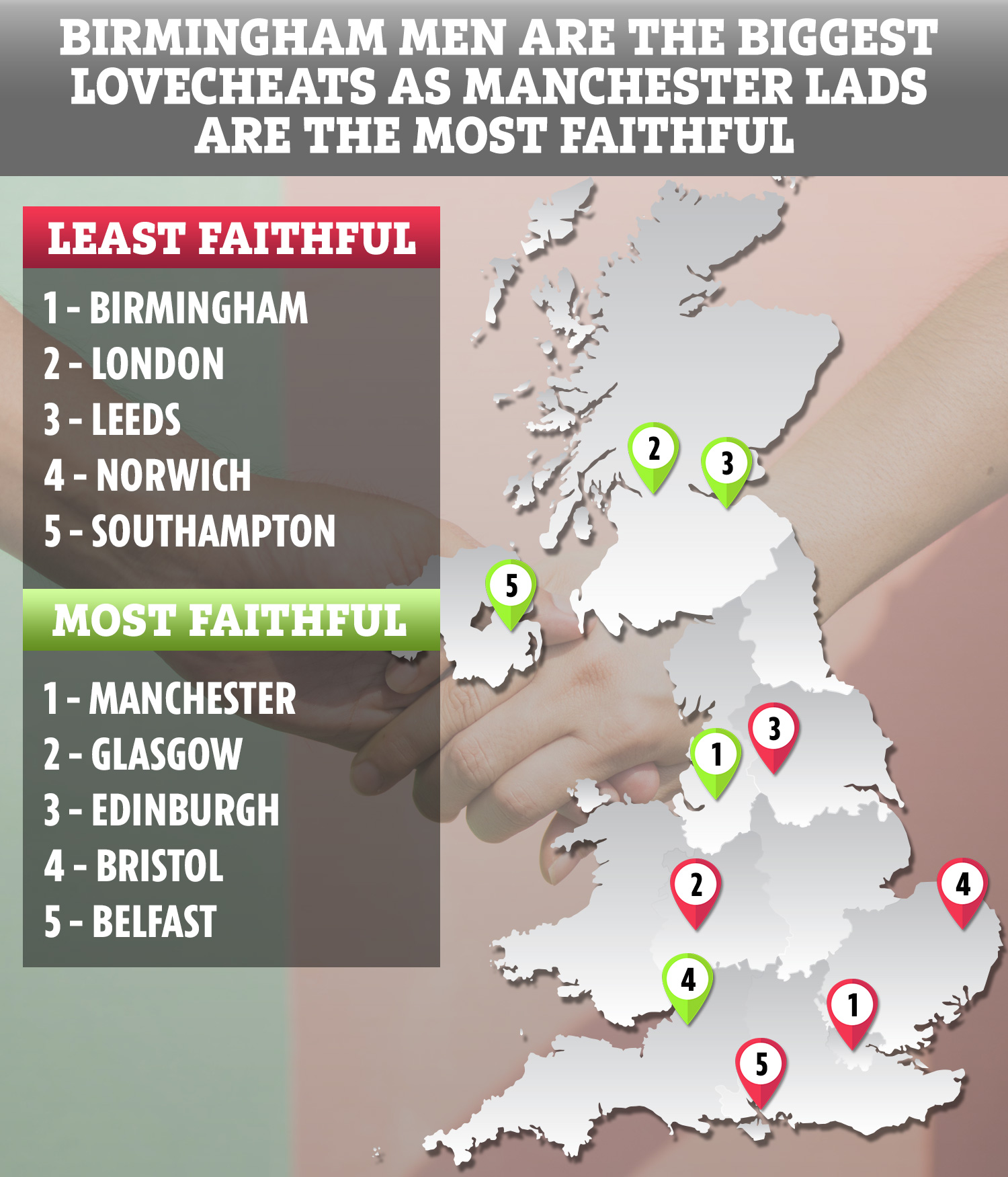 A poll of 2,000 Brits found 16 per cent of men from Birmingham admitted to doing the dirty deed.

London lads weren't too far behind as 14 per cent of men confessed to cheating on their fiancé on their own stag do, with Leeds men also at 14 per cent.

The most faithful blokes in the UK are from Manchester, where only four per cent of men said they had cheated on their soon-to-be wife at their bachelor party.

The study by horse racing experts myracing.com found that one-in-10 men in the UK confessed to being unfaithful on the big night out.

On the other hand, five per cent of women in the UK have admitted to cheating on their groom at their own hen do.

The worst offenders are from Sheffield with 13 per cent confessing to romping with another man at their party.

TIL DEATH DO US PART

Women from Norwich came in at second as nine per cent said they cheated and then ladies from Newcastle followed with four per cent.

In London, women were the most faithful – with only one per cent saying they were unfaithful during their hen do.

The study also found that 20 per cent of men said it was 'more acceptable' to cheat while on a stag do, because it was the 'done thing' – compared to just nine per cent of the women who were asked.

Furthermore, nine per cent of those polled said the wedding was called off after a cheating partner was found out.

Bosses at horse racing experts myracing.com, which conducted the study, found that 23 per cent of those polled admitted to being kicked out of a nightclub on a stag or hen do.

The most faithful cities

A total of 19 per cent confessed to taking class A drugs at a bash.

And 17 per cent said they got so drunk they lost their phone, wallet or purse after their hen or stag do.

Of the Brits polled, 12 per cent said they woke up 'in another town' after their big night out

A spokesman for myracing.com said this week: "The UK’s wedding plans are being ripped up as nine per cent of weddings are being cancelled because of extreme behaviour on stag and hen dos.

"One in 10 blokes admit to cheating at their own bachelor party and one-in-five women admit the same."

James Prosser, of myracing.com, said: “Stag and hen dos are huge events for those involved and it looks like there are plenty of similarities between those taking part in stag and hen dos.

“What people get up to has always been stuff of legend when people talk about stag and hens, and this looks to be the case with Brits getting into all sorts of situations in the UK and abroad with sometimes unfortunate consequences when people return home.”