Brits stuck abroad as travel bans come into force: All flights from Portugal and South America are cancelled after travellers race to beat 4am deadline – as fears grow over mutant Covid strain

Britons were stuck in Portugal today after all flights were cancelled amid growing concerns about a mutant coronavirus strain which has emerged in Brazil.

Travellers from the country were banned from entering the UK along with all those from South America, with Portugal included due to its strong travel links with Brazil.

The ban, which also covers the Central American state of Panama and the former Portuguese colony of Cape Verde, came into force at 4am this morning.

All flights to and from the countries on the banned list have now been cancelled, including routes to London Heathrow from Lisbon,Rio de Janeiro and Buenos Aires.

One Twitter user from Manchester posted: ‘So I’m stuck in Portugal, how nice. I moved to a whole different country so I wasn’t stuck here – f*** you, corona.’ 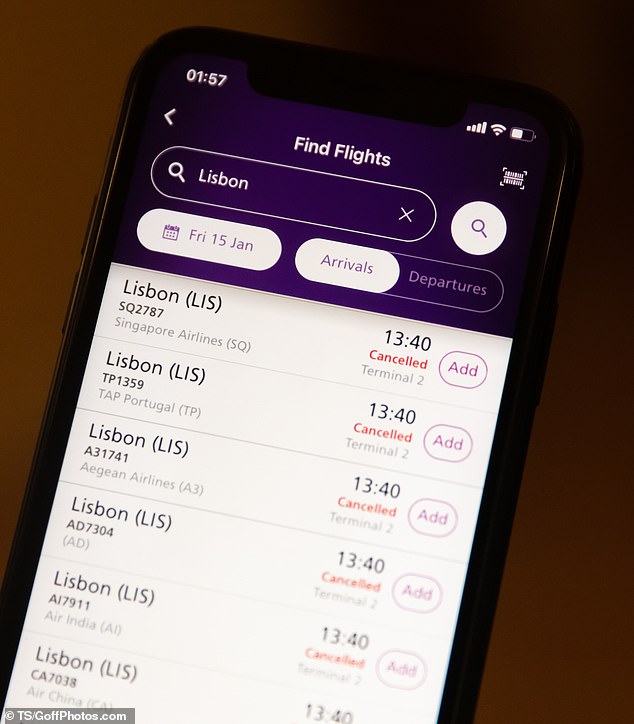 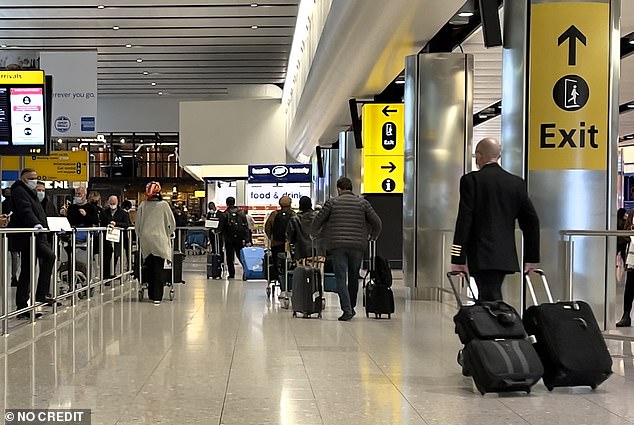 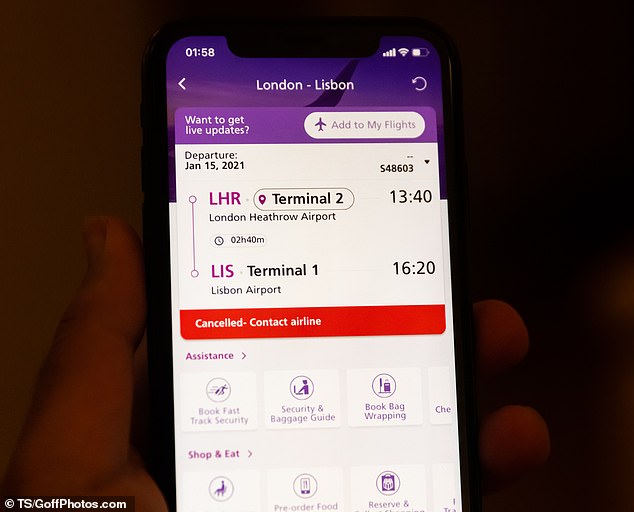 A second, David Curle, of Lighthorne, Warwickshire, added: ‘My flight home from Portugal on February 1 with BA has been cancelled for the fourth time.

Which countries does the travel ban apply to?

The new travel ban applies to anyone who has travelled from, or through, the following countries to Britain:

And a third, Charlotte, wrote: ‘I’m so jealous, my grandparents are stuck in Portugal.’

Jonny Wilso, from London, added last night: ‘On the last flight back to UK, all flights cancelled from Portugal because of ‘Brazilian variant’. F***, I’m in a movie still, when does it stop?’

Scientists analysing the Brazilian variant believe the mutations it shares with the new South African strain seem to be associated with a rapid increase in cases in locations where there have already been large outbreaks of the disease.

British and Irish nationals and others with residence rights are exempted from the ban, which was backed by the Scottish Government, though they must self-isolate for 10 days along with their households on their return.

There is an exemption also for hauliers travelling from Portugal to allow the transport of essential goods.

Today, Transport Secretary Grant Shapps insisted the ban on travellers from Portugal and South America is needed to help with Covid vaccine measures in the UK.

He said the move was to combat a new strain of coronavirus found in Brazil, telling Sky News: ‘Scientists aren’t saying that the vaccine won’t work against it.

‘But we are at this late stage now, we have got so far – we have got jabs into the arms of three million Brits now – that’s more than France, Spain, Germany, Italy put together, and we do not want to be tripping up at this last moment.

‘Which is why I took the decision, as an extra precaution, to ban those flights entirely.’ 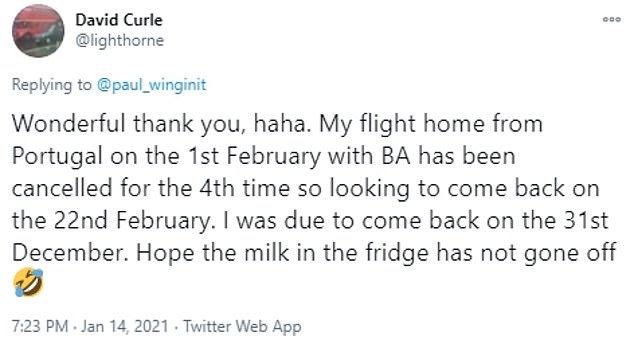 Mr Shapps added: ‘Everybody coming from anywhere not on a travel corridor must, by law, quarantine. And there are not exceptions to that and you can end up with a criminal record if you don’t.’

** Are you a Brit stuck abroad? Please email MailOnline at: [email protected] **

Shadow home secretary Nick Thomas-Symonds said the ban was a ‘necessary step’ but accused ministers of incompetence and ‘lurching from one crisis and rushed announcement to another’.

Epidemiologist Dr Mike Tildesley suggested the South America travel ban is slightly late but will still ‘minimise the risk’ of the new coronavirus variant found in Brazil from entering the UK.

Speaking on BBC Breakfast, Dr Tildesley said: ‘We always have this issue with travel bans of course, that we’re always a little bit behind the curve. With Covid we need to remember that when you develop symptoms you could have been infected up to a couple of weeks ago.

‘So it’s really important that these travel bans come in quickly so that we can prevent any risk. My understanding is that there haven’t really been any flights coming from Brazil for about the past week, so hopefully the immediate travel ban should really minimise the risk.’ 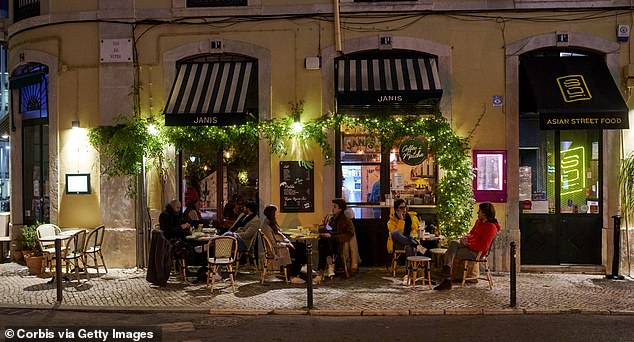 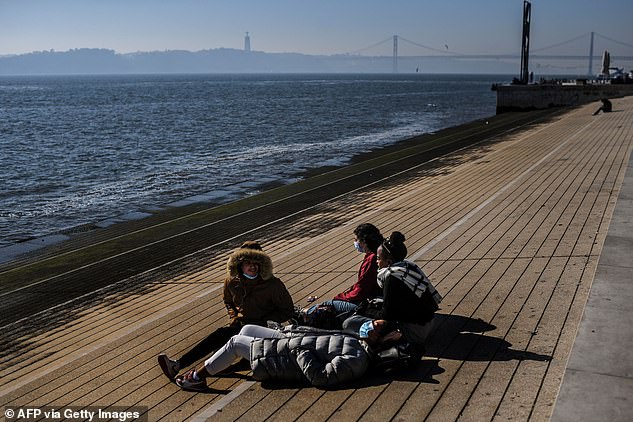 He added that scientists will know ‘in the next few days’ whether the ban has had ‘a significant effect’.

New rules requiring travellers arriving in England to have a negative coronavirus test have been delayed ‘to give international arrivals time to prepare’.

The requirement for passengers arriving in England by boat, train or plane – including UK nationals – to test negative for Covid up to 72 hours before leaving the country of departure was due to come into force at 4am today.

But it has been pushed back until the same time on Monday, amid concern that guidance on which tests would be accepted had not been published early enough.

Yvette Cooper, chairwoman of the Commons Home Affairs Committee, described the delay in introducing the new rules as ‘truly shocking’.

She said last night: ‘Questioned PM repeatedly today on why border testing/quarantine is weaker than other countries. Repeatedly he said Government is bringing in new testing (months later than elsewhere but due Friday). But now it’s not. More delays. As they haven’t published guidance in time.’

‘Yet again we’ve got a Prime Minister and a Government that’s late, slow and even now, at the 11th hour, they’re putting testing back another few days’ he told reporters during a visit to a mass vaccination centre in Stevenage.

Downing Street defended the delay, with the Prime Minister’s spokesman saying the testing law would come into place today as planned but that a ‘grace period’ would allow passengers ‘a little bit more time’ to get the tests required.

Paul Charles, chief executive of travel consultancy The PC Agency, said: ‘This saga is yet another lesson to Government that it takes time to implement major changes to border controls and they can’t be rushed through.’

Travellers will need to present proof of a negative test result to their carrier on boarding, while the UK Border Force will conduct spot checks on arrivals.

New arrivals who flout the rules will face a minimum £500 fine, while the operator who transported them will also be fined.

Dr Tildesley added that the new ‘more transmissible’ coronavirus variant found in Brazil was ‘first detected in travellers going to Tokyo’ before it was traced back to South America.

He said although scientists ‘don’t believe there is anything to worry about’ in terms of vaccine efficacy, the higher transmissibility could mean ‘people potentially might end up developing severe symptoms more rapidly which could cause more issues with our health service’.

Asked if the Brazilian mutant of coronavirus was in the UK now, Mr  Shapps told BBC Radio 4’s Today programme: ‘Not as far as we are aware, I think, at this stage.

‘There haven’t been any flights that I can see from the last week from Brazil, for example.’

The move came as the latest figures showed the number of people across the UK to have received the first dose of a Covid-19 vaccine has passed 2.9 million.

Public Health England (PHE) also released data showing infection rates had fallen in most regions of England across all age groups apart from the over 80s, in a further sign that lockdown measures are having an impact.

At the same time, however, the PHE surveillance report noted that there were more people being admitted to hospitals and intensive care units.

NHS England said around one in five major hospital trusts in England had no spare adult critical care beds on January 10.

The time lag between a fall in cases and an impact on the death toll means grim figures are likely to remain a factor for some time.

The latest official figures showed a further 1,248 people had died within 28 days of testing positive for Covid-19 in the UK as of Thursday.

Meanwhile, Boris Johnson is coming under renewed pressure from Tory lockdown sceptics to set out how he will ease the restrictions on people’s liberties as cases come down.

Former minister Steve Baker – who co-ordinated opposition to Theresa May’s Brexit deal – suggested Mr Johnson’s leadership would be ‘on the table’ if there was not a change of direction.

He urged colleagues on the Covid Recovery Group to make their views known to the chief whip, saying: ‘People are telling me they are losing faith in our Conservative Party leadership because they are not standing up for our values as a party.

‘If we continue forward with a strategy that hammers freedom, hammers the private sector, hammers small business owners and hammers the poor, inevitably the Prime Minister’s leadership will be on the table: we strongly do not want that after all we have been through as a country.’

After his comments leaked, Mr Baker later tweeted: ‘I am clear Boris is the only person to lead us out of these difficulties and I support him in that endeavour.’

** Are you a Brit stuck abroad? Please email MailOnline at: [email protected] **