A British teenager may have been paralysed after he hit his head on the bottom of a swimming pool during the first hours of his holiday in Spain.

The 19-year-old injured himself while diving head-first into a shallow pool at the Oceans Beach Club during a night out in Magaluf around 1.30am Tuesday.

Paramedics rushed to the scene to treat the man for a spinal injury and head wound, before unconfirmed local reports suggested he may have been paralysed. 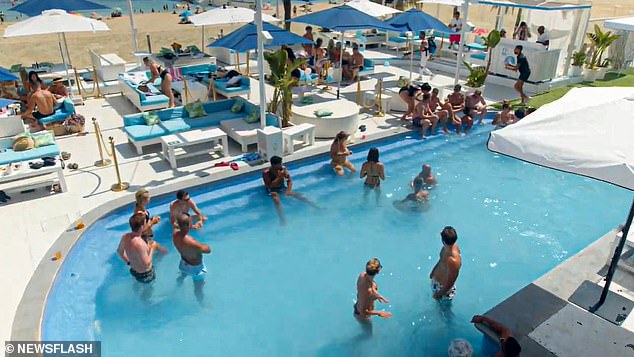 It is thought the part of the pool he jumped into was only a foot and a half deep.

His condition when he was taken to Son Espases Hospital in the island capital Palma was described as ‘serious.’

On May 12 a 34-year-old British tourist plunged to his death from the seventh-floor of his hotel in the Majorcan party resort of Magaluf.

Witnesses filmed his fall after spotting him risking his life pacing up and down a narrow ledge on the outside of his balcony at the four-star Melia South Beach Hotel.

Police said he had been drinking before the 8.30am plunge and sources said he may have taken drugs.

Later the same day a Dutch tourist died after hurling himself off a cliff in a tombstoning stunt in front of his partner and two children.

He was later named as a former footballer called Mourad Lambrabatte.

A post-mortem revealed he had drowned in a state of semi-consciousness after hitting the water.

At the start of May a 50-year-old Irish tourist was rushed to hospital in a ‘serious’ condition after falling from a second-floor apartment in Santa Ponsa near Magaluf.