British Airways cancels ‘almost 100 per cent’ of its 1,700 UK flights and tells customers not to turn up at airports today and tomorrow as pilots walk out in their first ever strike despite 11.5 per cent pay rise offer

British Airways has urged its passengers not to turn up at airports today and tomorrow after pilots walked out in their first ever strike.

Nearly 300,000 travellers have been affected by the walkout which the airline said had cancelled ‘almost 100 per cent’ of its 1,700 scheduled flights.

Members of the British Airline Pilots Association (Balpa) went on strike from midnight this morning until Wednesday amid a long-running dispute over pay. 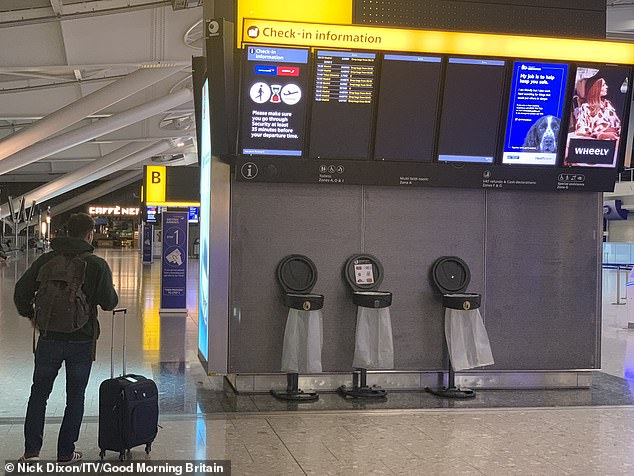 BA has told passengers that if they have a flight booked today and tomorrow, it is likely they will not be able to travel as planned.

Further action is set for September 27 if the row remains unresolved, and passengers could even face more pilot strikes over Christmas.

Only ten departures were listed at London Heathrow this morning. Pilots have already rejected a pay rise of 11.5 per cent over three years, plus a 1 per cent bonus.

BA chief executive Alex Cruz has said this would push the total average package for captains, including allowances and bonuses, above £200,000.

Mr Cruz told ITV’s Good Morning Britain: ‘I absolutely hate that our customers and our colleagues are being affected in this way.

‘Today we’re making money and indeed this 11.5 per cent plus an additional 1 per cent for this year pay increase reflects that the company is making money, sharing on those profits, way above inflation salary rates. 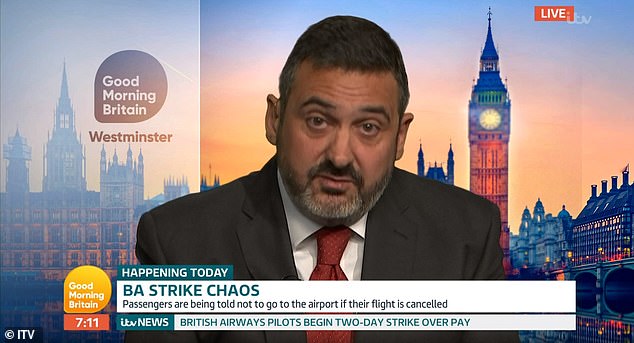 British Airways chief executive Alex Cruz told ITV’s Good Morning Britain today: ‘I absolutely hate that our customers and our colleagues are being affected in this way’

‘So we are responding to the situation that British Airways is in right now.’

How BA passengers could face more chaos over Christmas

British Airways passengers could face more pilot strikes over Christmas as part of a long-term campaign of chaos over pay.

The Balpa union said yesterday that BA’s failure to meet its demands during the long-running dispute could lead to a ‘damaging escalation’.

Balpa said its members – including captains paid an average of £167,000 – are prepared to take part in further strikes until its mandate for action ends in January.

With another strike already scheduled for September 27, Balpa said yesterday: ‘Our ballot allows us to take action at any time.’

Higher-earning pilots have reportedly discussed sustaining months of industrial action by crowd-funding among themselves to help less senior members.

Strikes during the hectic Christmas holiday period would be hugely problematic for the airline.

He added: ‘Our pilots are the best airline pilots in the world and they do have compensation which is aligned with their performance. This particular deal does reflect that fantastic performance that our pilots provide.’

BA said in a statement this morning: ‘We understand the frustration and disruption Balpa’s strike action has caused our customers.

‘After many months of trying to resolve the pay dispute, we are extremely sorry that it has come to this. We remain ready and willing to return to talks with Balpa.

‘Unfortunately, with no detail from Balpa on which pilots would strike, we had no way of predicting how many would come to work or which aircraft they are qualified to fly, so we had no option but to cancel nearly 100 per cent of our flights.’

Customers have been offered refunds or the option to re-book to another date of travel or alternative airline. BA operates up to 850 flights a day.

The airline has said it was ‘ready and willing’ to resume talks with the union, but there is little or no sign of the deadlock being broken.

The industrial action began at midnight, with knock-on effects expected for services on Wednesday.

The worst disruption is expected at Heathrow, where 93 per cent of BA’s pilots are based, with the rest at Gatwick. 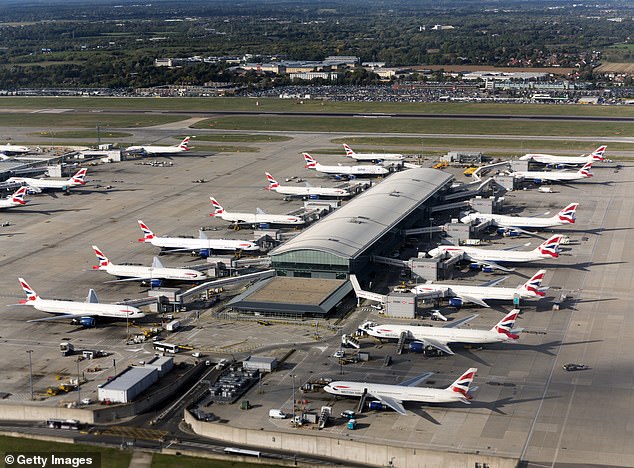 The airline has accused Balpa of issuing ‘inflated’ demands for extra bonuses and perks worth an additional £50million.

BA has been criticised over its handling of the crisis. The firm has insisted that most passengers have been provided with refunds or re-booked on alternative flights.

But many have complained that the chaos has forced them to cancel holidays.

Balpa general secretary Brian Strutton said: ‘British Airways needs to wake up and realise its pilots are determined to be heard.

‘They’ve previously taken big pay cuts to help the company through hard times. Now BA is making billions of pounds of profit, its pilots have made a fair, reasonable and affordable claim for pay and benefits.

‘Balpa has consistently offered up chances for the company to negotiate a way forward. British Airways must now put the needs of its staff and passengers first and accept that its pilots will not be bullied or fobbed off. 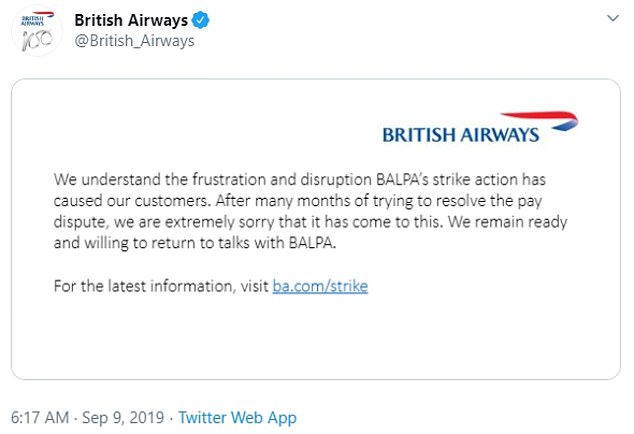 BA has told passengers that if they have a flight booked today and tomorrow, it is likely they will not be able to travel as planned. The airline posted this tweet to customers this morning

‘The company’s leaders, who themselves are paid huge salaries and have generous benefits packages, won’t listen, are refusing to negotiate and are putting profits before the needs of passengers and staff.

‘This strike will have cost the company considerably more than the investment needed to settle this dispute. It is time to get back to the negotiating table and put together a serious offer that will end this dispute.’

Balpa said the strike will cost BA £40million a day, claiming the dispute could be settled for £5million.

A Balpa statement said: ‘BA’s belligerent attitude is going to cost them, their shareholders and their passengers far more than resolving this dispute via negotiation would. It is precisely that attitude which has caused so much anger and frustration amongst BA’s own staff members. 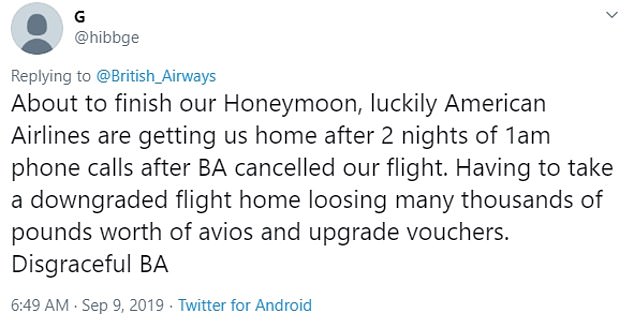 The union says pilots took sacrifices in hard times to support their company and deserve a ‘small fraction’ of BA’s profits.

A BA spokesman said later: ‘Nearly half of Balpa members joined BA after the 2008 economic crash so they did not make any financial sacrifices.

‘Since then, the aviation industry has become ever more globally competitive. We have had to make some difficult decisions to create the strong financial platform we now have, and which provides stability for our entire workforce, including pilots.

‘Because of this we are now able to invest £6.5 billion over the next four years across BA, including 73 new aircraft bringing new opportunities for career progression for our pilots, as well as a secure future at BA.’

The union wants BA, which made a profit of £2billion last year, to give pilots a share of profits.

Balpa – which represents around 90 per cent of BA pilots – accused the airline of ‘belligerence’ yesterday, claiming ‘fat cat’ bosses shunned an opportunity to end the impasse at arbitration talks on Friday.