Britain’s Got Talent winner Colin Thackery’s 25 year military career saw him narrowly avoid capture as he fought alongside 100,000 UK troops in the so called ‘Forgotten War.’

The 89-year-old army veteran was posted to Korea in 1950 and saw action at the Battle of the Imjin River, which were some of the bloodiest days of the conflict.

The Chelsea Pensioner, who became the oldest winner of the ITV show last night, was deployed with the 45th regiment of the Royal Artillery, the Queen’s Army.

He is now set for a mega money record deal after winning the contest and wowing audiences with his songs in tribute to his late wife Joan.

It can now be revealed that during his time fighting in the Korean War, he told how he saw frozen dead enemy soldiers, permanently damaged his hearing, and suffered frostbite in his leg.

He had the job as a forward observer, crawling forward into advanced positions always under threat from attack to carry out and direct gunfire towards enemy targets. 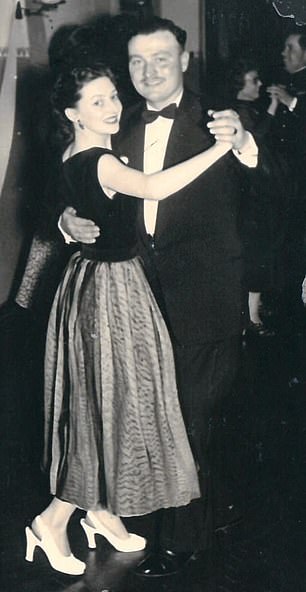 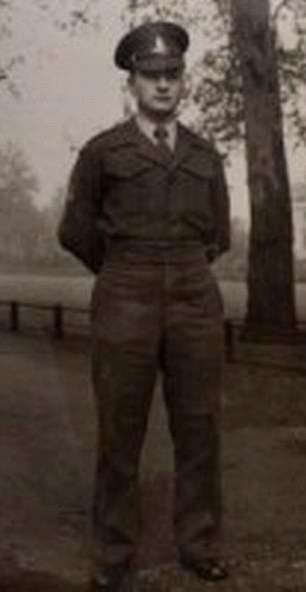 Colin, who was one of 100,000 British servicemen sent to the Korean Peninsula, with his wife Joan (left) and when he first signed up to the army (right)

The spotlight is now on Colin’s distinguished military background after he won the hearts of a nation with his performances in tribute to his late wife Joan.

His distinguished service saw him posted to Korea, Malaya and Hong Kong after he joined the army when he was just 15-years-old.

It was while he was n the military that he met his wife Joan, at an Army camp dance in County Durham.

They married in 1950, but just two weeks after the wedding he was posted to Korea, as part of a United Nations force after North Korea invaded the South in June of that year. 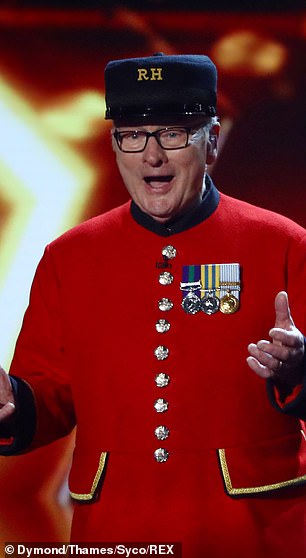 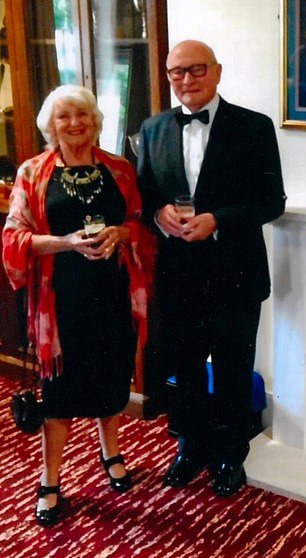 Colin (left, singing on the show) served during the Korean War, and his distinguished military career is now in the spotlight after he won with his performances in tribute to his late wife Joan (right, with his wife)

Speaking to the Daily Telegraph in October last year, Colin told how he was close to capture at the Battle of Imjin River.

For three days, between April 22 and 25, The Gloucestershire Regiment – dubbed the ‘Glorious Glosters’ repelled Chinese enemy soldiers, who were fighting for the North.

Some 750 men of the battalion fought of successive assaults by a force seven times bigger.

Some 620 failed to make it back, a third of the battalion were killed or wounded, with the survivors spending the next two years in Chinese or North Korean prison camps.

In all some 4,000 british troops held of 27,000 Chinese attackers, and stopped their advance on Seoul to the south. 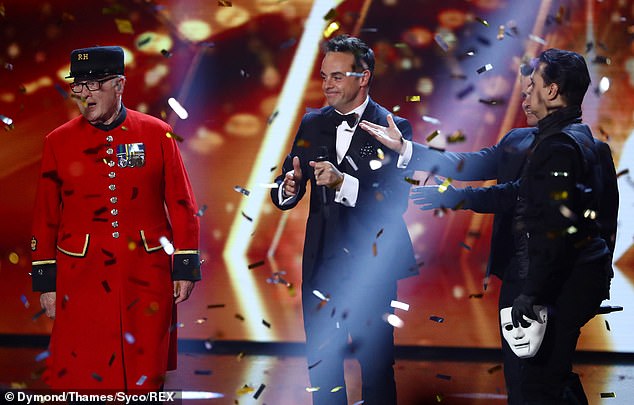 Speaking to the Daily Telegraph in October last year, he revealed: ‘When I got to Korea we were in battle for a while, then all of a sudden there was going to be peace so we were told to dig in and make ourselves comfortable.

‘The brigadier said to all the officers in the brigade, ‘Get me those young men in the concert party’. My orders were to assemble and go round and entertain.’

‘I was sent back from concert duty. I got back to my unit and the old man said go and get some batteries, because they (the Glosters) are surrounded.

I went haring off in a Jeep for the batteries and on the way back the MPs (Military Police) stopped me and said ‘You ain’t going anywhere, mate, they’re surrounded. No good you going up there, you’ll be taken.’

‘The rest of them were taken prisoner. I missed it by not being able to get back.

‘There was a feeling of wanting to be there with the chaps but then realising a bit of self-preservation really. It was a good thing I wasn’t going into the bag.” 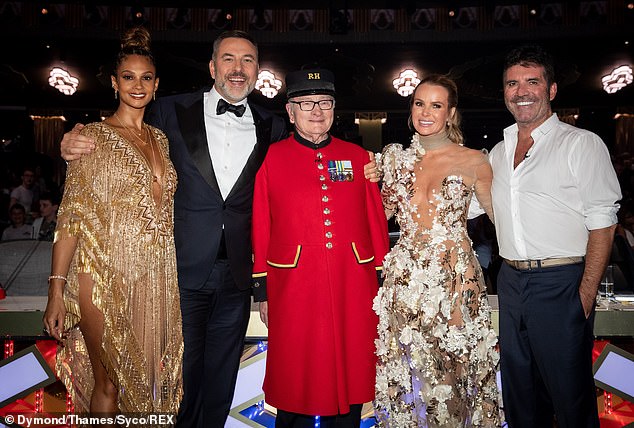 Colin, pictured with the Britain’s Got Talent judges, declared he could ‘die happy’ if he won the series. The prize for the show is £250k plus a slot at the Royal Variety Performance, singing before the Queen

Speaking to the Daily Telegraph in 2013, Colin told how he got frostbite on one leg and was partially deafened by artillery fire.

He said: ‘My memory of it first of all is the extreme cold.

‘I was up in the mountains and that’s where we really learnt the meaning of wind chill.’

His son Peter, 58, from Horsley, Surrey, told The Mirror: ‘At one point there was an explosion overhead. Dad lost his hearing for three days and it was permanently damaged.’

He also has reduced mobility thanks to suffering frostbite in Korea, which resulted in lymphedema. To this day he still suffers from the frostbite and takes penicillin.

He told how they had taken over some Chinese trenches, and was told to take sentry duty.

He told the Telegraph: ‘It was getting dark and I was sitting in this thing with my headset on making my reports and responding on the radio.

‘This big Yorkshireman came in, reached over and said ‘cup of tea’ then ‘who’s your friend?’ I looked round and there, sitting next to me, was a dead Chinese man, frozen solid.’

During the Korean War more than  more than 1,000 British servicemen were killed and 1,060 taken prisoner.

An Armistice was signed on July 27, 1953, but the peninsula remains divided.

Despite the British casualties, it is seen by many veterans as ‘The Forgotten War’.

It came in the years between the Second World War and Vietnam and the war weary British public had little interest in further conflict.

‘I often wonder what it was all about.”

Two years after he was sent to Korea, he was posted to Hong Kong, and his wife Joan eventually joined him.

Peter told how his father’s musical career blossomed during his years in the army, as it was where he was taught how to play the bugle and drum, and started singing.

After returning to Britain with Joan the couple settled in Norwich. They had two children, Peter and Dawn, and have four grandchildren.

After his wife died from breast cancer in December 2016, he moved to the Royal Hospital Chelsea with the Chelsea Pensioners.

In his first audition he sang Wind Beneath My Wings, leaving the audience in tears.

Talking about what his wife would have made of it, he told The Mirror: ‘Well, first of all, she would be highly critical, because that’s that she was.

‘Joan had a very good alto voice. In fact, we both sang together in an operatic society. She would have been highly critical, if I’d done anything wrong.

‘She was typical northern girl, they don’t say a lot, but they think a lot. But she would have been delighted.’

Peter added: ‘Dad joined the Army so young and is one of the few boy soldiers left alive from that period.

‘Performing for royalty would mean so much to him. He says how it would be just wonderful singing for them.

‘The Army was very good to my dad and he loves the Army.

‘He had a difficult East End background – money was tight, it was wartime and he didn’t have the best education.

‘The Army was mother, father and sister to him.’

Peter, 58, told the Mirror how the songs his father performed were an emotional reminder of the time Colin sang Wing Beneath My Wings to Joan on their 50th wedding anniversary

He said: It’s bittersweet. It’s tough because it wasn’t that long ago we lost Mum. But it’s also very sweet hearing Dad talk about how he feels about her.’

Speaking after he was crowned this year’s champion last night, he said: ‘I am stuck for words for a change. Thank you very much, all of you, all the backing I’ve had.’

Earlier in the show he declared he could ‘die happy’ if he won the series. The prize for the show is £250k plus a slot at the Royal Variety Performance, singing before the Queen.

He added: ‘I have served her for 25 years, to sing in front of her would be a dream come true.’

After his rendition of Love Changes Everything earlier in the evening, judge Amanda Holden appeared to predict the show’s outcome, commenting: ‘You are unbeatable. You’re a gentleman, I respect you, you inspire me, everyone loves you.’

In June 1950 fighting broke out between the communist North and capitalist South, sparking a brutal war that killed between two and four million people.

Beijing backed Pyongyang in the three-year conflict, while Washington threw its support behind the South — alliances that have largely endured.

The Koreas have been locked in a dangerous dance ever since that conflict ended in 1953 with an armistice rather than a formal peace treaty, leaving them technically at war.

Pyongyang has tested the fragile ceasefire with numerous attacks.

The secretive nation sent a team of 31 commandos to Seoul in a botched attempt to assassinate then-President Park Chung-Hee in 1968. All but two were killed.

In the ‘axe murder incident’ of 1976, North Korean soldiers attacked a work party trying to chop down a tree inside the Demilitarized Zone, leaving two US army officers dead.

Pyongyang launched perhaps its most audacious assassination attempt in Myanmar in 1983, when a bomb exploded in a Yangon mausoleum during a visit by South Korean President Chun Doo-hwan. He survived but 21 people, including some government ministers, were killed. 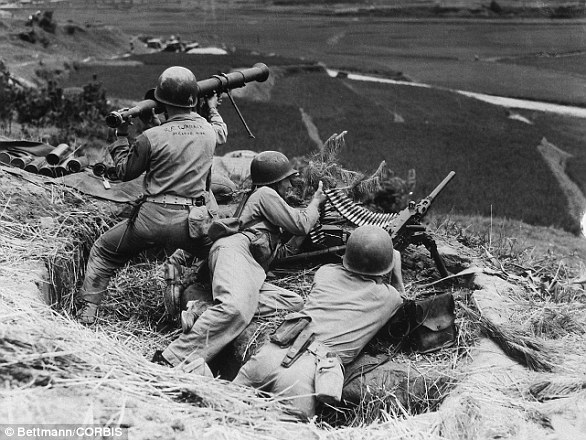 U.S. Marines covering the road leading to the front lines in South Korea in 1950

In 1987 a bomb on a Korean Air flight exploded over the Andaman Sea, killing all 115 people on board. Seoul accused Pyongyang, which denied involvement.

The North’s founding leader Kim Il-Sung died in 1994, but under his son Kim Jong-Il it continued to prod its southern neighbor.

In 1996 a North Korean submarine on a spying mission ran aground off the eastern South Korean port of Gangneung, sparking 45-day manhunt that ended with 24 crew members and infiltrators killed.

A clash between South Korean and North Korean naval ships in 1999 left some 50 of the North’s soldiers dead.

In March 2010 Seoul accused Pyongyang of torpedoing one of its corvette warships, killing 46 sailors. Pyongyang denied the charge.

November that year saw North Korea launch its first attack on a civilian-populated area since the war, firing 170 artillery shells at Yeonpyeong. Four people were killed, including two civilians.

North Korea has steadfastly pursued its banned nuclear and ballistic missile programs since its first successful test of an atomic bomb in 2006, as it looks to build a rocket capable of delivering a warhead to the US mainland.

Its progress has accelerated under leader Kim Jong-Un, culminating in its sixth and biggest nuclear test in September 2017.

Kim has since declared the country a nuclear power.

Despite the caustic effect of clashes and the battery of conventional weapons that the North has amassed at the border to threaten Seoul, the two nations have held talks in the past.

Then North Korean leader Kim Jong-Il held two historic summits with counterparts from the South in 2000 and 2007, which eased tensions between the neighbors.

Lower-level talks since then have been much hyped but failed to produce significant results.