Shops, bars, clubs, hotels, restaurants, gyms and hair salons would be among nearly 700,000 companies eligible for new direct cash grants of up £18,000.

Sunak will also raise income tax by £6 billion, The Times reported on Sunday. 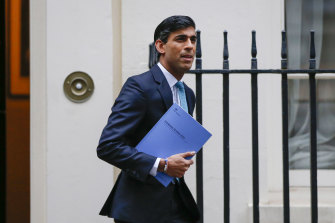 The chancellor will say he needs to raise more than £40 billion to tackle the budget deficit and protect the economy from rising rates of interest on government borrowing, the report said.

The government said the latest round of funding takes the total spent on direct grants to businesses during the crisis to £25 billion.

Encouraged by the rapid roll-out of vaccines, British Prime Minister Boris Johnson has unveiled a route out of lockdown for England. However, some businesses will need to remain shuttered until the summer.

“There’s now light at the end of the tunnel and this £5 billion of extra cash grants will ensure our high streets can open their doors with optimism,” said Sunak.

Local authorities in England will also get an extra £425 million to distribute grants to businesses not eligible for the restart grants, while the devolved administrations in Scotland, Wales and Northern Ireland will receive £794 million of extra funding.

The government has already racked up more than £280 billion in coronavirus spending and tax cuts, pushing Britain’s borrowing to its highest level since World War Two.

While Sunak’s March 3 budget will include more spending to prop up the economy during what he hopes will be the last phase of lockdown, he will also probably signal tax rises ahead to plug the huge hole in the public finances.

In an interview with the Financial Times, Sunak said he would use the budget to level with the public over the “enormous strains” in the country’s finances, warning that a bill will have to be paid after further coronavirus support.

Earlier on Saturday the government said Sunak is also expected to announce an initial £12 billion of capital and 10 billion pounds of guarantees for the new UK Infrastructure Bank.

A London Telegraph report said Sunak is also weighing up bringing back the small profits rate, axed by George Osborne in 2014, to support small to medium-sized companies.