Better start building an ark! Britain is hit by 103 flood warnings and alerts with some areas suffering two inches of rain in 12 hours as downpours sweep country

Britain has been hit by 103 flood warnings and alerts after heavy downpours hit parts of the country.

As a band of rain sweeps across the UK on Saturday, January, 7, there were 24 flood warnings and 79 flood alerts.

It comes after the Met Office issued yellow weather warnings for rain in Wales and south-west England overnight.

It forecast that ‘many’ places had been expected to see around an inch of rainfall over six to nine hours, with around two inches falling over higher ground. 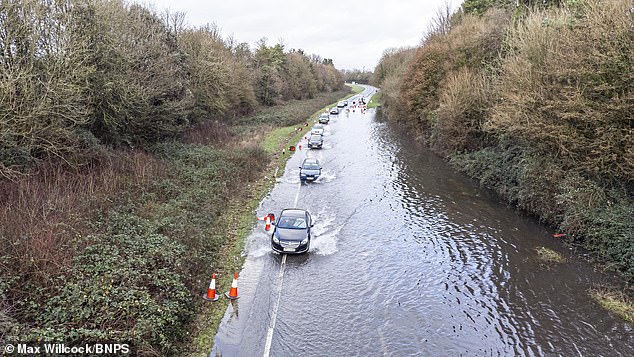 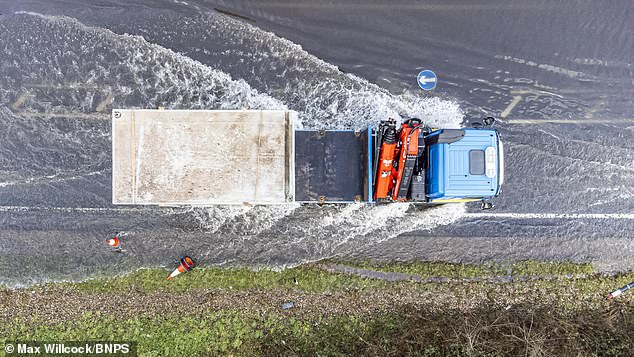 It forecast that ‘many’ places had been expected to see around an inch of rainfall over six to nine hours, with around two inches falling over higher ground. This lorry driver is chancing his bets while driving near Salisbury

South Wales was hit by heavy downpours in the 12 hours to 9am Saturday.

Libanus and Gorslas had just under two inches  of rain. There was ‘significant rainfall’ in south-west England at the same time, said Met Office meteorologist Alex Burkill.

This included the inch of rain which hit Harbertonford and the inch downpour in Cornwood overnight.

Recent rain had made some areas ‘more susceptible’ to disruption, said Mr Burkill.

He said: ‘The rain was heavy but I think it was that it lasted for quite a long period of time.

‘It was quite a big band of rain that slowly moved across the UK. It was less the intensity of the rain but how long it lasted which led to those rainfall totals building up. 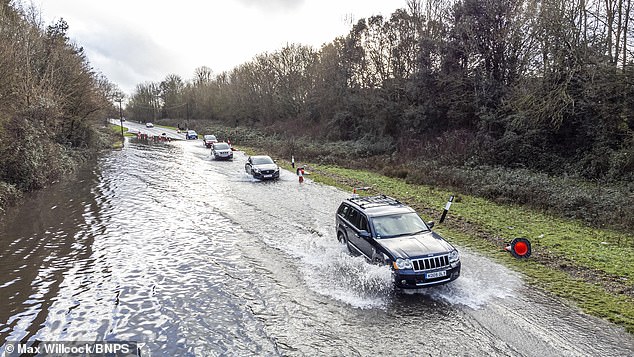 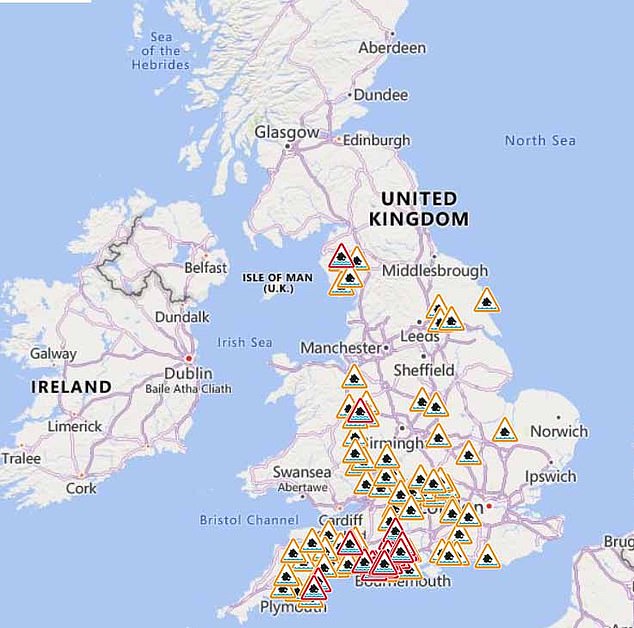 ‘It has come off the back of some unsettled weather as it has not been very dry recently and so river catchments everywhere are quite saturated – that would have made any problems worse.’

Further ‘unsettled weather’ is set to come this weekend, which could see some heavy cloud and rain replaced by a mixture of sunshine and showers.

Heavy wind and rain has caused disruption on local roads in Cornwall and Devon, prompting police to urge drivers to be careful, according to Cornwall Live.

It reported a message from police in Callington which said: ‘Good morning! The weather isn’t too great today.

‘Please be careful if travelling. There is a lot of standing water on the main routes in and out of Callington. Please adjust your driving in line with the conditions! Stay safe.’

The Met Office has also said that ‘some showers (are) likely to be heavy with hail and a chance of thunder’. It could be windy and turn colder later.

The showers could be ‘heavy at times’ by Saturday night but some clear spells are likely across the east, according to the forecasters.

They added that it is expected to ‘remain windy with severe gales developing in north-west Scotland’.

Regions from western Scotland to south-west England may be hit by ‘shorter-lived but more intense’ downpours as heavy bursts of rain could see over half and inch in a few hours, said Mr Burkhill.

There may also be some ‘hefty showers’ further east.

Blustery showers are also forecast for the rest of the weekend and temperatures may drop to 9C to 10C on Sunday, down from about 14C.

Mr Burkill added: ‘The highest temperatures will be in the South but even in the North it is still going to be mid-to-high single figures so it is not going to be cold but just a bit chillier than it has been.’