Britain in the Blitz: Fascinating then and now pictures show the transformation of the worst-hit cities in Hitler’s bombing campaign

A sequence of fascinating pictures shows the transformation of the British cities that were worst hit during Hitler’s World War Two bombing campaign.

The Blitz (from the German word, ‘lightning’) – which lasted from September 1940 to May 1941 – was the most intense bombing campaign Britain has ever seen.

During the four months of the Battle of Britain, from July 1940 to October that year, RAF heroes clashed with Luftwaffe pilots in the vital fight for air supremacy – with a victory that ultimately scuppered Hitler’s planned invasion.

However, after the country had defended its shores from Hitler’s air force – its cities and ports were then battered by the Blitz. For eight months between 1940 and 1941 the country was subjected to a constant barrage of bombing from the Nazis.

Birmingham, Liverpool and Plymouth were hit eight times, Bristol six, Glasgow five, Southampton four, Portsmouth three, and there was also at least one large raid on another eight cities.

Meanwhile, London was attacked 71 times and bombed by the Luftwaffe for 57 consecutive nights.

Black and white photographs capture streets reduced to rubble in the days after the bombings and come in stark contrast to the buildings and roads that stand in the same place today. 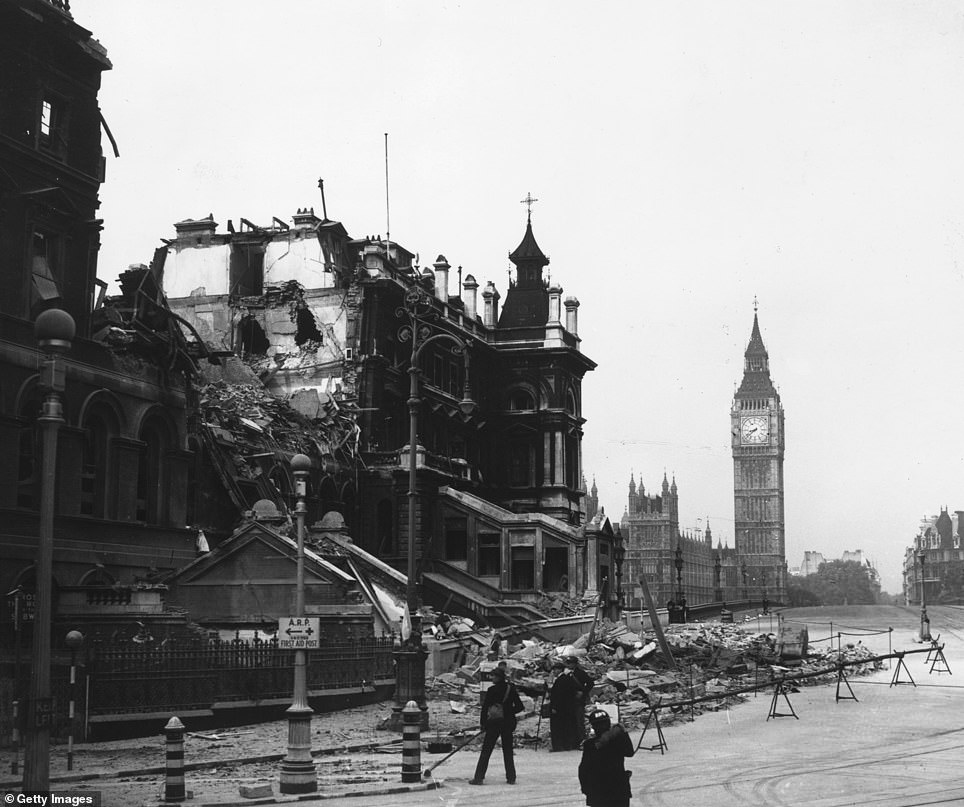 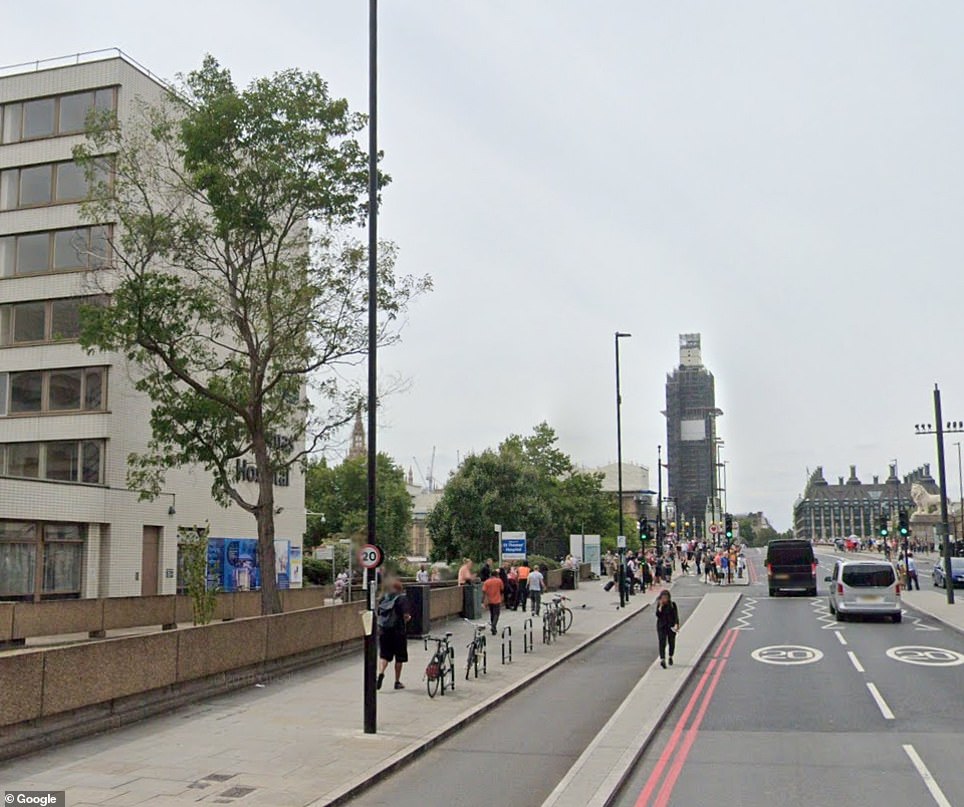 LONDON: The debris of St Thomas’s Hospital (pictured left), the morning after receiving a direct hit during the Blitz, in front of the Houses of Parliament and Big Ben and the scene today (right). The hospital was first bombed on September 8, 1940 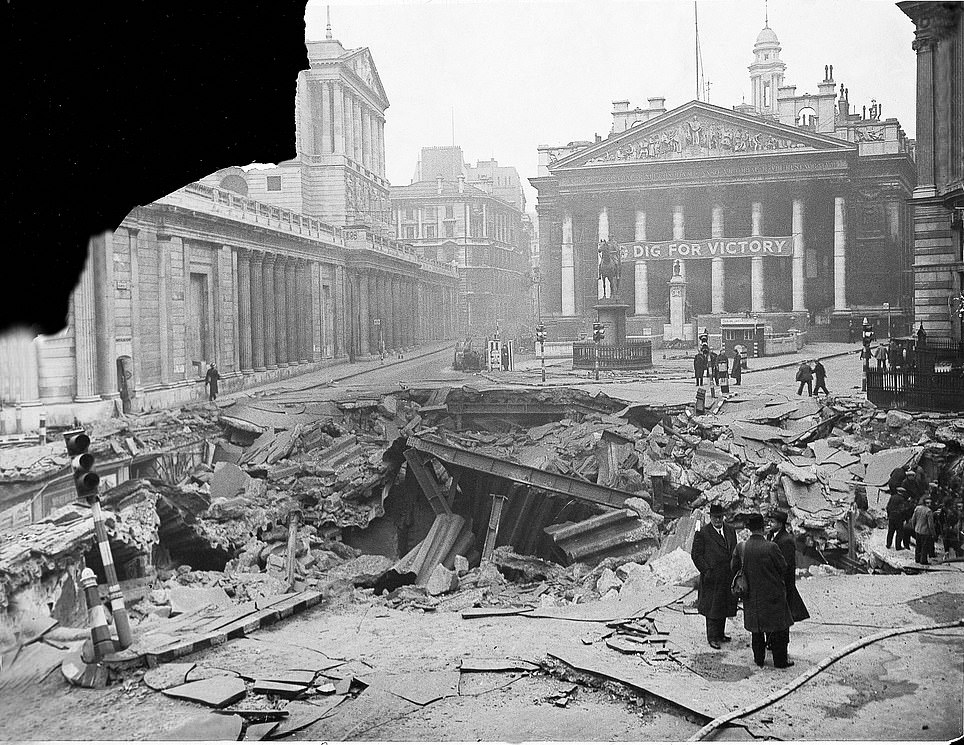 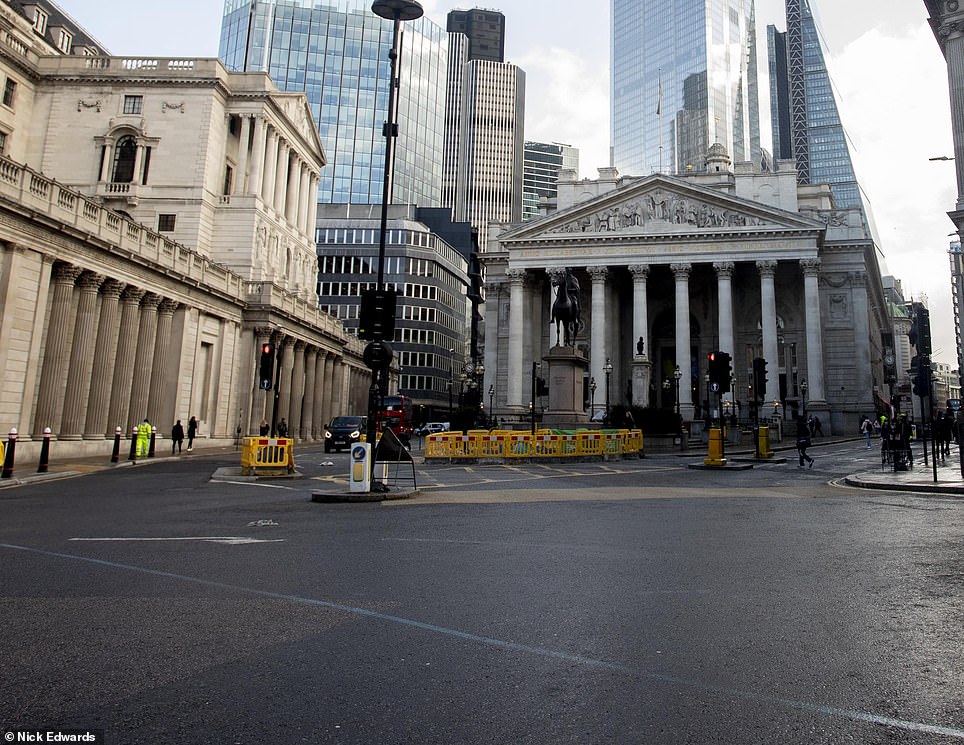 LONDON: The largest bomb crater in the capital city, left, on January 12, 1941, created when a bomb made a direct hit on the ticket hall of Bank Tube Station, killing at least fifty people. The Bank of England is seen on the far left and the Royal Exchange is pictured with a ‘Dig for Victory’ sign on it. Pictured right: Bank Station on March 12 this year 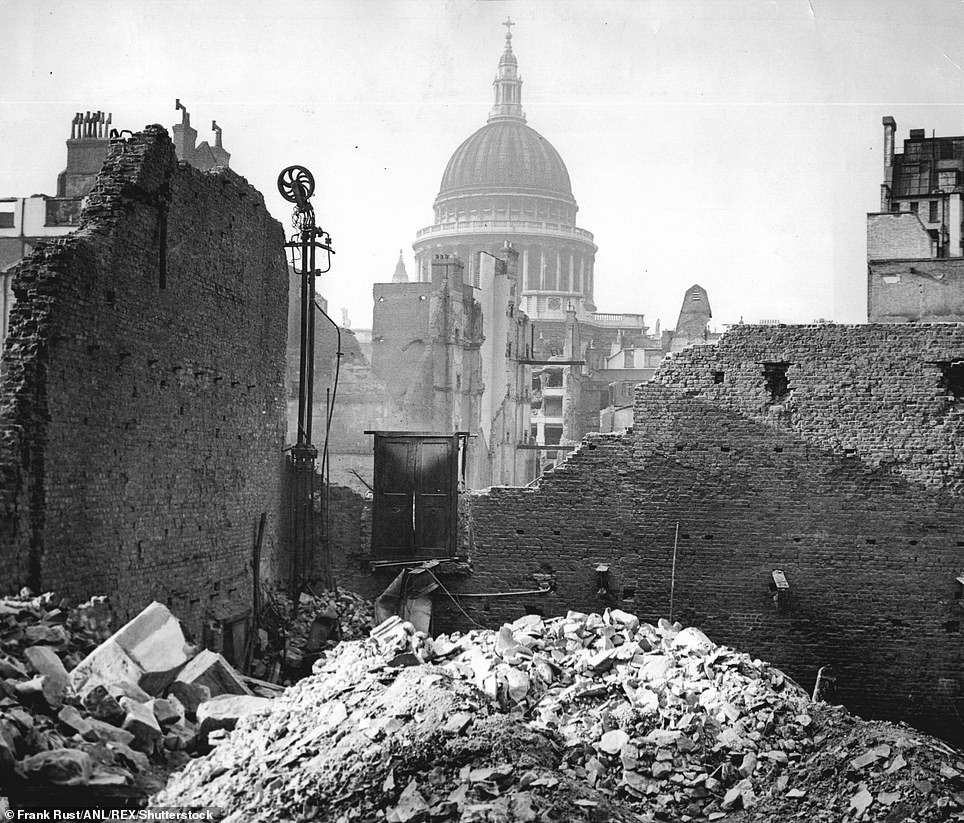 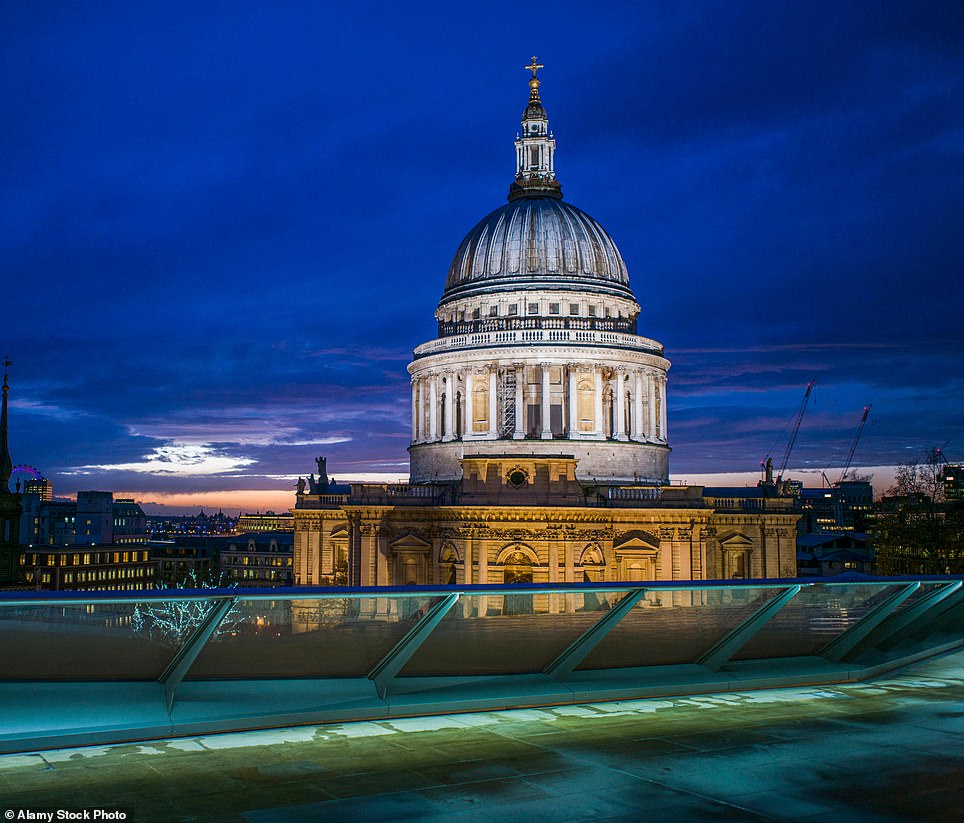 LONDON: Bomb damage to St Paul’s Cathedral as a result of World War Two air raids (left) and St Paul’s in the capital city today (right). London was attacked 71 times and bombed by the Luftwaffe for 57 consecutive nights 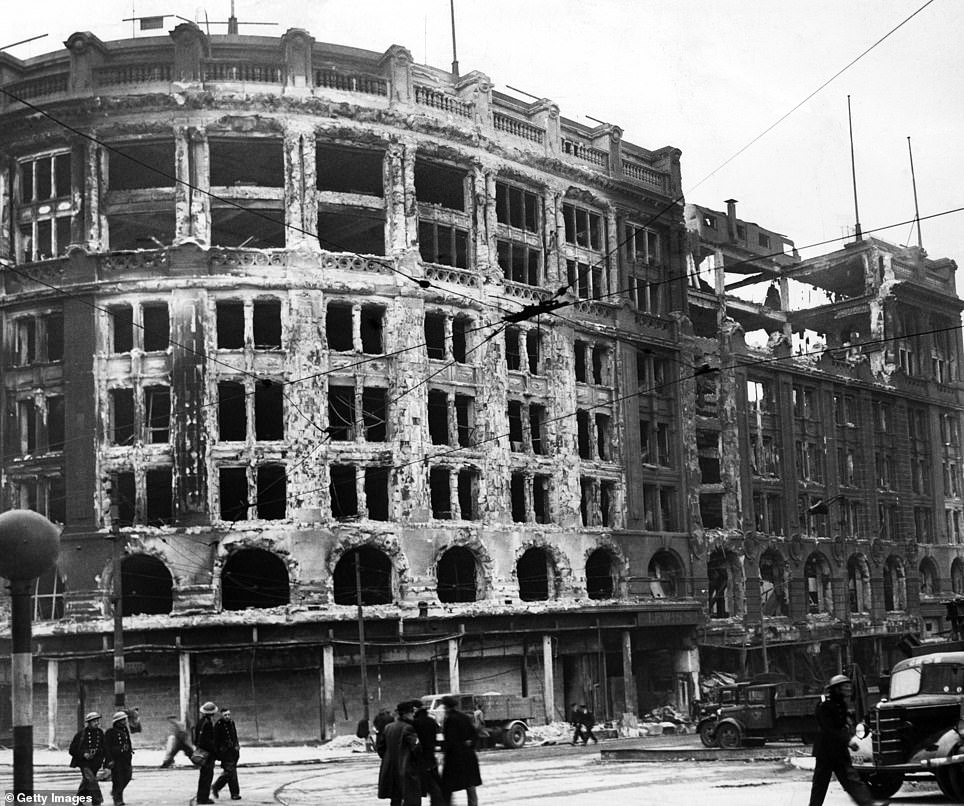 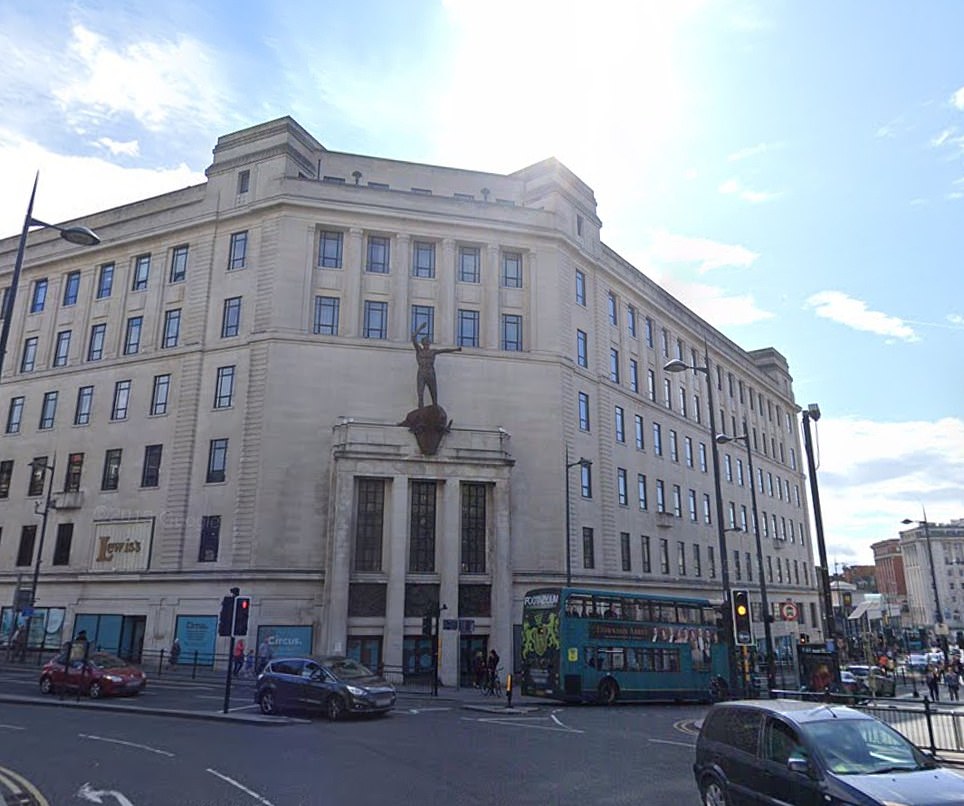 LIVERPOOL: The shell of Lewis’s building in Liverpool which earlier that day had been crowded with shoppers on May 3, 1941 (left). The building, which is still named Lewis’ and is set to be redeveloped, today (right) 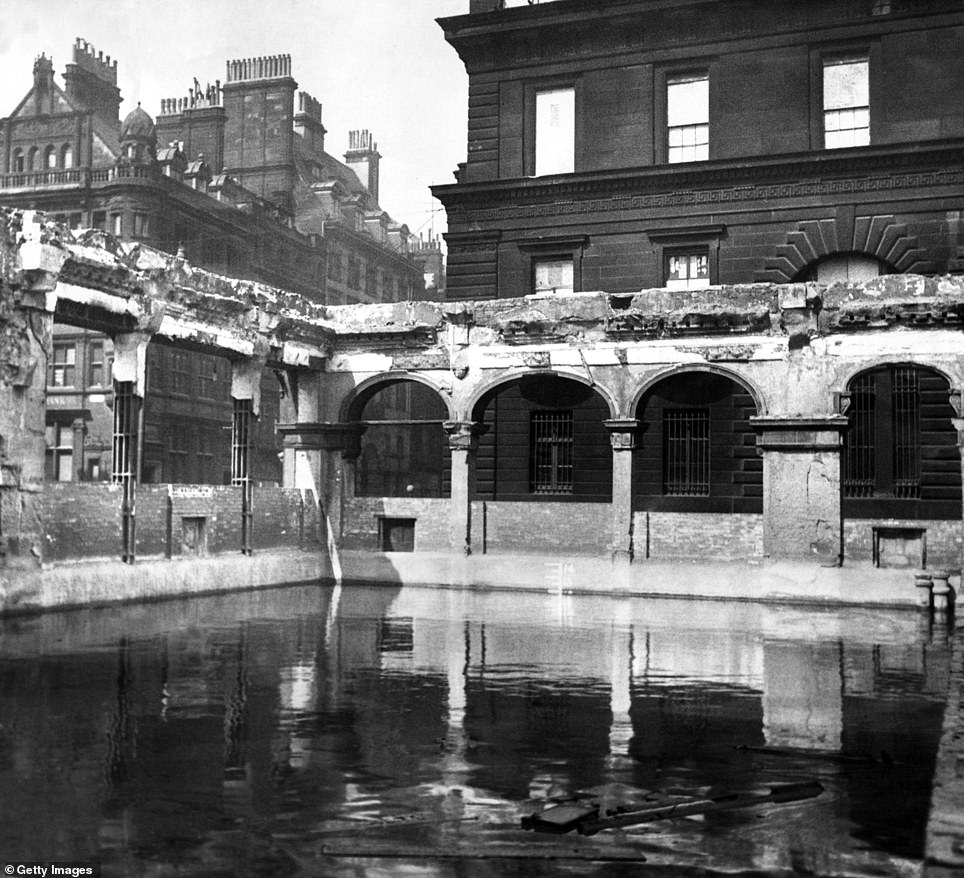 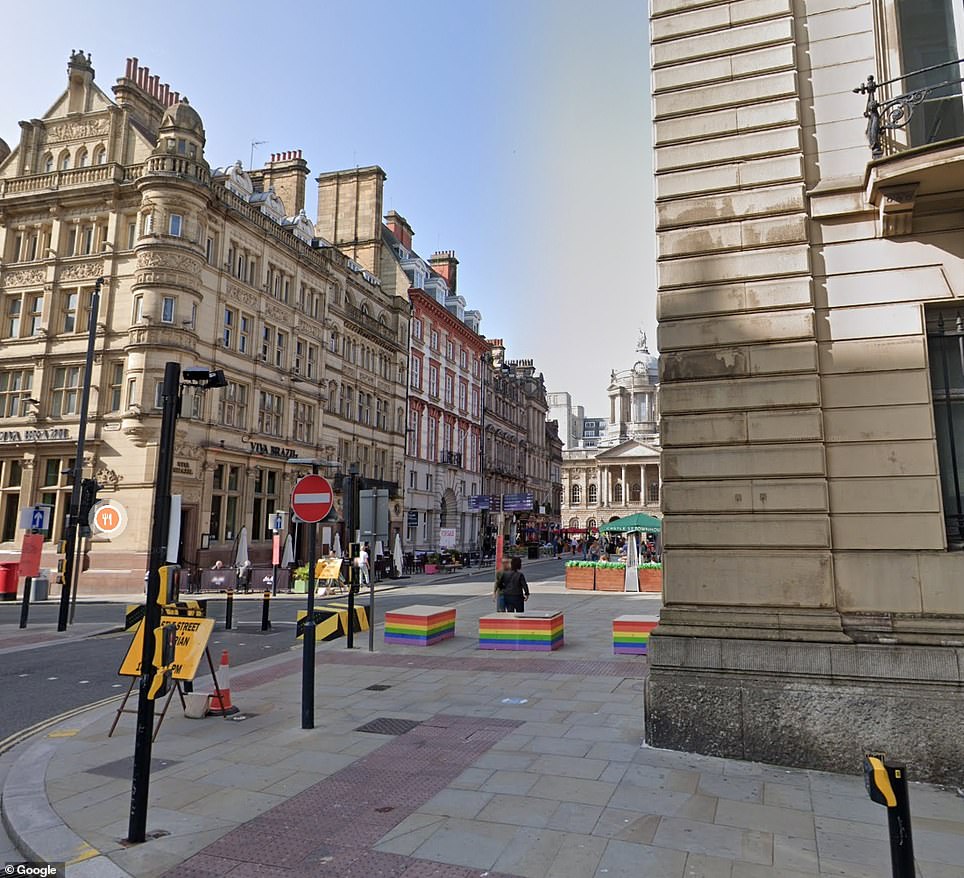 LIVERPOOL: An emergency water supply reservoir which has been established in the basement of a blitzed building in Liverpool (left) on April 20, 1942, and the scene at the corner of Cook Street and Castle street today (right)

The Blitz began on September 7, 1940, and was the most intense bombing campaign Britain has ever seen.

Named after the German word ‘Blitzkrieg’, meaning lightning war, the Blitz claimed the lives of more than 40,000 civilians.

London was attacked 71 times and bombed by the Luftwaffe for 57 consecutive nights.

The City and the East End bore the brunt of the bombing in the capital with the course of the Thames being used to guide German bombers. Londoners came to expect heavy raids during full-moon periods and these became known as ‘bombers’moons’.

More than one million London houses were destroyed or damaged and of those who were killed in the bombing campaign, more than half of them were from London.

In addition to London’s streets, several other UK cities – targeted as hubs of the island’s industrial and military capabilities – were battered by Luftwaffe bombs including Glasgow, Liverpool, Plymouth, Cardiff, Belfast and Southampton and many more.

Deeply-buried shelters provided the most protection against a direct hit, although in 1939 the government refused to allow tube stations to be used as shelters so as not to interfere with commuter travel.

However, by the second week of heavy bombing in the Blitz the government relented and ordered the stations to be opened. Each day orderly lines of people queued until 4pm, when they were allowed to enter the stations.

Despite the blanket bombing of the capital, some landmarks remained intact – such as St Paul’s Cathedral, which was virtually unharmed, despite many buildings around it being reduced to rubble.

Hitler intended to demoralise Britain before launching an invasion using his naval and ground forces. The Blitz came to an end towards the end of May 1941, when Hitler set his sights on invading the Soviet Union.

Other UK cities which suffered during the Blitz included Coventry, where saw its medieval cathedral destroyed and a third of its houses made uninhabitable, while Liverpool and Merseyside was the most bombed area outside London.

There was also major bombing in Birmingham, where 53 people were killed in an arms works factory, and Bristol, where the Germans dropped 1,540 tons of high explosives and 12,500 incendiaries in one night – killing 207 people.