Brides-to-be across the UK have been left heartbroken after a wedding venue they booked through TUI suddenly closed down.

More than 40 brides were set to get married between May and October next year at their dream wedding venue at the Holiday Village Atlantica on the Greek island of Kos.

But while trying to book rooms for friends and family, the brides found the hotel’s website and social media pages had suddenly disappeared.

Some brides have been informed that their bookings are now ‘void’ while others have been told the hotel has been put under new ownership and are taking bookings directly. 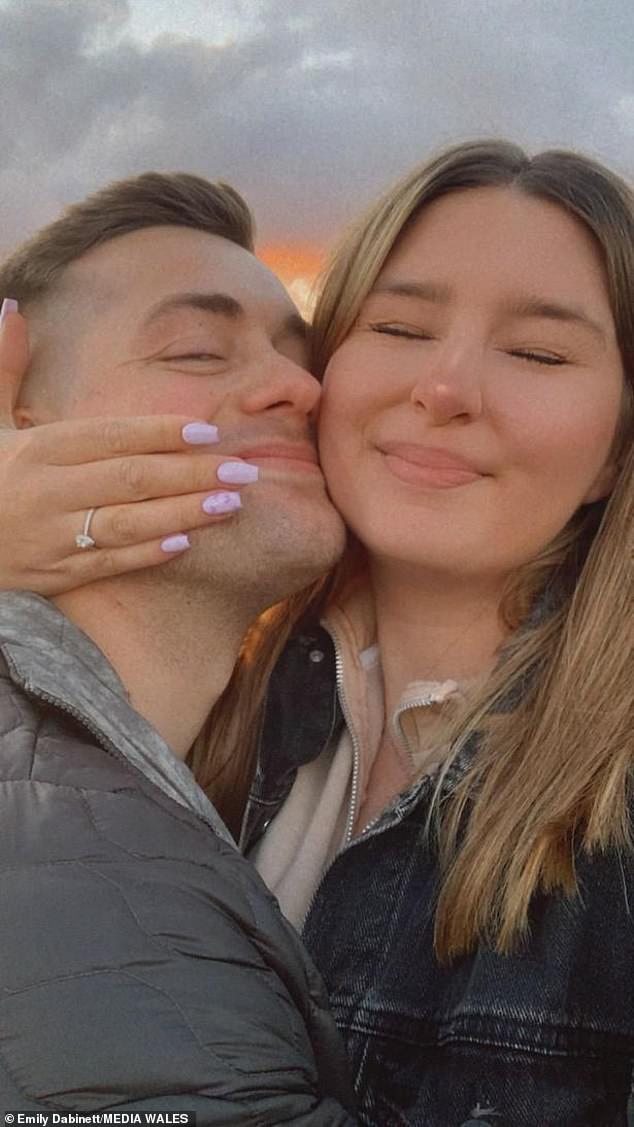 Mother-of-two Emily Dabinett (pictured) from Welshpool had also booked at the Holiday Village Atlantica Kos hotel to get married to her partner of eight years Oli, at the end of October. 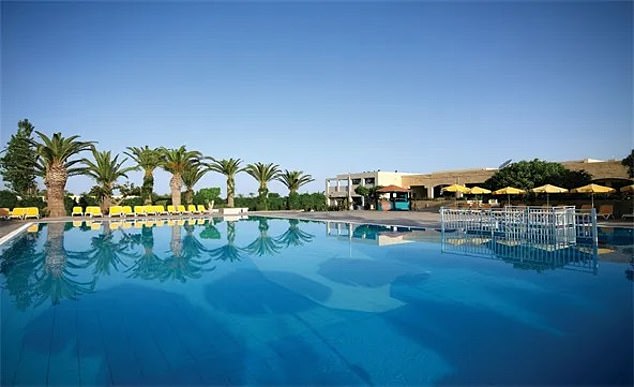 Two brides from Wales said they have received ‘no clarification’ from TUI leaving them ‘stressed and frustrated’.

Danielle Connor, a 27-year-old nursery manager from Caerphilly, is due to get married in May of next year to her partner Rhydian, with 50 to 60 guests expected to attend their special day.

The couple, who had already spent £5,000 for their wedding, decided to get married in Kos on what would be their eleventh anniversary together.

She said: ‘We’ve known for a while we wanted our wedding to be abroad.

‘But we had no correspondence from them at all. At that point, we kind of knew that something was not right. We noticed on Google that the hotel said it was permanently closed.’ 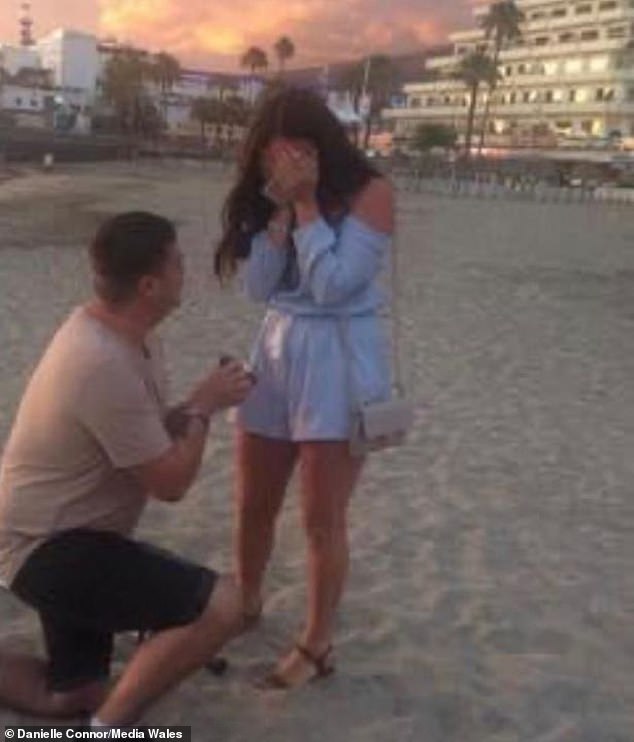 Danielle Connor, a 27-year-old nursery manager from Caerphilly, (pictured) is due to get married in May of next year to her partner Rhydian, with 50 to 60 guests expected to attend their special day

After contacting the TUI store Miss Connor was told that it was because of the winter period that the hotel was closed but she was still unable to log on and book rooms for any of her guests.

Mother-of-two Emily Dabinett from Welshpool had also booked at the Holiday Village Atlantica Kos hotel to get married to her partner of eight years Oli, at the end of October.

She said: ‘When we went with TUI, we realised that everything was in a package and we didn’t have to faff around and do something separately, we wanted something that could just do it.

‘We started the planning of the wedding in July of this year and within a month, we had been in our local TUI store twice, and then at the end of August it was all booked.

‘Once we booked that package, we were excited. All our family were coming as well – we have elderly relatives who are coming and have all paid. They had to get expensive insurance because of their age and health problems. All for the purpose of coming to our wedding, they wouldn’t go abroad otherwise.’

But in November of this year, Miss Dabinett said that as she went to book for one of her friends to stay at the hotel for her wedding, the website was nowhere to be found online. 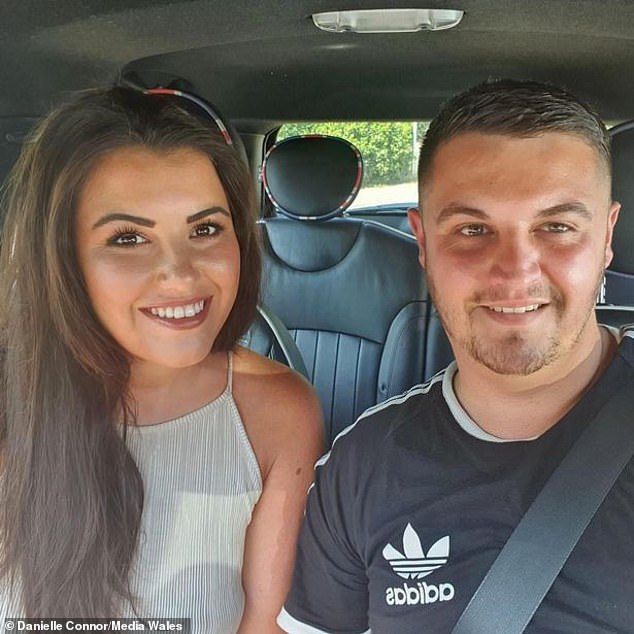 Danielle and her partner Rhydian (pictured), who had already spent £5,000 for their wedding, decided to get married in Kos on what would be their eleventh anniversary together.

‘We then found the hotelier on Facebook and asked if they could help us,’ she explained.

‘They basically said that their contracts with TUI had ended, and all the bookings were void.

‘We called the store that we booked it with and they said that it was incorrect, and they were just negotiating contracts. So I emailed the wedding planner and they said they would come back to us at the end of November, but we’ve heard nothing back from them.

‘We’ve had to call them again, they said it would be at the end of December – it was supposed to be on the 15th but that didn’t happen either. They’ve pushed it back to December 20, but other brides have been told it is now on January 5.’

Both women found each other online, alongside more than 40 brides who found them in a similar situation.

The Welsh brides said everyone had ‘been told different things’ by TUI as they try to seek clarification for their bookings, where the location will be and if it will be on the same date as they had initially planned. 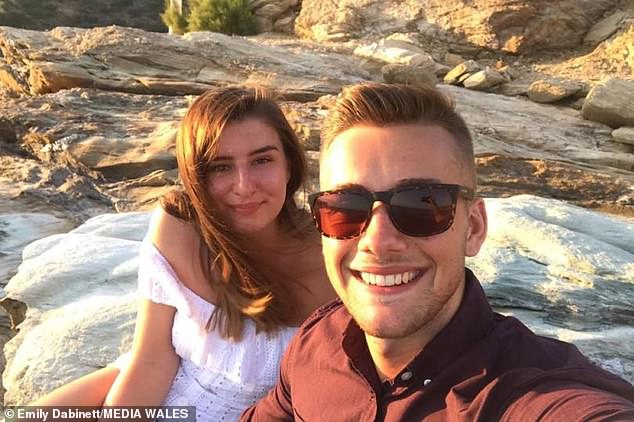 The brides said there has been ‘no communications, meetings or clarification’ from the travel company.

As a result, Miss Connor said that she has been left ‘frustrated’ and ‘in the dark’ about her future wedding.

She said: ‘We are worried now with where our money is going, obviously with Christmas and the cost of living crisis, it is a huge concern.

‘We have around 50 to 60 guests that have already booked on and other guests that want to book on. They’ve paid a big chunk of theirs as well and they’re asking me, what’s going on?

‘It’s so stressful. I’m currently doing my Masters and trying to run a nursery, all I can think about is what’s going on with my wedding? It’s four months away and I’ve had to have extensions on my assignment because it’s all been just crazy.

‘I just want some information, I want to know where I’m getting married. I feel in the dark with everything and it’s just frustrating.’

The frustrated bride said they are now considering cancelling the wedding. She added: ‘We initially booked the wedding abroad as we thought it would be easy and stress-free, it has been everything but.’ 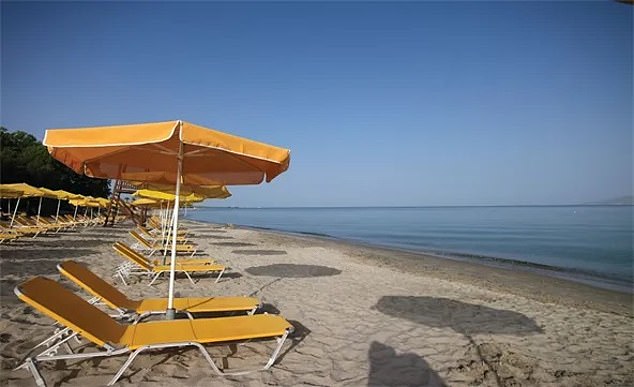 TUI said it is aware of the speculation around the weddings set to take place in the summer of 2023 and are prioritising their wedding bookings. Any weddings booked with a previous TUI venue will go ahead at a different location

Miss Dabinett is also looking for answers. She said: ‘At the moment, I’ve gone past the point of caring. A part of me just doesn’t want to get married anymore, I just want to know what’s happening and get my money back. It has put a downer on things. Another part of me thinks, I have waited for eight years for this and I want to do it now. It’s a sad situation.

‘I just want some answers and clarification. If they need to move hotels, that’s fine – we’d be okay with that. But the only issue is dates – we have a lot of guests that are teachers, so we are working around them. We are open to anything as long as we have that date. We just want to know because this has been going on for over a month and we just don’t know what is happening.’

TUI said it is aware of the speculation around the weddings set to take place in the summer of 2023 and are prioritising their wedding bookings.

Any weddings booked with a previous TUI venue will go ahead at a different location.

Following TUI’s recent announcement on the said changes however, Miss Connor has said that she is considering cancelling her wedding for fears a new location will mean additional costs for her and her guests.’

‘It’s correct that the hotel is currently off sale, however we can now confirm that we will be launching a new Holiday Village in Kos. We know how important weddings are to our customers and we want to reassure all those who have booked weddings through TUI to the Holiday Village Atlantica that both the holiday and wedding will go ahead on the dates booked in our new Holiday Village.

‘Our teams can assure customers they will have a fantastic Holiday Village experience with all the great Holiday Village facilities and entertainment we are famous for delivering.

‘Our customer services teams will be in touch directly with those who have bookings to discuss all options, prioritising our wedding bookings, who will be contacted within the next seven days.

‘We’d like to apologise for the delay in communicating this change to our customers whilst we were working through the finer details and legalities with our partner Atlantica.’