‘He’s my Bozzie Bear’: Boris Johnson, 54, and his lover Carrie, 30, are seen together for first time since his 25-year marriage ended as he makes his pitch for leadership of the country

With bashful smiles and their eyes locked, he looks besotted – and so does she.

Boris Johnson and Carrie Symonds were clearly smitten with each other as they strolled together while exchanging loving glances.

To close friends who have loyally helped keep the couple’s growing romance under wraps, their cosy body language will come as no surprise. But for everyone else, these pictures offer a tantalising glimpse into Westminster’s newest power couple.

For if the former foreign secretary’s ambitions for the top job ever come to fruition, it could be he and 30-year-old Miss Symonds moving in to Downing Street together. 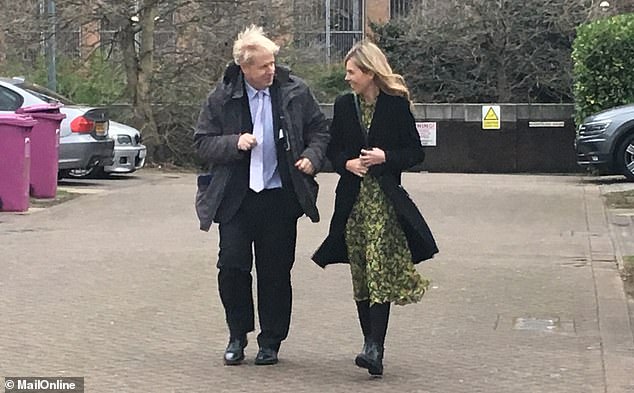 The couple have kept a low profile since Mr Johnson, 54, and his wife Marina announced they were divorcing last September. But behind the scenes, their relationship has apparently been going from strength to strength.

And the way she tucks herself into his arm in one of the photos shows she seeks his protection.

A friend of Mr Johnson said: ‘Boris is different around Carrie. He only has eyes for her. It’s very genuine. He wouldn’t have gone through all this if it wasn’t the real deal. He just seems like a better man around her. He’s determined not to do anything to mess it up.’

Amid Westminster speculation about whether Miss Symonds could become the third Mrs Johnson, it is unclear if the couple have actually moved in together. But certainly Mr Johnson – who owns a home in Oxfordshire – has been spotted in the mornings leaving the flat in South London which Miss Symonds bought last year for a little over £650,000, with a mortgage.

At New Year, they jointly hosted a discreet party there for close friends, at which they were reportedly ‘very much in love’. They also went on a New Year holiday to the Greek villa owned by Mr Johnson’s father Stanley, where last summer Boris holidayed with his children.

Indeed, so besotted is Mr Johnson with Miss Symonds – who is only four years older than his daughter Lara Lettice – that one source has told the Mail: ‘It wouldn’t surprise me at all if they ended up getting married once his divorce is all settled.’ 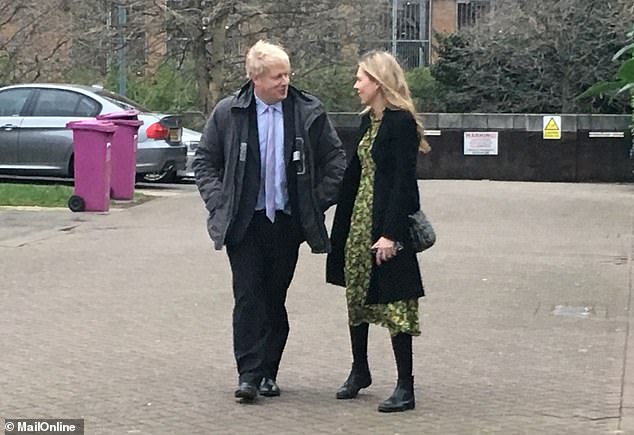 Miss Symonds is already being teased with the nickname FLOTUS, as in ‘First Lady of the United States’, the acronym used by White House staffers for the President’s wife. But to Mr Johnson, she is simply his adorable ‘Little Otter’, the pet name he apparently calls her by. She, in turn, affectionately calls him ‘Bozzie Bear’ – after Fozzie, the big, fluffy-haired Muppet, reportedly. Visible evidence of Miss Symonds’ influence on Mr Johnson’s political profile was on display yesterday when he delivered his Brexit speech in front of a JCB digger at the company’s Staffordshire factory.

Mr Johnson’s shirt collar looked two sizes too big, a result of him losing at least two stone after she persuaded him to go on a diet. They also gave up drinking. She has brought the skills that earned her a formidable reputation as Tory HQ director of communications – where her job included telling Conservative ministers how to improve their public image – to bear on Mr Johnson.

He struck a notably more sober tone in a half-hour televised interview with LBC radio’s Nick Ferrari this week. Gone were Classics scholar Mr Johnson’s smart-alec references to Ancient Greece or Rome. And there were none of the contrived harrumphings and stutterings to avoid difficult questions which make him look both buffoonish and evasive.

Miss Symonds has also wooed him to some of her fashionable environmental hobbies, like saving elephants. Departing from the usual standard Brexit fare in his newspaper and magazine columns, he has written recently: ‘When I see an African elephant, I feel rage that their population is now down to 300,000, and that we are losing these animals at a rate of eight per cent a year.’ 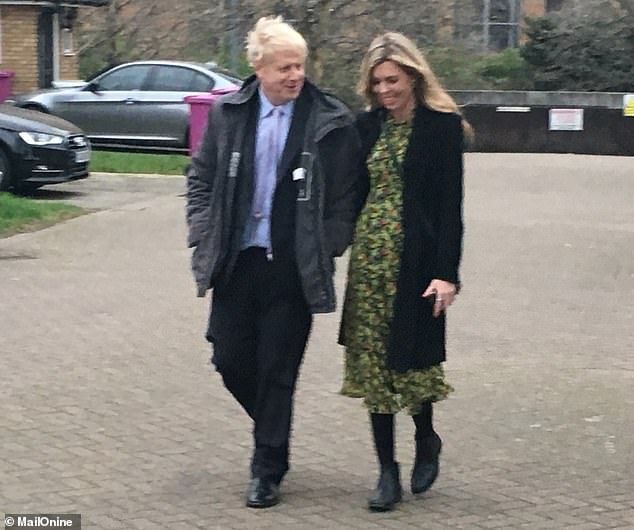 The way she tucks herself into his arm in one of the photos shows she seeks his protection, a body language expert said

Around the same time, Miss Symonds berated Kim Kardashian for posing for photographs sitting on an elephant in a bikini. She tweeted: ‘Captive elephants used for tourists to ride and pose for pictures with, are stabbed and punched to break their spirits and to beat them into submission. DO NOT ever ride an elephant.’

Mr Johnson’s renewed leadership manoeuvrings come after Tory nemesis Michael Gove revived his own prospects with a devastating attack on Jeremy Corbyn at the end of the debate on Labour’s motion of no confidence in the Government.

Mr Gove’s speech was greeted with thunderous cheers by Conservative MPs crying out for Cabinet star quality. Mr Johnson has never forgiven Mr Gove for stabbing him in the back in the 2016 Tory leadership contest, after they led the referendum campaign as brothers in arms.

Mr Johnson’s rampant ambition and Mr Gove’s emergence as Mrs May’s most loyal and vocal Cabinet defender could set the stage for a leadership rematch if, as seems increasingly possible, the PM is forced to stand down in the next year or so. 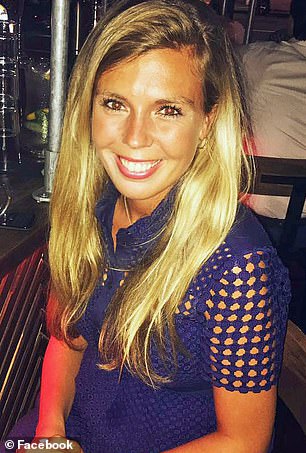 Miss Symonds is already being teased with the nickname FLOTUS, as in ‘First Lady of the United States’, the acronym used by White House staffers for the President’s wife

Like Mr Johnson, Mr Gove has battled to stay trim. He joked in his Commons speech about being on a diet. Mr Gove is hoping that by staying loyal to Mrs May he can expunge the stain of having knifed Mr Johnson in 2016. Mr Johnson will always be the Tory faithful’s dashing blond hero.

But so was Michael Heseltine who betrayed Margaret Thatcher and lost out when John Major timed his late run to perfection.

The renewed Johnson-Gove rivalry has extra spice given that Mr Johnson’s campaign would inevitably be led by Miss Symonds. She knows all about Mr Gove’s leadership tactics having been in his campaign team in 2016 when he destroyed Mr Johnson.

She also talked Environment Secretary Mr Gove into adopting the same ‘cuddly’ environmental issues Mr Johnson now espouses. Mr Gove also led the Cabinet revolt which stopped the release from jail of black cab rapist John Worboys. Miss Symonds has written about being one of the women he attacked.

Mr Johnson’s campaign has received a £20,000 interest-free loan from the political strategist Sir Lynton Crosby, who ran his two London mayoral campaigns. The money came from Mr Crosby’s CTF Partners suggesting he will run Mr Johnson’s leadership operation. Mr Crosby was also the architect of David Cameron’s election campaign in 2015 when the Tories won their first overall majority since 1992.

But he was also heavily involved in Theresa May’s disastrous 2017 election in which she surrendered a 20 per cent lead in the polls and came close to losing altogether.