Boris Johnson tonight admitted he does not remember a lunch when he is alleged to have groped the thigh of journalist Charlotte Edwards – but insisted he knows the claims are not true.

The Prime Minister conceded he had ‘no memory whatever’ of the meal two decades ago as he was grilled again over the accusations.

He said he did not want to ‘minimise’ the importance of such claims, but in this case he was confident they were wrong for ‘all sorts of reasons’.

Ms Edwardes claimed Mr Johnson groped her thigh under a table at a private dinner in 1999 when he was editor of the Spectator magazine.

Mr Johnson reportedly told his aides that the allegations were ‘f***ing untrue’ when he was first told about them after they were published in The Sunday Times. 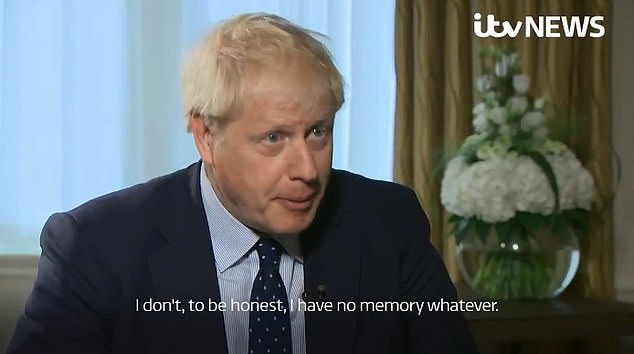 Speaking to ITV News at the Tory conference in Manchester this evening, Mr Johnson was asked twice if he had any recollection of the lunch

Speaking to ITV News at the Tory conference in Manchester this evening, Mr Johnson was asked twice if he had any recollection of the lunch.

‘I don’t, to be honest, I have no memory whatever,’ he said eventually.

It was the second time in a day that Mr Johnson had been confronted over the allegations in broadcast interviews.

Challenged this morning, Mr Johnson said: ‘Quite a few people don’t want Brexit to be done and I think rightly or wrongly they conceive of me as the person who is helping to deliver Brexit and it is inevitable that I am going to come under a certain amount of shot and shell. I don’t mind that in the least.’

Asked if he was taking the allegations seriously, he told the BBC: ‘I have said what I have said about that. They are not true. It is obviously very sad that someone should make such allegations.

‘They are not true and I think really by comparison with what we are doing which is taking forward a very dynamic domestic agenda, I have said what I have to say about this.’

Mr Johnson later told LBC he believed such allegations were being made now because he had been ‘tasked one way or the other to get Brexit done by October 31′.

‘And there are quite a lot of well-meaning and highly intelligent people who basically think that that would be something they don’t want to see, and I think that there is a concerted effort now to frustrate Brexit,’ he said.

Mr Johnson repeatedly tried to talk about the government’s domestic policy announcements which have been made during the Conservative Party’s annual conference in Manchester over the last 48 hours.

But he struggled to move away from questions about his private life as he conducted a series of broadcast interviews this morning.

Asked again about the allegations made by Ms Edwardes, Mr Johnson told the BBC’s Radio 4 Today programme: ‘Let me be clear. I don’t in any way want to minimise the importance of such allegations if they were true, if you see what I mean.

‘Is that clear to you? I am not minimising the significance of this as an issue.’

Mr Johnson insisted he believed voters do trust him despite the attacks on his character.

‘I said we would have a big period of investment in the NHS, we are now going through the biggest upgrades of hospitals, the biggest hospital building programme in a generation.’

He added: ‘I don’t want to in any way minimise the importance of the kind of stuff you are talking about.

‘Yes, I get it. Yes, of course, this kind of thing, if true, would be very important. As it happens it is not true.’

Mr Johnson also faced a grilling today over his relationship with American businesswoman Jennifer Arcuri who received thousands of pounds of taxpayers’ money.

Talking about his time as Mayor of London, he told LBC: ‘I was extremely proud of what we did in London and in so far as the administration of trips and grants and whatever, I can tell you there was absolutely no impropriety as far as I was concerned.’

Mr Johnson’s comments on the allegations made by Ms Edwardes came after the wife of top Downing Street aide Dominic Cummings denied rumours she was the second woman whose thigh was allegedly squeezed by Mr Johnson in 1999.

Mary Wakefield – a journalist at the Spectator magazine and an employee of Mr Johnson’s during his time as editor when the alleged incident is said to have occurred – issued a statement insisting ‘nothing like this ever happened to me’.

She called Mr Johnson ‘a good boss’ and added his accuser, Ms Edwardes, had never mentioned the incident to her.

In her first column for the Sunday Times’ Style magazine, Ms Edwardes said that after the lunch had taken place she had confided in the young woman who was sitting on the other side of Mr Johnson, who told her: ‘Oh God, he did exactly the same to me.’ 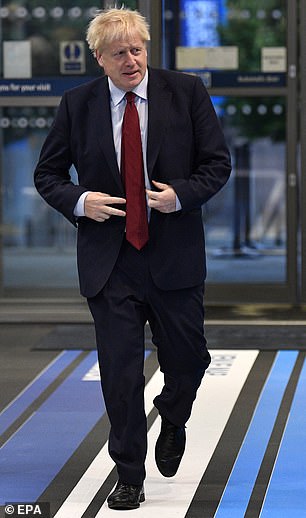 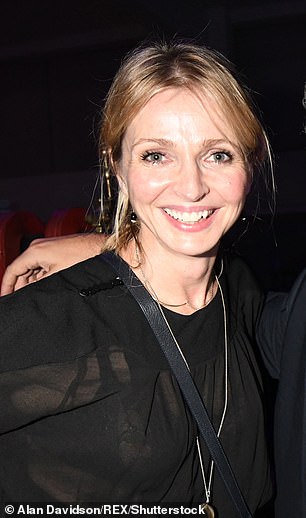 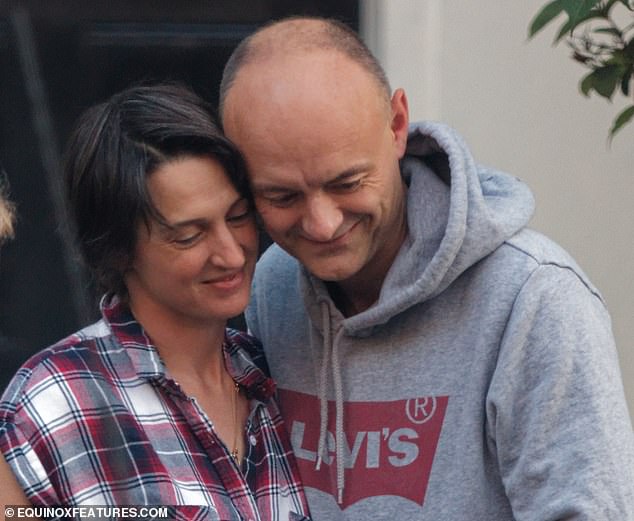 At the Party conference in Manchester rumours had been swirling that Mrs Wakefield was the other party.

Yesterday afternoon the BBC’s Laura Kuenssberg tweeted: ‘Statement from Mary Wakefield, who happens to be Dominic Cummings’ wife-‘I am not the woman referred to in Charlotte Edwardes’s column.

‘Boris was a good boss and nothing like this ever happened to me. Nor has Charlotte, who I like and admire, ever discussed the incident with me.’

A Downing Street spokesman said that the accusations made against Mr Johnson were ‘untrue’.

Downing Street’s rebuttal prompted Ms Edwardes – the partner of ITV’s Robert Peston – to respond on Twitter: ‘If the prime minister doesn’t recollect the incident then clearly I have a better memory than he does.’