Madrid: As the daughter of the Russian female double agent who inspired Ian Fleming’s first and most glamorous Bond Girl, Liana Romero knows about the subtleties of espionage.

But the 88-year-old’s view that female spies should seduce, and that misogyny, not sensitivity, is the real characteristic of Bond, may leave some both shaken and stirred. 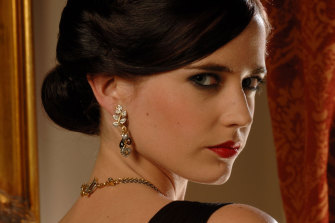 Vesper Lynd (played by Eva Green in the 2006 version of Casino Royale.

“Seduction is the most powerful weapon a woman spy has,” said Ms Romero, daughter of Larissa Swirsky, a Russian-born double agent on whom Ian Fleming based Vesper Lynd.

Her comments come after the director of the new Bond film called Connery’s 007 “basically a rapist” for his forceful approach to women that “wouldn’t fly today”.

“James Bond is a sexy, powerful man, not someone who respects women so much he won’t touch them,” said Ms Romero. “No one played Bond like Sean Connery – a real man. That’s the Bond Ian Fleming created, and we shouldn’t try to make a 21st-century version.”

Ms Romero, who met Connery more than 40 years ago on the set in Cuba, said her mother used her powers of persuasion on British agents, including Fleming, when she decided to become a double agent and inform her UK handlers of her past as a Nazi spy. 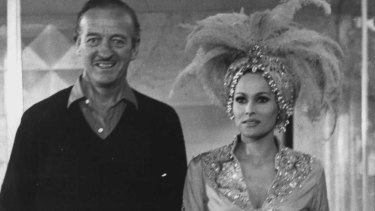 British actor David Niven, one of the spies in the original Casino Royale and Ursula Andress, who played the original Vesper Lynd.Credit:UPI

“She crossed her legs, adjusting the hem to reveal them to best advantage, lit a cigarette, inhaling and breathing out smoke in the approved furtive, reticent fashion and said, in cosmopolitan English, ‘I am the Queen of Hearts’.”

Queen of Hearts is the name of a documentary about her which is in post-production after being filmed this summer in Spain by The Flow Studio.

“It’s a tale of a brave and feisty woman who played a role in WWII that has not been recognised by history,” said producer Marta Alamillo.

Born into an aristocratic Russian family in Odessa in 1910, Swirsky’s early life was a whirl of extraordinary experiences after she fled the 1917 Russian Revolution in which most of her relatives were killed.

According to Ms Romero, she acted in silent movies in Berlin and partied with the likes of Coco Chanel and Salvador Dali in Paris before meeting her husband, Spanish naval officer Manuel Romero Hume, on holiday in Cannes.

SOME OF THE BOND GIRLS

“He met her at teatime and before midnight he had proposed. She had a magnetism that no one could resist.”

When WWII broke out, Swirsky and Romero Hume were living in Ceuta, one of Spain’s North African territories. The Franco government was an ally of Germany and Italy, and Swirsky was persuaded by a friend to lend her talents as a speaker of six languages to the Axis cause, becoming a Nazi spy.

With her husband posted as harbour master on the Bay of Gibraltar, Swirsky entered a nest of spies, secret operations and saboteurs.

“Her job was to check on targets in the bay or enter Gibraltar and report on the damage done by German bombers,” said Wayne Jamison, an author who has written on WWII and the presence of Nazis in southern Spain.

Ms Romero recalls how, as a girl of 10 or 11 she accompanied her mother, part of Swirsky’s cover as a well-to-do lady of leisure on missions that could have led to her death at the gallows if exposed.

“She was absolutely cold, and had an actress’s perfect control of her facial and bodily expressions,” said Ms Romero, remembering how her mother tossed her miniature camera onto a tall filing shelf while being strip-searched in a Gibraltar military base.

Ms Romero also recalls her mother’s tears when her sister, visiting from France, said she had joined the Resistance and brought the first news of the Holocaust. “She didn’t know how bad the Nazis were. They had promised she would regain all the family property from the USSR, and be able to care for her father’s grave,” Ms Romero said.

After Swirsky switched sides, she provided information to British agents, such as how Italian frogmen used manned torpedoes at night to attack ships.

“Fleming would come to our house for tea, and the Germans and Italians came for beer in the evenings. He was bowled over by my mother and based Vesper Lynd in Casino Royale on her,” Ms Romero said.

The latest Bond movie, No Time To Die, features the final performance by Daniel Craig and is directed by Cary Joji Fukunaga. It has its world premiere on Tuesday in London.