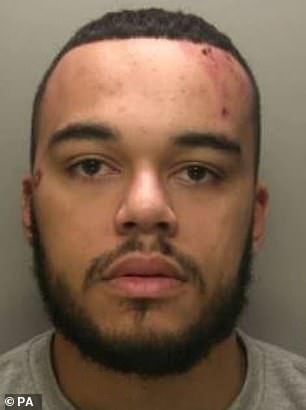 Jay Fenton, 22, pictured, has been sentenced to three years and eight months in prison

A man has been sentenced to three years and eight months in prison after a high speed chase through a town led police to find Class A drugs.

Jay Fenton, 22, of Nesham House, Hackney, was arrested after the pursuit on Sunday 9 December in Dorking, Surrey.

His silver BMW caught an officer’s attention after it showed up on automatic number plate recognition as previously failing to stop for police.

In dash cam footage from a police car Fenton can be seen indicating right at a crossroads and jumping the lights, as officers calmly follow for several minutes.

As Fenton races across the town he overtakes other vehicles at 70mph in a 30mph zone and dangerously drives on the wrong side of the road.

While on the wrong side Fenton bursts his rear tyre but continues to overtake other drivers before crashing into multiple parked cars.

A police officer then bursts out of the car and is seen on dash cam footage racing to arrest Fenton.

PC Ed Stock, of the Roads Policing Unit, said: ‘I was following the BMW for a number of miles, while it was overtaking members of the public and driving at 70 miles per hour in 30 mph zones, continuing to overtake vehicles throughout.

‘My main focus was to ensure that no one was injured as a result of the driver’s lack of care for anyone but himself.

‘Even with a burst tyre, Fenton continued to overtake and undertake members of the public with only three working tyres before crashing into multiple parked vehicles and coming to a stop after crashing into a parked car. 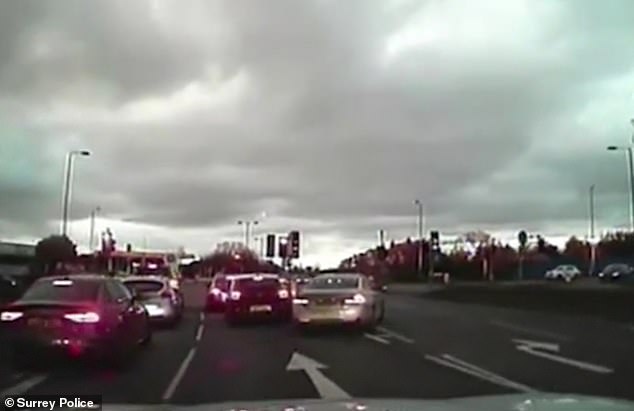 The BMW is spotted by police and jumps the lights in Dorking, Surrey, before being followed 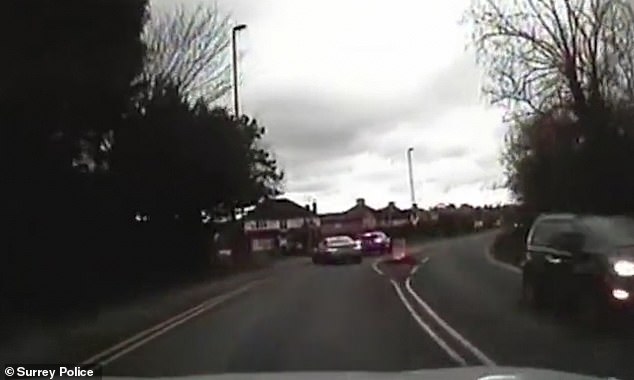 The car hits the crossing, blowing a tyre, while coming coming back into the correct lane

‘I almost lost sight of him at one moment because there was not enough space for me to get through traffic, it is so important for drivers to ensure that they let emergency services through when blue lights are displayed.’

When officers arrested Fenton for dangerous driving, they found approximately £3,700 in his underwear, Fenton then told them there were two lock knives in the glove box.

Officers carried out a search of the vehicle and found the knives, and a Police Dog indicated there could be something in the holdall.

The Operation Viking team investigated and a search of the holdall and Fenton’s property, found a large amount of Class A drugs.

Fenton was further arrested on suspicion of possessing an offensive weapon, and being concerned in the supply of Class A drugs. 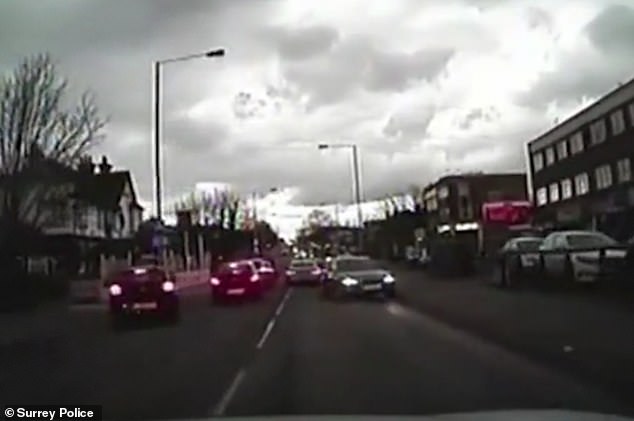 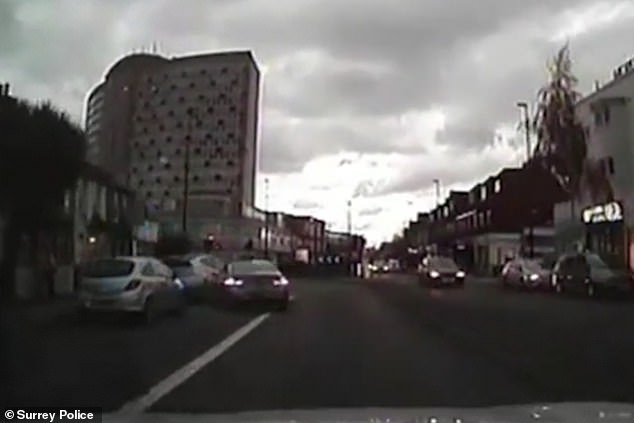 Fenton was sentenced at Guildford Crown Court, after he pleaded guilty to possession with intent to supply crack cocaine and heroin, dangerous driving, possession of criminal property and two counts of possession of a bladed article.

Officers are proactively deterring criminals travelling from outside the county under Operation Viking, which has been in operation since late 2016 to disrupt cross county border drug dealing and associated violence across east Surrey.

So far the team have secured more than 200 years’ custodial sentences for all convictions under this initiative.

If you have information about suspected drug dealing or crime in your area, contact Surrey Police by calling 101, always 999 in an emergency.

If you don’t want to speak to police, you can anonymously call the independent charity Crimestoppers on 0800 555 111.