Blind woman, 46, reveals people shout abuse for getting too close while out shopping with her guide dog and one customer even shoved her away in Marks & Spencer

A blind woman has spoken out as she reveals people shout abuse at her for accidentally getting too close to them when she’s out shopping with her guide dog.

Linda Johnson, 46, from Margate, Kent, says in one distressing incident she was pushed by a shopper in Marks and Spencer for not social distancing.

‘Don’t they realise I can’t see how close I am to people?’ she said today.

Ms Johnson says she has even been accused of having her guide dog, Iggy, under false pretences.

‘People think you have to be completely and utterly blind to have a guide dog.

‘I have severely limited vision and I wear glasses, but people have no idea about visual impairment and they think this means I can see.

‘They think you’re either blind or you’re not. But there’s a spectrum of sight.’ 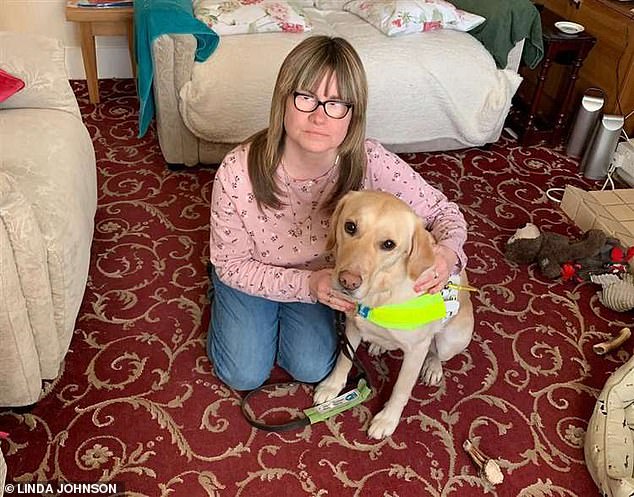 Linda Johnson, pictured with guide dog Iggy, says she has dealt with abuse as people do not understand the difficulties those who are blind or visually impaired face during the pandemic

When she first started hearing about guide dog owners getting shouted at she didn’t think it would happen to her.

‘I couldn’t believe that some people were being so awful, but then after the first lockdown it started happening.

‘There is so much aggression out there aimed at guide dog owners, it’s beyond me.

‘We have a guide dog for independence and freedom yet this is being taken away from us.

‘We can’t shop confidently, we can’t go into shops because of abuse from the public.

‘It’s creating a lot of fear and anxiety, and it will probably stop me going out to the shops.

‘I have to really psych myself up to go out these days to buy essentials.

‘Shopping is now frightening and it shouldn’t be.’

She now avoids Sainsbury’s and Tesco Extra in Westwood, Margate, but praised Marks and Spencer for ‘going above and beyond’ to help her keep safe.

Last week Linda, who was made redundant from her job at Saga when the pandemic hit in March, was sworn at and called ‘ignorant’ when Iggy led her to the door of Lloyd’s Bank in Margate, instead of to the end of the queue outside.

‘Someone said ‘there’s a queue over there, you’ll need to join it’ and I was told to go along a pathway.

‘I can’t see if there is a queue and guide dogs are trained to take you to the entrance or the door.

‘A queue to Iggy is nothing, it’s an obstacle – she’ll take me past it.

‘That’s when the abuse and the aggression starts. When you have limited or no sight, ‘over there’ means nothing. 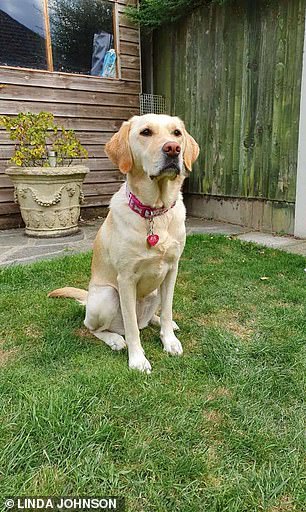 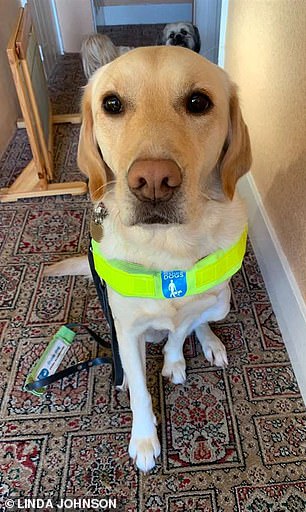 Linda says her guide dog Iggy, pictured, is trained to take her to a shop’s front door so will not take her to the back of a queue outside the shop instead seeing it as an obstacle to go round

‘I explained that guide dogs were not taught to queue which was why I’d gone to the door and then people started having a go at me.

‘Someone was moaning about how inconsiderate I am and I was called ignorant.

‘Two members of staff had to come out to calm things down.

‘I felt so anxious and uncomfortable so I just left.

‘On another occasion I was in Marks and someone pushed me out of the way because I wasn’t social distancing.

‘I can’t see how close I am to people. It’s really upsetting when people react this way.’

The Royal National Institute of Blind People says there have been many cases of blind people being confronted.

The RNIB is calling on the government to issue guidance to service providers and communicate to the public to be more aware of people with sight loss.

The charity’s director of services David Clarke says social distancing is near-impossible for many blind and partially sighted people.

‘This makes it difficult to go out and get food, exercise or attend medical appointments, while isolation is impacting people psychologically as well as practically, adding to stress.

‘Keeping two metres away from other people is really challenging when you have blank patches in your vision or you can’t see how far away other people are.

‘Some people with sight loss have been confronted by passers-by as they have been unable to keep their distance, while others are so nervous about breaking the rules they’ve lost confidence and are unwilling to leave the house.’