British far-right commentator Katie Hopkins has arrived in London after being deported from Australia for flouting quarantine rules.

Hopkins, who had travelled to Australia earlier this month for an upcoming series of Channel Seven’s Big Brother, landed at Heathrow on Tuesday afternoon Australian time. 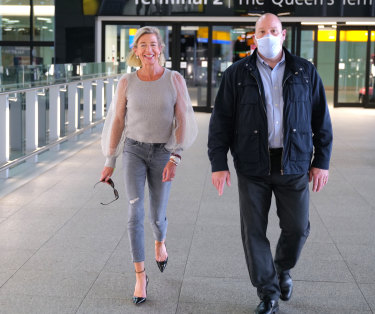 She reportedly declared “it’s nice not to wear a mask” before climbing into a Mercedes and leaving the airport.

Heathrow Airport makes clear on its website that “as we continue to welcome passengers from around the world, wearing a face covering will still be required whilst in our terminals”.

Hopkins was escorted to Sydney International Airport on Monday afternoon after Home Affairs Minister Karen Andrews had earlier said she would be kicked out of the country as soon as possible.

Hopkins told her 261,000 Instagram followers on Saturday that she had opened her door to guards naked and refused to wear a mask to “call out” Australia’s quarantine system and COVID-19 lockdowns.

The provocative post came as 12 million Australians were locked down in NSW and Victoria, and tens of thousands of Australians were stranded overseas, unable to get a flight home since flight numbers were cut in half earlier this month.

The NSW government committed to provide quarantine for Big Brother contestants above the quarantine cap.

Federal government sources who were not authorised to speak on the record say the visas and exemptions to enter Australia during the pandemic for all Big Brother contestants, including Hopkins, were granted by Australian Border Force based on support from the NSW government.

All the contestants had employer-sponsored business visas sponsored by either Seven or the production company Endemol Shine Australia.

NSW Health Minister Brad Hazzard said on Monday that public servants in the state operations centre assessed applications based on “trying to make sure that our economy is looked after at the same time as we look to keep us safe”.

The public servants made recommendations that were then approved by either Mr Hazzard or someone in his office and Mr Hazzard said if there were no objection from the state operations centre, it would “generally get approval if it is a big positive for our economy and jobs”.

However, Mr Hazzard said he was shocked by Hopkins’ “juvenile, imbecilic behaviour”.

“To think that she could put our teams in our health quarantine, our staff, we have police, we have health staff, to think that she thinks it is acceptable to put them at risk and to put our broader community at risk is completely abhorrent,” he said.