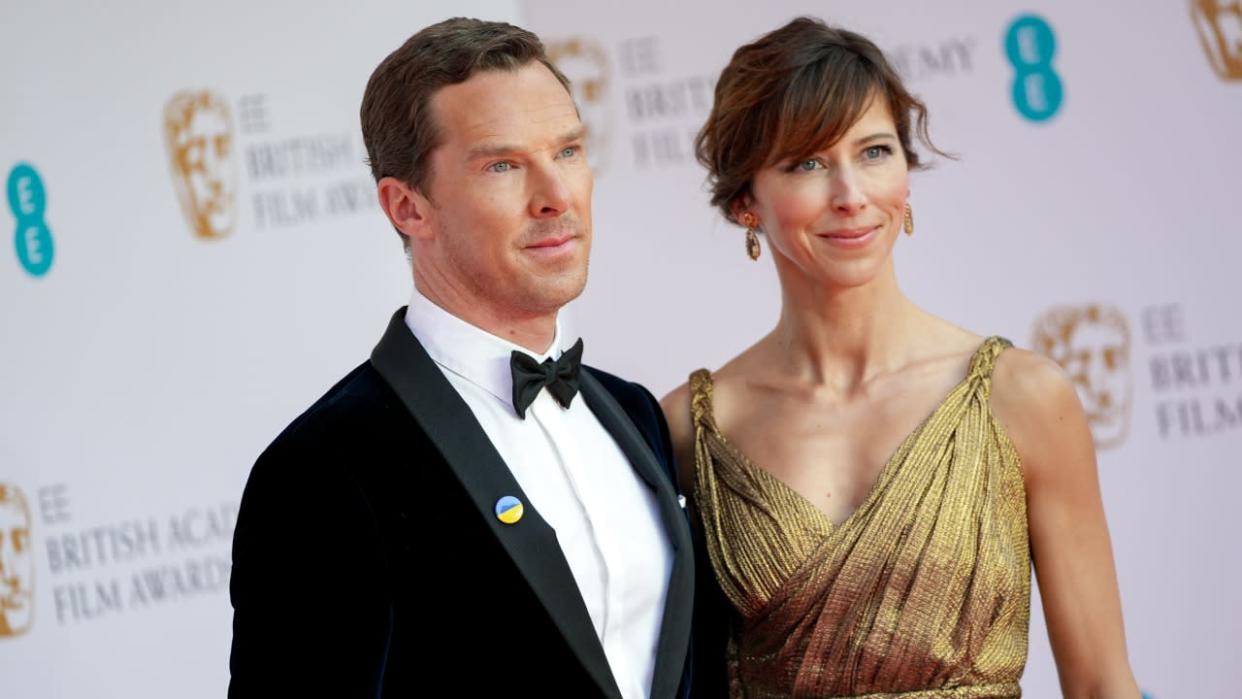 While the actual BAFTA film awards ceremony on Sunday may have been largely apolitical, the red carpet leading up to it was awash with political commentary.

“The Power of the Dog” star and BAFTA best actor nominee Benedict Cumberbatch, who attended the event with his wife Sophie Hunter, wore a badge depicting the Ukrainian flag.

Cumberbatch said the awards are “a celebration of an industry that’s about imagery, and images speaking as loud as if not louder sometimes than words. So it’s a small gesture,” the actor told BBC News.

The U.K. government has launched a local sponsorship scheme for Ukraine, which will match British people, charities, businesses and community groups to Ukrainians who do not have established families in the country, so they are able to come to the U.K.

Cumberbatch’s fellow best actor nominee Stephen Graham wore a blue and yellow bow and said: “I want to show my support and solidarity for what we’re going to go through.”

“Venom: Let There Be Carnage” director Andy Serkis, who presented the best director award, told PA News on the red carpet: “It’s a difficult situation having a celebration like this when such horrendous, horrific things are happening not too far away from here. But I think it’s also important that arts are celebrated because arts do hold humanity together, and actually freedom of speech and the power of storytelling is something that I think Ukrainians would totally applaud.”

“So if we hold them up tonight and reflect the enjoyment and the passion back to them, I don’t think it’s a bad thing,” Serkis added. “It’s really important to remember what is going on in the context of having an event like this, but as I say, what it stands for is so positive, because it’s about inclusion, because actually BAFTA have really, really moved, in the last few years, towards inclusion.”

Other stars who displayed solidarity with Ukraine at the awards included “The Girl Before” actor Jessica Plummer who wore a blue and yellow ribbon and “Made in Chelsea” actor Millie Mackintosh who sported a ribbon in Ukrainian colors.

Cumberbatch has been repeatedly vocal about the invasion. “It’s more now for all of us to do than just have thoughts and prayers,” Cumberbatch had said, as he was honored with a Hollywood Walk of Fame star in February, days after Russia attacked. “We need to act…we need to see what we can do as citizens of the world.”

On March 9, the “Doctor Strange” star held up a Ukrainian flag at the Santa Barbara International Film Festival and shouted out: “Stand united with Ukraine.”