Only weeks after the world watched China scramble to respond to the outbreak of coronavirus in Wuhan, Beijing is seeking to use the crisis to its advantage in a global propaganda push.

The government of President Xi Jinping is promoting an image of itself as a saviour to nations hit hard by the virus. 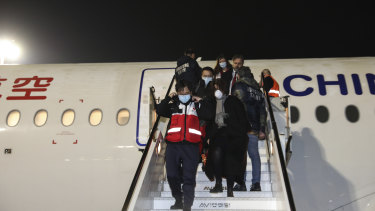 A Chinese aid team arrives at Fiumicino Airport in Rome, carrying members of a medical team and several tons of medical supplies.Credit:AP

In a twist, it is also promoting baseless conspiracy theories aimed at the United States.

A Chinese state spokesman, for example, tweeted a story from a Canadian-based disinformation site that claims COVID-19 originated in the US. That same website previously claimed flight MH17 was not shot down by a Russian missile over Ukraine.

The Chinese account also tweeted video of a US congressional testimony edited and framed to suggest COVID-19 didn’t originate in Wuhan, but in the US instead.

“China in particular is using the coronavirus crisis to its advantage in the information domain,” Jessica Brandt of the US-based Alliance for Securing Democracy told The Age and The Sydney Morning Herald.

“Prominent Chinese diplomatic officials and news outlets” are now promoting the outright conspiracy theory that the US military brought the coronavirus to Wuhan.

“That's a tactic we've come to expect from Moscow,” Brandt said. “It's new territory for Beijing.”

The use of such disinformation underscores how the coronavirus crisis has become a highly politicised test of government legitimacy, even as world leaders scramble to respond to the pandemic that is killing thousands and threatening the global economy.

China initially sought to cover up the outbreak and punished doctors who came forward with news of the virus.

Now, with more cases being recorded outside of China than within, Beijing is using propaganda in an attempt to recast itself as global leader in a time of crisis.

If the public forgets that the initial containment of the virus was botched by the Chinese Communist Party’s need to social control, so much the better, the thinking goes.

Monash University senior research fellow in Chinese studies Kevin Carrico said: “There is an attempt to obscure the origins of the disease through conspiracy theories, as well as an attempt to celebrate the Chinese Communist Party’s handling of the virus versus that of other nations.”

This is intended to hide the fact that the CCP “handled this absolutely horribly, and that the entire world is paying a price for that”, said Carrico.

“The China model didn’t solve this virus dilemma, it created it, and of course the CCP wants to hide that.”

Other propaganda themes pushed by China's state media include the notion that: "Western values [and or] democracy is an insufficient system to battle coronavirus" and the "US politicisation of the virus [is] a means to gain leverage in the trade war," according to an analysis by Foreign Policy Research Institute.

The material promoted by China also questions “the assistance the US has offered in the wake of the virus’ spread and suggest the US has withheld funding and other assistance," the report stated.

The Communist Party understands that by the time the crisis is over, the world's order could be permanently altered. For that reason, Beijing is trying to break the link in people’s minds between China and the origins of the global pandemic.

So Beijing, state media and Chinese embassies celebrate images of China doling out aid to hard-hit countries, with images of a plane full of masks and test kits for Italy.

Billionaire Jack Ma posted an image of coronavirus aid being sent to the US, Africa.

Overnight, Trump, drawing on wartime powers, ordered the production of needed medical supplies in the US. Beijing even has views on that: suggesting the global medical supply chains should not be moved from China.

For all the high-profile symbolism around China’s aid, one could forget that only last month China refused US help on the outbreak.

The flow of propaganda around coronavirus also highlights China and Russia’s strategic closeness.

Not only is China using methods associated with Russia: the two nations are holding back public criticism of each other in state media.

"Official Chinese sources are giving Russia political and policy space they do not afford to other countries,” according to a separate analysis by the ASD.

"Both China and Russia are using the epidemic as an opportunity to paint Western countries — particularly the United States — as racist and hypocritical."

China and Russia are both partners to the Shanghai Cooperation Organisation, a grouping of authoritarian nations in opposition to Western power.

Trump’s insistent description of COVID-19 as “the Chinese Virus” could inflame anti-Asian sentiment and serves as a reminder that two wrongs don’t make a right.

The popular but baseless claim in the US that the coronavirus is in fact a botched bioweapon confuses matters more.

By design, the value of truth remains a core ingredient for any vital democracy.

In a better world, everyone would abstain from blaming each other for coronavirus. China wouldn’t use the moment to spread disinformation to blame the West and Trump wouldn’t name call.

But we don’t live in that world. And political communication is a free-for-all.

So China spews propaganda and Trump replies in kind, reminding the world, in case we forget, in which country the pandemic actually began.