‘They are just meat to Putin… and we are the meat grinder’: Ukrainian soldier says ‘conveyor belt’ of Russian troops are being cut down as Battle of Bakhmut descends into ‘First World war hell’

The battle for Bakhmut has descended into a hell-scape reminiscent of the First World War as Putin throws troops into a fight described as ‘a meat grinder’.

Russia is pounding Ukrainian trenches in the city – once home to 70,000 but now little more than a ruin – day and night with artillery before troops charge into front-on attacks against machine-gun nests.

The no-mans land between the frontlines is now littered with shell holes, the skeletons of trees shredded by shell-fire, and the bodies of dead soldiers in eerie echoes of Passchendaele, Ypres or the Somme more than 100 years ago.

‘They are just meat to Putin,’ a commander named Kostyantyn told the FT on a visit to the front, ‘and Bakhmut is a meat grinder. For what? A f***ing metre of our land.’ 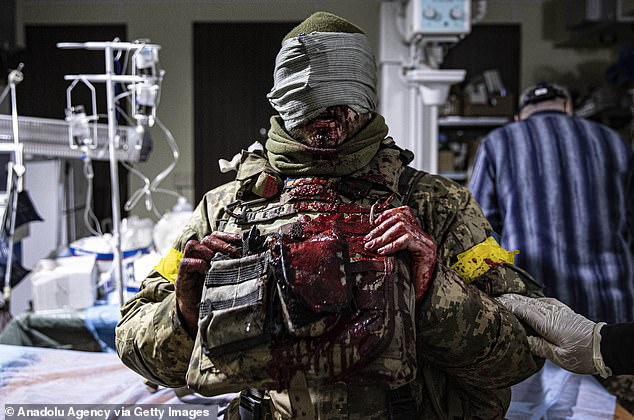 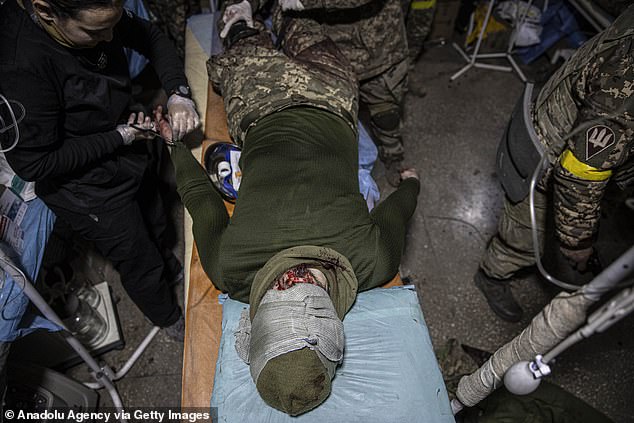 The soldier is treated by medics, with reports suggesting that both Ukraine and Russia are suffering heavy losses around the city

This is a battle that has been raging since May, begun when Russian forces were on the march across Donbas under orders from Putin to ‘liberate’ the whole of the region – which Moscow claims as its own.

The city sits on an important confluence of supply routes and, when fighting started at least, was seen as a vital staging point for assaults further into Donbas – particularly the nearby cities of Slovyansk and Kramatorsk.

Now, though, the battle is more symbolic than practical. Most analysts agree the blood price that Russia has paid trying to take Bakhmut – thought to be more than 100 troops per day – is not worth the value of capturing it.

But Putin promised the Russian people that Donbas would be liberated. And the path to that goal – however fantastical – lies through Bakhmut. So the show must go on.

Leading the charge, for the last several months at least, are thought to be Yevgeny Prigozhin’s feared Wagner Group mercenaries.

Having triumphed in the battle for Mariupol earlier in the war alongside Ramzan Kadyrov’s Chechen mercenaries, Prigozhin appears to have taken on the mission to Bakhmutas a way to raise his personal standing with Putin.

That effort, at least, appears to have been successful: Russia has officially acknowledged the existence of Wagner and allowed its leader to set up office in a swanky new skyscraper. 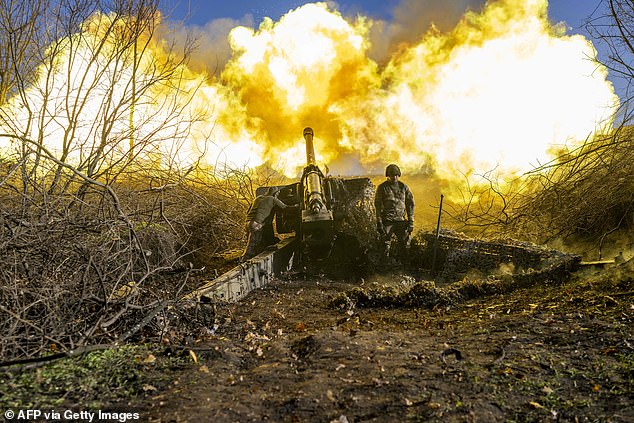 A Ukrainian artillery gun opens fire on Russian lines near the city of Bakhmut, where the fighting has been described as ‘hell’ and the heaviest of the war to date 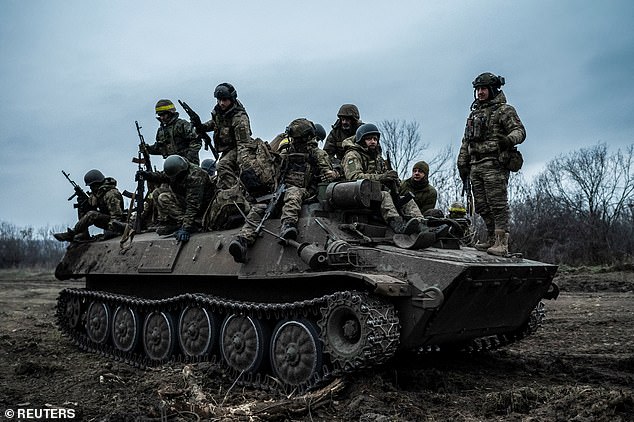 Soldiers from Ukraine’s Carpathian Sich Battalion, made up of volunteers from Kyiv, are pictured deploying to Bakhmut as the city sees intense fighting 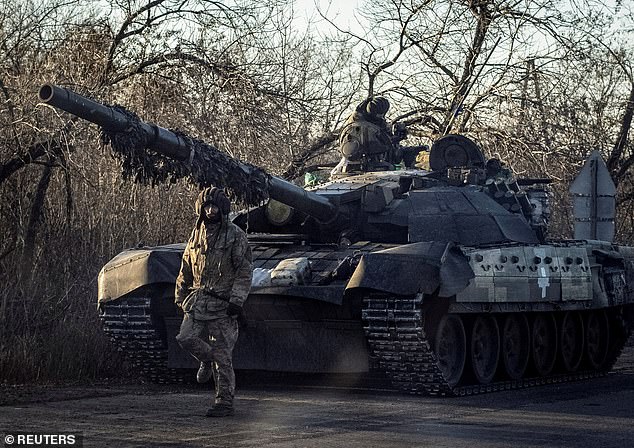 A Ukrainian tank crew repairs their vehicle and prepares for combat near the frontline in Bakhmut, in the eastern Donbas region

But the effort has cost Wagner dearly. Prigozhin has been forced to resort to recruiting murderers and rapists from jails to pour into the fight.

Now, with the retreat of Russia’s regular army from Kherson in the south, he appears to have reinforcements as many units charged with defending that city have been re-tasked to the Donbas front.

Ukraine has likewise sent units who had fought in the battle for Kherson to defend positions around Bakhmut, which has massively escalated the battle.

Troops now stationed there, some of whom will have witnessed Russia’s massive artillery bombardments the devastated the likes of Mariupol and Lysychansk earlier in the war, as the most-intense they have witnessed to date.

Christopher Miller, who visited the city he once called home for the FT, said there was rarely five seconds between each shell burst and the sky was hazy with smoke.

While neither side is willing to publicly admit the human toll of the battle, Miller said ‘both are clearly suffering heavy losses’.

Despite the heavy fighting, Russian gains have been minimal. 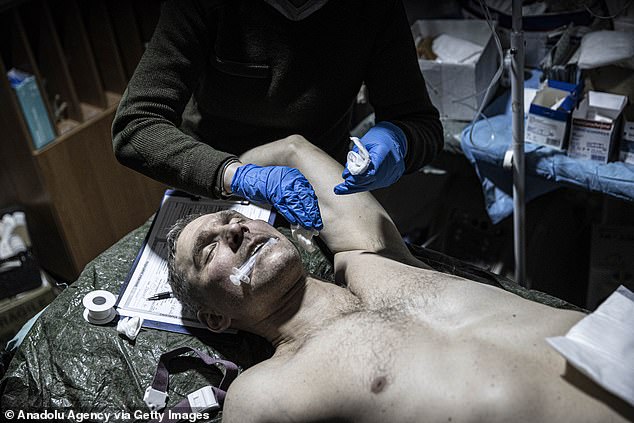 A Ukrainian soldier, wounded in conflicts within Russian-Ukrainian war, receives a treatment at Bakhmut Hospital

The frontline has changed by no more than a few meters in recent weeks and Ukraine says the impending winter is likely to slow them further.

Temperatures in Ukraine are already routinely below freezing, meaning the ground is hard and difficult to dig into.

It means that advancing Russian troops cannot dig themselves defensive positions and are left badly exposed to artillery with most natural and man-made cover already blown to bits.

Lidiya Vasylenko, a Ukrainian military press officer, said even if Putin’s forces do manage to take ground, they are usually forced to retreat soon after.

Both Vasylenko and machine-gunner Kostyantyn don’t expect the city to change hands during the coming months, which means the hell troops are being subjected to shows no sign of ending any time soon.