After the boom, now the property market cools off: Average house prices plunge by £10,000 between June and July and fewer house sales as full stamp duty holiday ends

House prices across the UK plunged by nearly £10,000 between June and July as the full stamp duty holiday ended, but prices still remain higher than before the Covid-19 pandemic.

Although the year-on-year average prices are still soaring, with this July’s prices standing at around £19,000 higher than the year before, the current slump comes alongside the end to the Covid-19 stamp duty holiday.

Experts said the comedown in house price growth follows an ‘artificial boom’ caused by the tax break, with agents predicting that demand for properties will dramatically fall as it comes to an end.

The Government’s stamp duty holiday, introduced when the pandemic hit last year, fuelled a rapid rise in house prices, but the stamp duty band was halved from £500,000 to £250,000 from July, and will revert to £125,000 from September 30. A similar tax holiday in Wales ended on June 30.

A chief economist said the year-on-year increase in house prices will make homeownership more difficult for first-time buyers to get on the property ladder.

House prices are also still around 13 per cent higher than at the start of the Covid-19 pandemic, Robert Gardner, Nationwide’s chief economist, said. 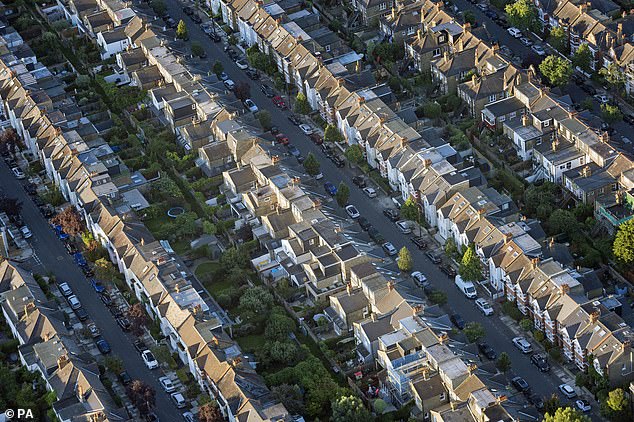 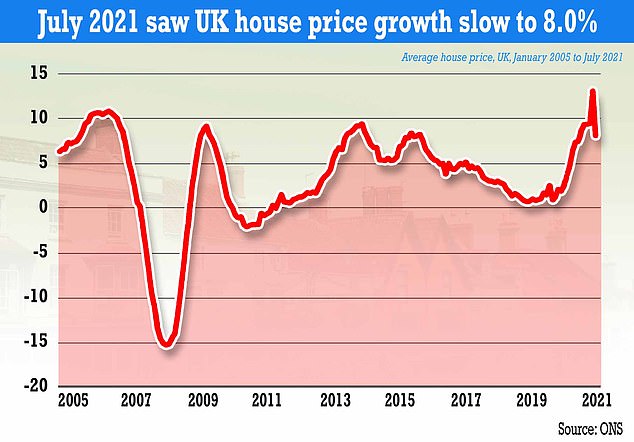 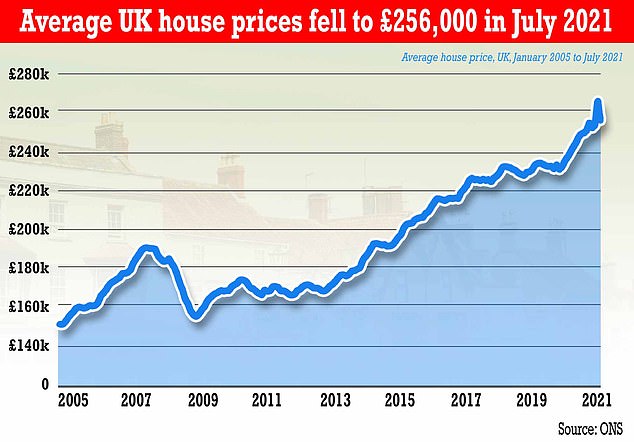 Looking at July’s slump, the ONS report said: ‘As the tax breaks were originally due to conclude at the end of March 2021, it is likely that March’s average house prices were slightly inflated as buyers rushed to ensure their house purchases were scheduled to complete ahead of this deadline.

‘This effect was then further exaggerated in June 2021, in line with the extension to the holiday on taxes paid on property purchases in England, Wales and Northern Ireland.’

Annual house price growth saw a 13.1 per cent increase in June, which slowed to just eight per cent the following month, the ONS figures showed.

In further signs of a slowdown, the Bank of England previously reported 75,200 home buyer mortgages were approved in July, down from 80,300 in June.

‘Investors, homeowners, solicitors and banks pushed hard to get transactions done in time for buyers to capitalise on lower transaction costs. This was followed by a slowdown in pace.’

Separate figures released by the ONS on Wednesday showed inflation jumped from two per cent in July to 3.2 per cent in August – the highest since March 2012. 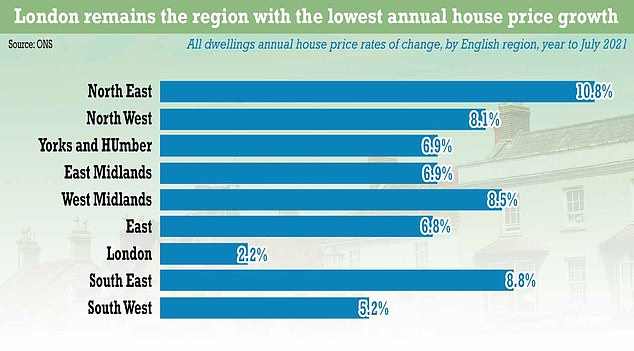 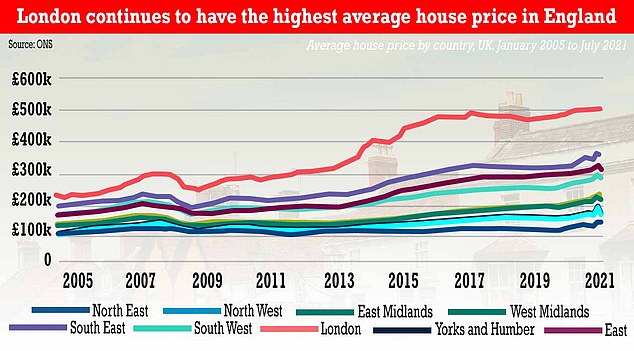 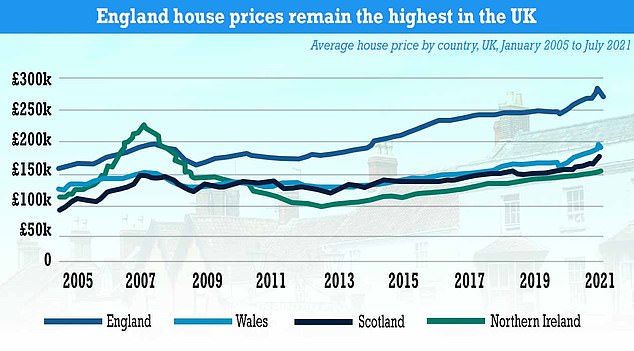 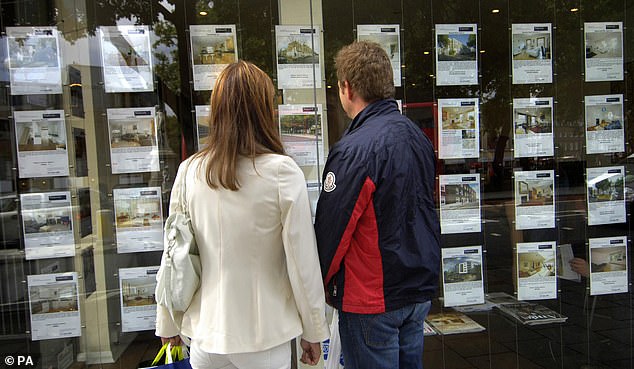 Experts said the comedown in house price growth follows an ‘artificial boom’ caused by the tax break, with predicting that demand will dramatically fall as it comes to an end (file image)

Gabriella Dickens, senior UK economist at Pantheon Macroeconomics, said the slowdown ‘marks the start of a deceleration’ that is predicted to continue over the rest of the year as the stamp duty threshold will fall back to £125,000.

Ms Dickens added that it also comes amid ‘impending pressure on households’ real incomes from higher CPI (Consumer Prices Index) inflation and the withdrawal of the furlough scheme’.

She previously predicted house prices will begin to increase again at the end of 2022, estimating that prices at the end of next year will be four per cent higher than in 2021.

She added: ‘Mortgage rates have fallen sharply in recent weeks and have room to fall further, while high levels of job vacancies suggest that the shake-out in employment in quarter four will be limited and reversed over the following quarters.’

Although there has been a slump in house price growth as the stamp duty holiday comes to an end, average prices still remain higher than recorded the year before.

The North East was the English region with the highest annual growth, with average prices increasing by 10.8 per cent in the year to July to reach £145,000.

The lowest growth was in England’s capital, which sat at just 2.2 per cent. London’s average price remains the most expensive of any region in the UK at £495,000.

Mr Patel said: ‘For many first-time buyers the whole process of realising their dreams of homeownership has become a whole lot more difficult. 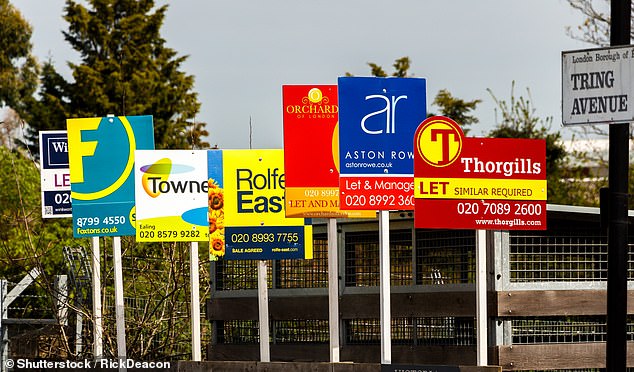 But house prices still remain higher than the year previously as the ONS revealed that the average price increased by 13.2 per cent between June 2020 and June 2021 (stock image)

‘While some will have benefited from keeping their jobs and perhaps boosting their savings, others will have been less fortunate.’

The Government’s stamp duty holiday, introduced when the pandemic hit last year, has fuelled the rapid rise in prices.

Last month, influential think tank The Resolution Foundation said although the stamp duty holiday may have seen house prices rise, the property market would have remained buoyant, with low interest rates, higher savings rates, and the desire for more space and the move into more rural locations.

This rise, which can save buyers thousands of pounds, has been blamed for hefty increases in house prices since last spring as buyers scrambled to take advantage of the tax break.

But the Resolution Foundation says this criticism is ‘wide of the mark’ and house prices have been growing in Germany, the US, Canada, Australia and France at a similar, if not greater, rate than in the UK.

Meanwhile, analysis by online property platform Twindig appears to back up the Resolution Foundation report, as it shows house prices grew most in areas with least to benefit from the stamp duty holiday.

Using data from the Land Registry, Twindig looked at the locations across the UK that saw property values surge most and least during the time of the tax break.

The biggest winner in percentage terms was Richmondshire, which is located in the northern area of the Yorkshire Dales including Swaledale and Arkengarthdale, Wensleydale and Coverdale.

The five biggest losers were all in London, with the City of London in at first place (down 13.2pc) followed by the City of Westminster (down 7.9pc), Kensington and Chelsea (down 4.8pc), Southwark (down 1.7pc) and Hackney (down 1.6pc). 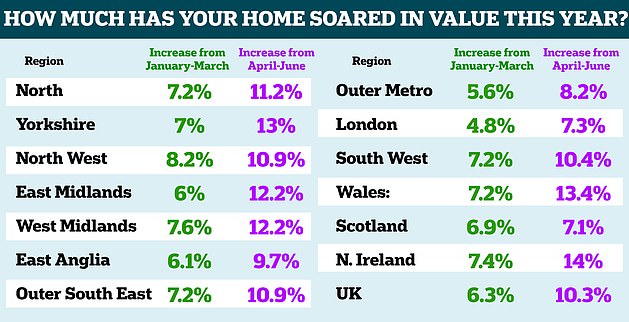 ‘That begs big questions about value for money, especially when we consider that the policy in England and Northern Ireland alone looks set to cost an estimated £4.4 billion in forgone tax revenues.

‘We must also remember that, regardless of its drivers, the house price surge of the last year has increased wealth gaps in our country and left many aspirant first-time buyers even further away from realising their ambitions of owning a home.’

According to Halifax, Wales has seen the fastest rate of growth over the past 12 months. This is closely followed by the North West and the Yorkshire and Humber region as locked-down homeowners hunted for more space and outdoor access.

But the South of England, which has traditionally been the growth engine of UK housing prices, is lagging behind – especially in Greater London where prices are up just 3.1 per cent.

Russell Galley, managing director at Halifax, said these prices likely reflected the shift in preference for properties with more space as well as Brexit’s impact on the capital.

But he added that prices could be pushed even higher across the country as lockdown restrictions have led to a bigger savings build-up for homebuyers.

Mr Galley continued: ‘While these effects will be temporary, the current strength in house prices also points to a deeper and long-lasting change as buyer preferences shift in anticipation of new, post-pandemic lifestyles.

‘Greater demand for larger properties with more space might warrant an increased willingness to spend a higher proportion of income on housing.’