Brussels: Austria and Denmark have announced plans to reopen their societies after coronavirus lockdowns, hoping they may have already weathered the worst of the first wave of the pandemic.

Belgium, France, Spain and others are similarly examining how they will loosen some restrictions on public life. But European leaders are cautious because some countries that have sought to return to normal, such as Singapore and Japan, have seen waves of new infections. 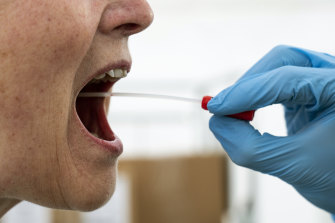 A medical worker performs a mouth swab on a patient to test for Covid-19 in a tent extension of the Rigshospitalet Hospital, in Copenhagen, Denmark.Credit:AP

Both Austria and Denmark plan to lift restrictions in stages. In Austria, small shops are slated to reopen on April 14, with larger stores to follow on May 1. Restaurants, hotels and schools may be able to reopen in mid-May – though that decision will be assessed at the end of April. Strict rules about masks, social distancing and the number of people allowed into a shop at any one time will remain in place, but public events may resume in July.

In Denmark, the plan is for nursery and primary schools to reopen on April 15, while companies will resume business gradually.

Austrian Chancellor Sebastian Kurz credited his country's early response – it imposed a national lockdown on March 16, earlier than some of its neighbours. 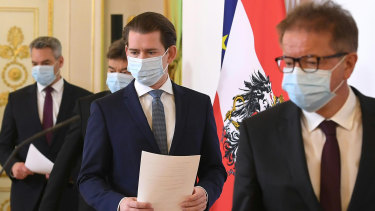 Austrian Chancellor Sebastian Kurz, centre, arrives for a coronavirus news conference with other ministers in Vienna.Credit:AP

"We reacted faster and more restrictively in Austria than in other countries and were therefore able to prevent the worst from happening so far," Kurz said, removing a blue surgical mask to speak at a news conference. "The quick and restrictive reaction now also gives us the opportunity to get out of this crisis faster."

Austria has seen three consecutive days in which the number of COVID-19 recoveries has exceeded the number of new cases. On Monday, Austrian authorities reported 241 new infections and 465 recoveries over the previous 24 hours. The slowing spread of the virus has relieved pressure on the medical system and allowed for planning the next step.

But Austria's announcement also seemed tailored to people who are growing frustrated and restless. Kurz asked citizens to hold firm to restrictions – an effort that has been made more challenging by a wave of beautiful weather that has settled on Europe during the holiday period.

Actions this week "will determine whether the post-Easter resurrection that we are all hoping for can take place," Kurz said, invoking the religious imagery.

Announcing the plan for lifting restrictions, Danish Prime Minister Mette Frederiksen said, "It's like walking on a line. If we stand still along the way, we can fall. If we go too fast, things can go wrong. Therefore, we must take one cautious step at a time. And we do not yet know when we have firm ground under our feet." 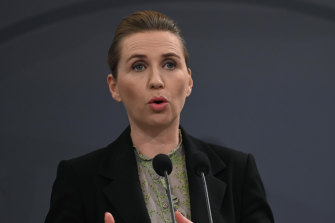 Border controls would remain in place, and gatherings of more than 10 people would remain banned, she said. If the number of infections starts climbing again, Denmark will immediately reimpose restrictions.

Although other European countries are eyeing exit strategies, most have been hesitant to commit to particular dates – and they have sought to temper their citizens' expectations about a return to ordinary life.

German Chancellor Angela Merkel said last week that she "would be acting absolutely irresponsibly if I simply gave you a specific date today when the measures could be abolished, or at least relaxed, but then could not keep promises because the infection numbers did not allow it."

But she promised that "the federal government and I, personally, are thinking day and night about how we can both protect everyone's health and have a process that will make public life possible step by step."

In France, Prime Minister Edouard Philippe said last week that lifting rules would be "frighteningly complex" and that people should not expect a "general deconfinement, all at once, everywhere and for everyone".

As with so much of the response to the coronavirus crisis, the rollback of restrictions may vary widely from country to country in Europe. Austria appears to be planning to allow its entire population to start moving again. Other countries, including Italy, Germany and Britain, have contemplated allowing only people with Covid-19 antibodies to resume ordinary life, thus splitting the population into immune and non-immune groups. That strategy would rely on tests that are not yet readily available.

There is also the question about when to reopen borders between countries and resume the free movement that has been fundamental to the European Union. Leaders may not trust that their neighbours have beat back the virus as successfully as they have. And maintaining control while allowing one's own citizens to move more freely internally may mean a hardening for external borders for a time.

Asian countries that have eased restrictions have struggled with waves of new infections, giving Europeans serious pause. Singapore this week became the latest to reverse course and impose a lockdown after winning initial praise for its aggressive coronavirus response. The country had avoided drastic restrictions after widespread testing and contact tracing. But on Sunday the country posted its highest-ever daily infection count, and starting Tuesday, schools and businesses were to close in the same ways they have elsewhere in the world. It had a total of 1375 confirmed cases and six deaths on Tuesday, according to Reuters.

Japan has also experienced a spike in infections after social distancing restrictions eased last month, and Prime Minister Shinzo Abe said he planned to declare a state of emergency covering Tokyo, Osaka and other hard-hit regions. He also announced a much larger-than-expected stimulus package of 108 trillion yen ($1.6 trillion) to support households and businesses struggling from the impact of the pandemic. Japan recorded a rise in the number of infections on Sunday. On Tuesday it totalled 4777 confirmed cases and 108 deaths, according to Reuters.