Australians stopped singing God Save the Queen as our national anthem in 1984, but nearly 40 years later our elected leaders are still expected to promise to serve the Queen of the United Kingdom.

We now sing Advance Australia Fair with different words that better reflect our modern nation. Our words should reflect who we serve – just as a new police officer taking an affirmation of service to the people or a doctor taking the oath to serve their patients state when they take on their duties. 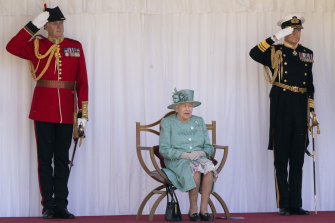 The wrong master: MPs are required to swear allegiance to the Queen.Credit:Getty

New Australian citizens are asked to pledge their loyalty to Australia and its people. As their elected representatives, our duty is to the Australian people above all else and our oath of office should reflect that important fact.

Australia is one of the few countries in the world whose people do not require their elected representatives to swear to serve their interests in Parliament. As it stands, when an Australian is elected to the Federal Parliament they are required to swear an oath or take an affirmation to Queen Elizabeth II and her heirs and successors before they can take their seat in Parliament.

In 2021, why aren’t new or returning members of Parliament required to swear to faithfully and diligently serve the people? This must change and it will require amending the constitution to make it happen.

The Canberra bubble is alive and well when we ignore pledging allegiance to Australians in favour of a distant monarch in the important oath of office. We are pledging to serve the wrong master.

The requirement to swear to serve the monarch has been part of our constitution and parliamentary process since Federation and despite several parliamentary inquiries recommending a referendum to amend this outdated provision, no government has had the courage to ask the people to support a relatively simple and straightforward change.

Surely, we are mature and sensible enough to consult people at the next federal election and ask them if they want to amend the constitution to require their elected representatives to promise to serve them in Parliament.

The Australian people have the right to demand this of us. In doing so, we would also be removing an ironic inconsistency that exists in our constitution. Under section 44, a person is not eligible to be elected to the Parliament if they are under any acknowledgment of allegiance, obedience, or adherence to a foreign power. Yet as soon as they are elected to Parliament we require them to swear allegiance to the head of a foreign power!

It is nonsense. The role and duty of Australia’s parliamentary representatives must be first and foremost to serve the Australian people who elected them, not the monarch of a foreign country.

Critics will claim the words in the constitution do not matter and our elected representatives are accountable to voters at each election.

The constitutional oath of office for our elected representatives should be amended to a pledge of allegiance to the people of Australia and the Commonwealth of Australia. It’s as simple as that.

Constitutional reform has proven difficult in recent decades to the point where many of our constitutional provisions are out of date and do not reflect Australians and our values.

Our constitution has gone stale and is in dire need of a refresh. We should start with proper recognition of our First Australians and a Voice to Parliament as priorities for reform.

We should then amend section 42 and require our elected representatives to pledge to serve those who matter most – the Australian people.

Matt Thistlethwaite is the member for Kingsford Smith and federal Labor’s shadow assistant minister for financial services and the republic.

Is Breaking Bad the best show ever? Far Out Magazine certainly thinks so, calling it the “greatest TV series of all time.” Those are some…