Professor Thomas Maschmeyer sat on his verandah with colleagues planning how they could revolutionise battery technology that had been around for 140 years to make it cheaper and more effective than other options on the market. Little did they know their idea would be worth millions of dollars six years later.

Gelion, a British-Australian battery tech company initially formed by Professor Maschmeyer at the University of Sydney, is preparing to ramp up production of their zinc-bromide Endure batteries. The creators say these will help decarbonise the electricity market and slash the cost of storing surplus renewable energy. 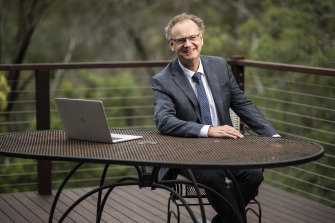 Professor Thomas Maschmeyer sat on his verandah overlooking his garden with colleagues debating if they should take the plunge into the renewable market. Six years later, the company is about to list on the London Stock Exchange.Credit:Wolter Peeters

One of the zinc-bromide batteries’ major drawcards is their inability to catch fire and their suitability for harsher climates. This makes them ideal for bringing power to regional communities.

In a huge leap, the company, which now has partners overseas and employs 30 people, is expected to launch an initial public offering on the London Stock Exchange Alternative Investment Market on November 30. Gileon’s market value will be $285 million with a share price of 145p.

While batteries using a zinc-bromide combination were patented in 1889, it has taken innovative chemistry to develop the materials into a gel that is safer, longer-lasting and potentially much cheaper than existing alternatives, such as lithium-ion storage.

“[The Australian government] has a role to play supporting the new economy, supporting renewable energy at low power prices, supporting jobs and paying dividends in investment in the public sector – it’s not a black hole,” Professor Maschmeyer said. “It helps to show that Australian tech is here to stay and is competitive on the world scale.”

Funds raised will be used to develop the Endure battery for stationary renewable energy storage, and back further research into Professor Maschmeyer’s latest project, which aims to make lithium batteries safer, more energy dense and more useful to the electric vehicle and electric aviation sectors.

The announcement marks the first time a University of Sydney innovation has been listed on any stock exchange. The company hopes to break even on an earnings basis by the 2024 financial year.

The launch comes as household power bills are predicted to fall over the next three years, with state government commitments to cut greenhouse gases driving an influx of cheaper renewable power into the electricity grid.

The Australian Energy Market Commission’s report, released on Thursday, said the biggest driver of price falls over the next three years would come from cheaper power sources from wind and solar projects. These weather-dependent generators are set to be supported with on-call dispatchable power from large-scale batteries and gas. This could include batteries like those made by Gelion.

Bruce Mountain, the Director of the Victoria Energy Policy Centre, said Australia had been a quick adaptor of large scale-batteries.

“Hardly a day goes by that you don’t hear about a new proposal,” he said. “Australia has a deep pool of commercial and tech-savvy people who are open-minded and innovative.”

He added that, unlike other sectors that require massive technological overhauls, the power sector’s main transition challenge was commercial arrangements, regulatory arrangements and the role of governments.

A guide to the environment, what’s happening to it, what’s being done about it and what it means for the future. Sign up to our fortnightly Clear Air newsletter here.