A desperately ill gorilla born at an Australian zoo has been given a second chance at life after the head zookeeper decided to care for the young primate himself.

Zookeeper Chad Staples has reared baby gorilla Kaius through the ‘roughest of nights’ after his traumatic birth at the Mogo Wildlife Park in Mogo, along the New South Wales south coast, last month.

His mother, Kipenzi, was scheduled to have surgery to remove the placenta after his birth, but Kaius’ father, Kisane, for unknown reasons, took him away during a vital feeding window.

When staff managed to get Kaius back 14 hours later, he had developed sepsis pneumonia. 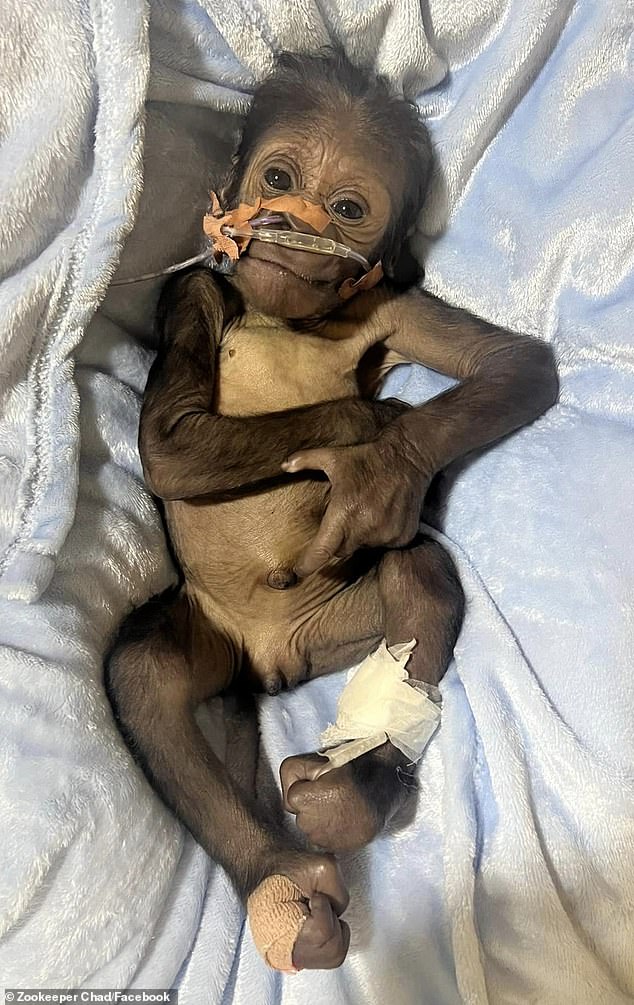 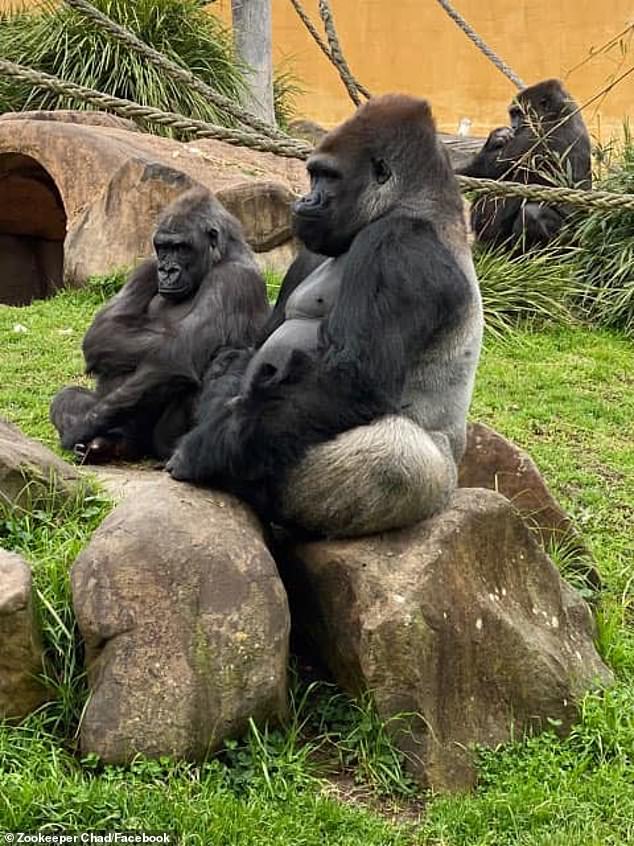 The young primate’s mother, Kipenzi, was scheduled to have her placenta removed. Kaius was taken by his father, Kisane, before the surgery (pictured, Kaius’ family)

Doctors, nurses and vets from the local area rushed to the Mogo Wildlife Park to help Kaius, who has since remained in a stable condition.

Chad Staples, along with staff, have been taking care of the young gorilla since his mother left him when Kaius was placed near her.

‘On the first night I had him, when all the health care people had treated him and left, we all knew there was a high chance he would crash overnight,’ Mr Staples told The Sunday Telegraph.

‘Everyone puts it down to skin on skin contact and giving him the emotional connection and stability. What got his heart rate down and what stabilised his breathing was that contact of him being on my chest, listening to my heartbeat.

The head zookeeper said hearing his heartbeat is ‘what got his breathing calm’ and ‘his heartbeat down’ so the antibiotics used on Kaius could kick in.

He wrote in a social media post that there were ‘some horrible scary moments and some very positive signs’ over the coming days as he looked over Kaius. 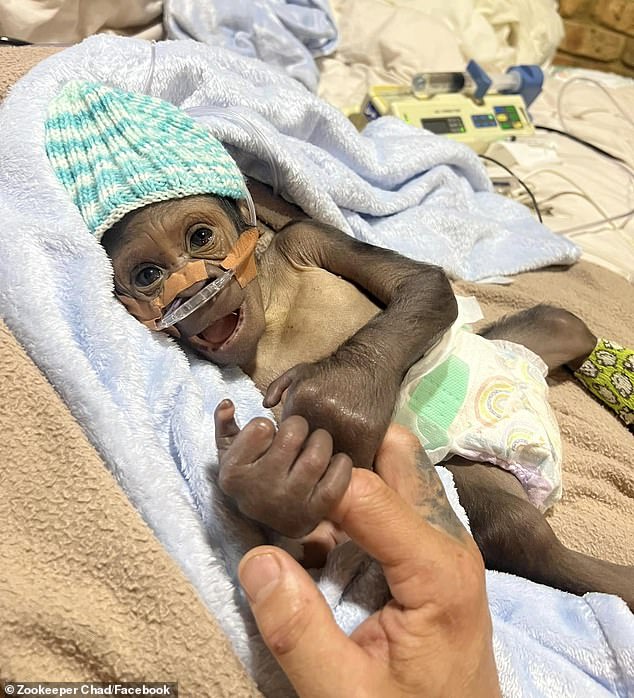 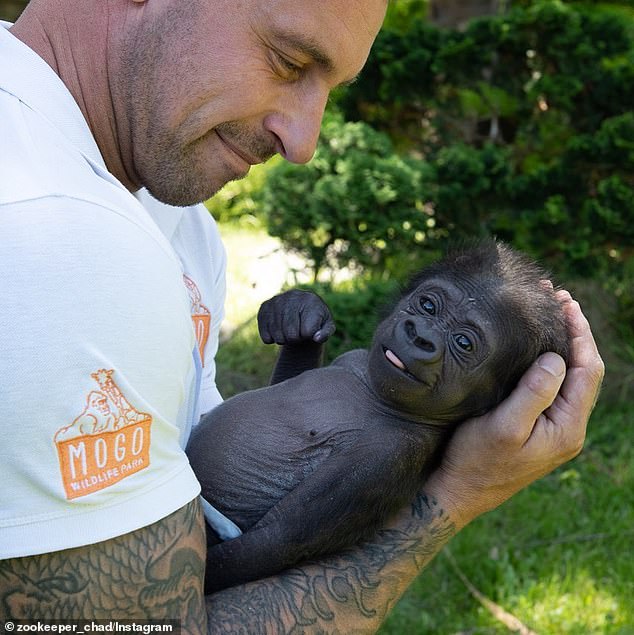 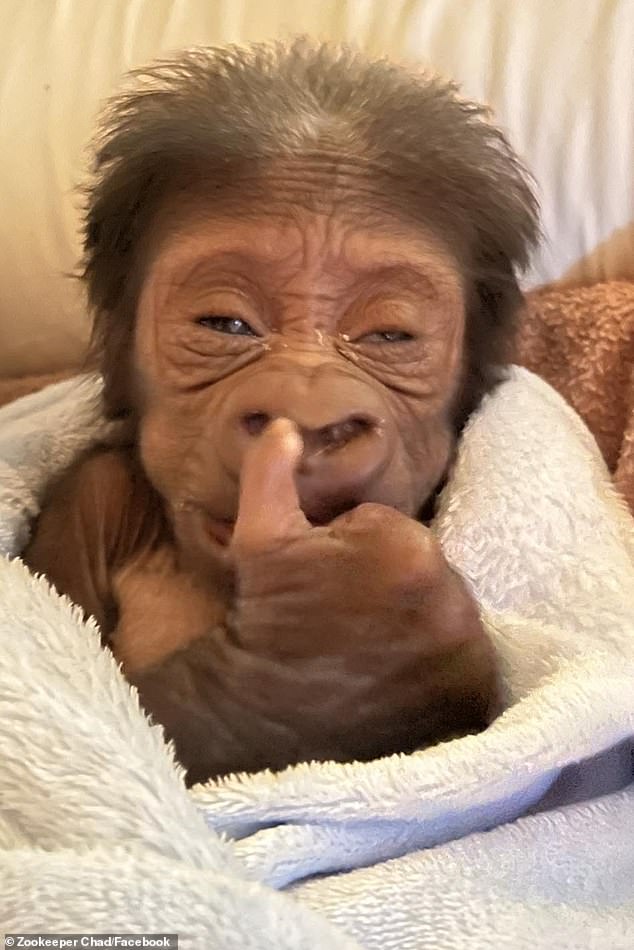 Kaius has been making good progress in his recovery. Mr Staples revealed staff were able to remove his feeding tubes and oxygen lines one week after he started looking after him

In a subsequent update he said, ‘Our beautiful little boy is make his own little steps forward. Still on all his medications but with such brightness in his eyes which gives us all hope.’

Mr Staples explained that the end goal was to reunite Kaius with his family.

A week after staff began looking after the young gorilla, Mr Staples said they were finally able to remove his feeding tubes and oxygen lines and take him off medication.

‘Little Kaius has become my absolute focus over the last 3 weeks,’ Mr Staples said in a recent update.

‘He is a tiny baby now but I want to see him as a beautiful, strong Silverback in the future with his own family group to look after.’

The zookeeper explained that caring for Kaius ‘mimics’ the care provided for a human baby in the early stages. 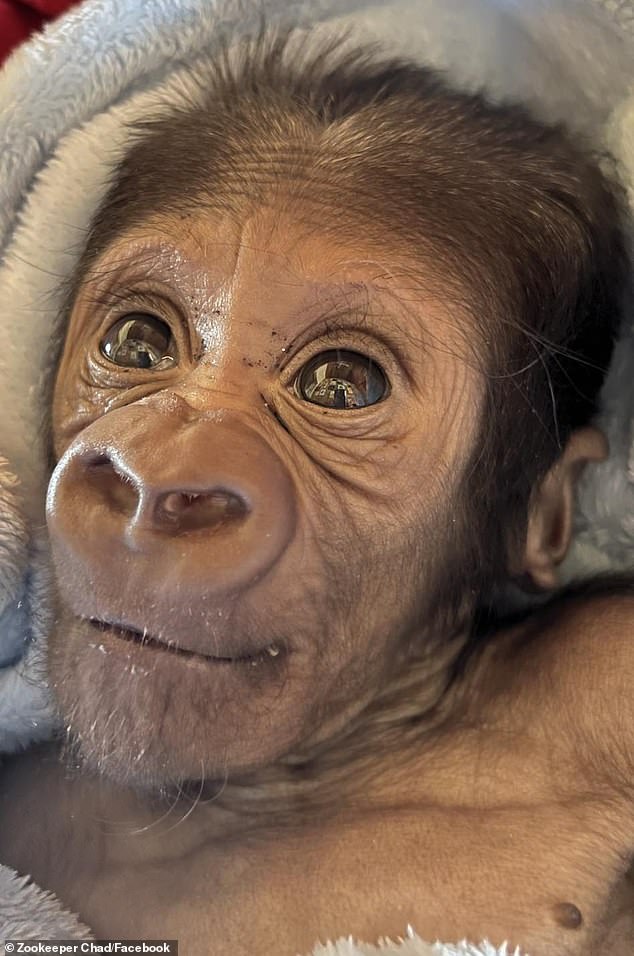 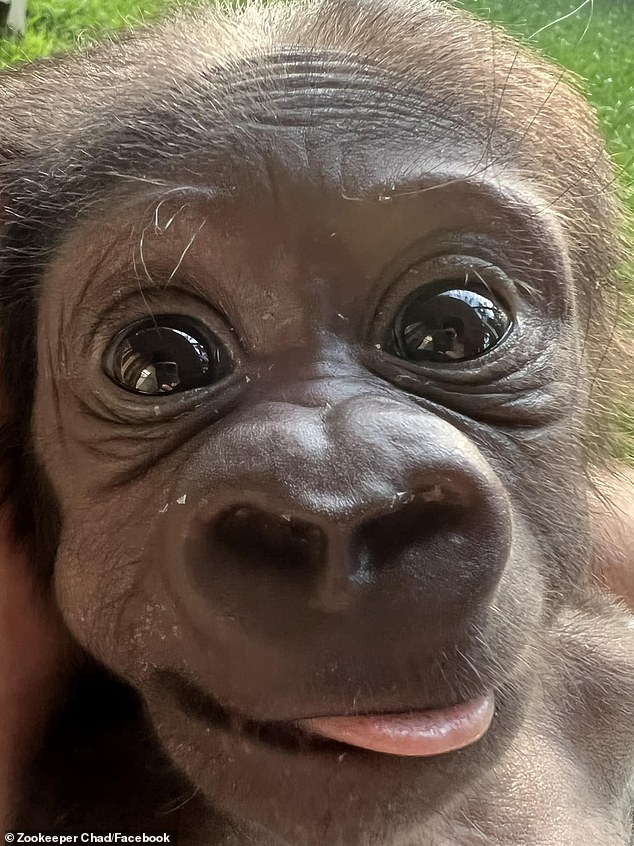 In the most recent update, Kaius has gained a kilo since Mr Staples began to care for him. He said that Kaius is ‘so bright and full of life’ as he continues his recovery

They have to address his hygiene, medical needs and ensure he gets the right nutrition but staff also need to provide emotional care.

‘Kaius needs to know he is loved and protected just like a baby and please know I am providing this now around the clock,’ Mr Staples said.

In positive news, Kaius now weighs at a healthy three kilos, putting on a single kilo after the head zookeeper began to look after him.

Mr Staples said the young primate is now ‘so bright and full of life’ as he continues his recovery.