“Freedom!” cried Tony Abbott, tooting a new dog-whistle into the ears of the electorate that ejected him so exuberantly in 2019. “She has an instinct for freedom” was his recommendation for the Gladys Berejiklian parachute-drop into his former seat of Warringah. The right’s colonisation of the idea of “freedom” is a potent and timely aspect of its brand management.

The yearning for freedom is a powerful ache right now. As per the theory of relative deprivation, the pandemic has fired the desire most in the places that have most of it. Warringah is a grumpy electorate; feelings of oppression are high. During lockdowns, we were hemmed into the mere 254 square kilometres, a space not even as big as Belgium. We were only permitted to use the beach, run or cycle in our national parks, stroll our coastal walks, swim and surf, play tennis and golf, hang around outside takeaway eateries in the sun, on condition of time limits, QR codes and facemasks. 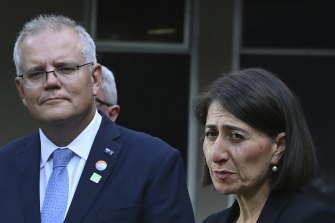 Our freedoms were curtailed by illegal entries from other suburbs come to steal our rights to our surf, our cycleways, our walks, our golf courses, our cafes, our air, etc. Australians are all mad about something at the moment, and the republic of Warringah’s madness is all our own.

It appeared that Berejiklian might be a perfect representative for such an oppressed minority. A freedom fighter, a strong independent voice, free enough to spend our money where she wanted, free of annoying bureaucratic probity checks. Independent enough to be able to invent ethical positions to suit her personal circumstances. And then the ultimate freedom: to drop in on Warringah despite never having lived here. What’s not free about that? She was free even to move here, as long as she didn’t mind the inconvenient absence of functioning ferries to the city.

In the end, it seems that not even the former premier could believe in a “freedom” that would require her, in Canberra, to submit to Scott Morrison’s leadership and other unpleasantness. She has opted for a more private career path, showing Abbott what a real instinct for freedom looks like.

In Warringah, it is debatable whether Berejiklian could have unseated the popular independent Zali Steggall. Elected partially on an anti-Abbott protest vote, Steggall has solidified her standing so that now the Liberals can’t just run anyone but Abbott and regain a seat they consider theirs; nothing less than a “star” candidate was now needed.

“Independent” carries its own connotations of freedom, but Steggall’s voting record in Parliament shows that she too is tightly bound – to the promises she made to her electorate in 2019. Not free at all, in other words.

Because they can’t rely on the inertia of the ballot-booth pencil steering itself to the name of a major party, the six crossbenchers in the House of Representatives are directly accountable to their constituents. Unlike most parliamentarians, Steggall publishes and defends her voting record. On 294 votes on legislation since 2019, she has voted with the government 159 times (so for more than half of Parliament’s real business, Berejiklian or another Liberal would make no difference).

Steggall has voted with the opposition 110 times and with only the crossbenchers 14 times. Her record of opposing the government on procedural votes such as their hundreds of gag orders, on the other hand, is close to 84 per cent. Her main achievements, she says, have been in the areas of environmental protection, tertiary education, humane treatment of refugees and the passage of a bill helping class actions. It is a check-and-balance role, but its exercise is transparent.

How much can independents actually achieve? This will be an increasingly active front in the 2022 election, as the Coalition finds itself threatened in wealthier, socially progressive electorates by independents who might, back when such a thing existed, have defined themselves as small-l liberals. Emergency doctor Sophie Scamps is running against Jason Falinski in Warringah’s northern beaches neighbour Mackellar, Allegra Spender is challenging Dave Sharma in Wentworth, Monique Ryan and Zoe Daniel are fighting the Liberals in the Melbourne electorates of Kooyong and Goldstein, and more are on their way.

The Steggall campaign model, occupying the garden that the Liberals since John Howard have left untended, is their template. Strong on the environment and integrity, mobilising disenchantment with the parties, these candidates aim to sweep up Liberal voters alienated by Morrison’s dalliance with the far right. Labor accuses Steggall of being Liberal-lite, but to be honest there were thousands of Liberal-lite voters who sent her to Canberra.

On Thursday, Steggall was sparring with Sharma and Senator Andrew Bragg over who has more impact in Parliament. It was fairly predictable stuff about urinating from inside or outside the tent, and it ended in a scoreless draw; but we can expect this internecine quarrel to grow noisier and nastier in the next six months.

The main argument against independents is they are locked out of the pork-barrelling loop. Their aims are bigger-picture, if less personally saleable to locals. So Warringah voters won’t get a clay-target shooting range. But they do have a member wholly dedicated to saving their planet. Self-interest always wins, but self-interest means different things in different places. Those who put Steggall in Canberra knew she couldn’t initiate and pass numerous laws but they did so anyway, as they wanted something different from their member. Someone to reflect their own idea of balancing freedom with responsibility.

The limitations of the independents’ “freedom” will become moot in a campaign that will be decided by where the existing anger in the Australian electorate finds its outlet. Morrison will seek any means of channelling it away from himself and his government. Unfortunately for him, it’s very hard for voters to get really angry at independents. Without power, they attract little hostility.

But there is an emerging possibility that unaligned crossbenchers can end up with the balance of power in 2022 as they did in 2010. And then the independents can taste the public anger that comes with increased relevance. As Tony Windsor and Rob Oakeshott found, the equation changes when independents can really exercise their freedoms. Perhaps the big question for Steggall and the other independents is, in the event of a hung Parliament, whether they will choose Morrison or Anthony Albanese.