A drug company says that adding an anti-inflammatory medicine to a drug already widely used for hospitalised COVID-19 patients shortens their time to recovery by an additional day.

Eli Lilly announced the results on Monday from a 1000-person study sponsored by the US National Institute of Allergy and Infectious Diseases. The result have not yet been published or reviewed by independent scientists, but the government confirmed that Lilly's statement was accurate. 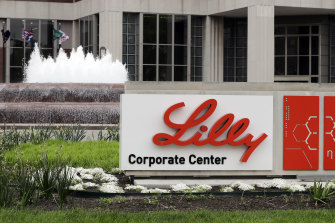 Eli Lilly conducted a 1000-person study sponsored by the US National Institute of Allergy and Infectious Diseases.Credit:AP

The study tested baricitinib, a pill that Indianapolis-based Lilly already sells as Olumiant to treat rheumatoid arthritis, the less common form of arthritis that occurs when a mistaken or overreacting immune system attacks joints, causing inflammation. An overactive immune system also can lead to serious problems in coronavirus patients.

All study participants received remdesivir, a Gilead Sciences drug previously shown to reduce the time to recovery, defined as being well enough to leave the hospital, by four days on average. Those who also were given baricitinib recovered one day sooner than those given remdesivir alone, Lilly said.

Lilly said it planned to discuss with regulators the possible emergency use of baricitinib for hospitalised COVID-19 patients.

It would be important to know how many study participants also received steroid drugs, which have been shown in other research to lower the risk of death for severely ill, hospitalised COVID-19 patients, said Dr Jesse Goodman, former US Food and Drug Administration chief scientist now at Georgetown University who had no role in the study.

Figuring out how to best use the various drugs shown to help "is something we’re going to have to work at," he said.

Just as life in the Indonesian capital of Jakarta was starting to return to normal, the city’s 10 million residents are heading into partial lockdown for the second time.

Jakarta’s tightened social restrictions, effective from Monday for two weeks, mean businesses, malls and houses of worship can only operate at limited capacity, while dining in at restaurants and cafes is not allowed. 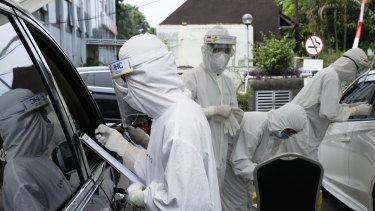 People are tested for COVID-19 in Jakarta in Indonesia.Credit:Getty Images

The markings of a rollercoaster year are plastered over Sutiwet’s small Jakarta restaurant – plastic barriers on the counters, stickers on the glass urging customers to wear masks, and a gallon of water out front for people to wash their hands.

Small business owners such as Sutiwet, who like many Indonesians goes by only one name, are bracing themselves for the economic impact.

"We almost managed to survive the first round of large-scale social restrictions, and here comes another one," Sutiwet, 45, said.

"For now, I am relieved that we are almost surviving, but it will definitely have an impact on income."

The second round of social restrictions, known locally as "PSBB", comes amid a spike in COVID-19 cases and as Jakarta's 67 designated coronavirus hospitals near full capacity.

The capital has recorded a daily average of more than 1000 new cases this month, with 43,400 cases in total and 1330 deaths since March, according to government data.

Clinical trials for the coronavirus vaccine being developed by AstraZeneca PLC and Oxford University resumed in Brazil on Monday after the country's health regulator got confirmation over the weekend that its British equivalent MHRA had approved the restart, a company representative said.

The Federal University of Sao Paulo, which is running the trials, said in a statement that 4600 of the planned 5000 volunteers have been vaccinated in Brazil without any of them reporting any serious health issues.

The volunteers have been recruited in Sao Paulo, Rio de Janeiro and Salvador in the north-eastern state of Bahia where a hospital is conducting the tests.

AstraZeneca paused global trials temporarily last week after an unexplained illness in a participant in Britain.

Brazil has the third worst coronavirus outbreak after the United States and India and has become a sought-out testing ground for COVID-19 vaccines under development in Britain, China and Russia.

Phase III clinical trials of Russia's Sputnik V vaccine against COVID-19 will be conducted in the Brazilian states of Bahia and Parana, which has plans to produce the vaccine for Brazil and other Latin American countries.

Phase III clinical trials of a vaccine developed by China's Sinovac Biotech Ltd are under way in the state of Sao Paulo, whose governor said last week it may be available to Brazilians as early as December.

Some 9000 Brazilian volunteers are participating in the Sinovac vaccine trials, which are being conducted by the Butantan Institute in Sao Paulo city and 11 other locations, including the capital Brasilia.

France has faced a resurgence of the novel coronavirus, with daily confirmed cases reaching a record level last week.

The government on Friday promised steps to speed up tests and toughen measures in high-infection zones to avert a return to the general lockdown imposed earlier this year.

A local official for the region that encompasses the city of Bordeaux cited measures such as limiting the number of guests for those in nursing homes to two each week and reducing public-event attendance numbers to 1000 from 5000.

The officials also cancelled the cultural European Heritage Days in September in the region, banned drinking and eating in bars while standing, and public gatherings of 10 people or more in parks and beaches in Bordeaux.

"This is to slow down significantly the circulation of the virus", Fabienne Buccio said.