A 22-year-old Victorian man has joined the growing list of AFL fans to be arrested and charged after sneaking into the Perth grand final on September 24.

Daniel Jovanovski is accused of using false information and documents to obtain his G2G pass into Western Australia as he had come from Melbourne, which was classed a high-risk jurisdiction, but he flew in via South Australia. 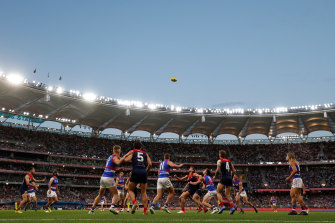 The man is alleged to have falsified documents to enter WA from South Australia for the AFL grand final. Credit:Getty Images

Police allege he had been in Victoria within the previous 14 days of the grand final and would not have met WA’s strict entry requirements.

Mr Jovanovski has been held in custody since his arrest at a Perth hotel the day after the grand final after being refused bail.

He will next face court on October 18 charged with three counts of failing to comply with a direction, one count of unlawfully possessing a controlled or prescribed drug and one count of gaining benefit by fraud.

The latest to be charged in WA, 32-year-old Caleb Cox, also entered via South Australia with a friend and has been in Perth custody since his arrest on September 28.

He has been charged with gaining entry to WA through fraudulent means relating to his G2G pass, as well as three counts of failing to comply with an emergency direction between September 23 and 27 after allegedly having been in Victoria in the previous 14 days.

Both men arrived at Perth Airport two days before the Optus Stadium decider.

Mr Cox’s friend, who is also alleged to have entered WA within 14 days of being in Victoria, had returned to the COVID-ravaged state before police were able to arrest him. Both men tested negative to COVID-19.

Another two Victorians who entered WA to watch the Demons’ win – Hayden Burbank and Mark Babbage – have also been summonsed to appear in a Northern Territory court over claims they also breached COVID-19 rules in the Top End.

It’s also alleged the men did not isolate on arrival in the NT until a negative COVID-19 test was returned, as directed.

The men have been summonsed over several charges including contravention of an emergency declaration, giving false or misleading information, uttering a forged document, and criminal deception to obtain a benefit.

The pair, who are due to appear in Darwin Local Court on November 16, allegedly spent eight days in the NT before travelling to Perth.

They are due to face Perth Magistrates Court on Wednesday.