The developers of a prominent site in Brunswick overlooking Princes Park have been accused of using the state government’s COVID-19 economic recovery strategy to avoid public scrutiny of a proposal for 168 apartments.

Property giant Mirvac has lodged plans directly with Planning Minister Richard Wynne for the controversial $147 million development with several towers between six and 10 storeys high, despite opposition from both residents and the local council. 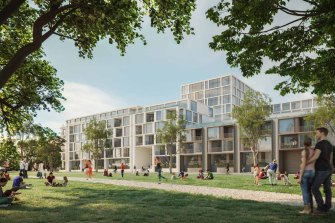 The development will incorporate several towers, including one 10 storeys high.Credit:Mirvac

The Park Street site, best known as the location of the Princes Park Motor Inn, has been the subject of a failed attempt to build a 13-storey tower and 333 apartments, which was rejected by Moreland City Council and the Victorian Civil and Administrative Tribunal.

Mirvac purchased the property from the previous developer JWLand last year for $40 million, according to the Australian Financial Review.

Rather than submit fresh plans to the council for a planning permit, Mirvac has applied to have the development fast-tracked by the state government under a scheme introduced during the pandemic to speed up projects and stimulate investment.

The Development Facilitation Program allows developers to apply directly to the planning minister for approval if they can demonstrate their project is “shovel ready” and would have an economic benefit. 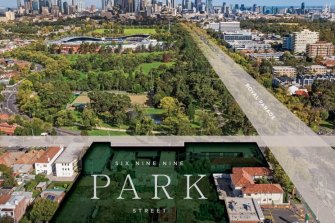 The site when it was advertised for sale.Credit:Colliers.

Moreland councillors have voiced their frustration at the process, passing a resolution in April expressing concern that their decision-making power was being removed “under the guise of COVID-19 recovery”.

A local group of 1700 residents, known as Protect Park Street Precinct, fought against the previous development in VCAT arguing that the towers would overshadow the park’s running track and many of the apartments didn’t meet proper guidelines.

The group includes several well-credentialed locals among its members, who have fundraised a financial war chest that helped defeat the previous developer.

But now they are concerned that the development will simply be rubber-stamped by the minister.

When it bought the Brunswick site, Mirvac said it had the potential to be similar to its upmarket The Eastbourne complex in East Melbourne.

Resident Adrienne Clarke, former La Trobe University chancellor and CSIRO chair, said the new proposal from Mirvac was not an improvement on the previous rejected plans.

“It’s not that we’re trying to stop it, we’re not against development at all,” she said.

“It’s a site that could and should have an award-winning development. But at a minimum, it’s got to comply with the rules. There’s an opportunity there, it’s a beautiful site.” 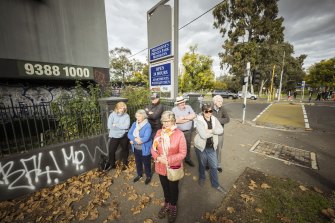 Residents are opposing a development on the site of the old Princes Park Motor Inn.Credit:Chris Hopkins

Clarke said that Mirvac should have worked with local residents to come up with a better design than what had been submitted to the planning minister.

“When it was sold to a developer with a good name, we were optimistic,” she said.

“But this move bypasses the community and the council, taking away the opportunity for us to ensure that the plans are compliant and will be of a very high standard.”

Fellow objector Giuseppe Ganci is a photogrammetrist by profession who has used his skills in measurement to analyse the plans submitted by Mirvac. (Photogrammetry is the use of photography in surveying and mapping to ascertain measurements between objects.) 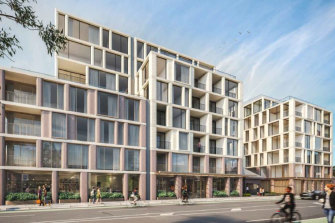 An impression of what the building will look like.Credit:Mirvac

He said as many as 75 per cent of the apartments did not meet the minimum standards required, with walls and balconies often not measured correctly.

“Their justification for ‘let’s steamroll this through’, it’s transparent it’s hollow, there’s no real benefit here for pushing ahead in expense of the community having a say.”

Moreland mayor Mark Riley said the developers were arguing that their proposal warranted ministerial intervention because it included 10 per cent of affordable housing.

This amount was insufficient, he said, to allow it to be fast-tracked.

“On all accounts the project now before the minister is a lesser proposal to that previously rejected by council and VCAT,” he said.

“Council has written to the minister and urged him to reject the development.

“The minister’s interventions via the Development Facilitation Program or other grounds really does need to be questioned and monitored closely.”

Others have started raising questions about planning permits granted under the Development Facilitation Program.

Transport Matters MP Rod Barton told the Victorian parliament in March that 295 applications had been submitted for accelerated approval by the minister and that “all due progress had been forgotten”.

He cited one example in Prahran, when Wynne approved an aged care home that had been knocked back by council, VCAT and the Supreme Court.

“It’s completely removed everybody else from the equation, it’s causing much angst and I think it’s something we need to be looking at,” he told The Sunday Age.

“I think everybody accepts we need a faster process and some councils can be a little bit recalcitrant but it’s going to have a massive impact. Unless you live near one of these, you don’t know it’s going on.”

Mirvac was contacted for comment but did not respond before deadline.

A planning department spokesperson said the minister was currently considering the planning scheme amendment and permit.

“A decision on the intervention request is likely to be made later this year,” they said.