Mr Andrews’ request for a so-called "torch centre" to be set up in Melbourne was part of his attempt last October to court Chinese investment and which saw him describe Victoria as "China's gateway to Australia". The offer was made in a letter sent last year to China’s Minister for Science and Technology, Wang Zhigang, and followed up in person in a meeting between the Premier and vice-minister Huang Wei in October last year. 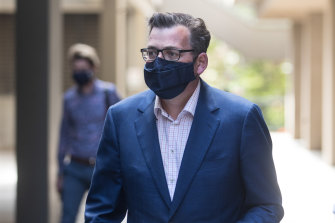 Torch centres in China bring together universities and high-tech start-ups with the aim of fostering innovation. They have been crucial to China’s rising fortunes since 1988 and the Chinese government credits them with contributing almost half of China's patents and 11 per cent of its gross domestic product. The University of NSW already hosts such a centre, but risk analysis group Foreign Brief says they have also been linked to China’s potential acquisition and development of "grey area" technology that could include military use.

A briefing prepared for Mr Andrews ahead of his meeting with China’s most senior science and technology officials in October, 2019, said the Victorian government "welcomes the establishment of a torch centre in Melbourne and is ready to work with [the ministry] to explore how this can be achieved".

“Victoria is proud to have signed a Belt and Road agreement with China. Victoria is ready to make tangible progress under the MoU and we would like to take the opportunity to explore practical measures of collaboration with the ministry,” Mr Andrews wrote in his letter to Mr Wang.

Torch centre overseas facilities "assist Chinese technology companies in establishing their presence in foreign markets,” the briefing said, adding that, under a proposed Cooperation Agreement, the "complementary research and innovation capabilities" of China and Victoria would increase commercial opportunities through research and development.

Mr Andrews’ desire for a high-tech Chinese presence in Melbourne is detailed in dozens of pages of documents about Victoria’s Belt and Road Initiative dealings that have been released by the Premier’s Department under the Freedom of Information Act.

But South Australian independent senator Rex Patrick said Victoria's offer looked "remarkably naive" in the context of China's history of intellectual property theft, and a former head of China analysis at Australia’s Defence Department, Paul Monk, said he was worried about Australia being pulled into China's "sphere of influence".

Australia has welcomed Chinese investment over many years, but strong debate has arisen in the past two years over questions of Communist Party influence, particularly around President Xi Jinping’s Belt and Road Initiative, which is increasingly seen by its critics as an instrument of China's foreign policy.

Prime Minister Scott Morrison has promised to legislate to give him the power to tear up agreements between states and foreign powers, but Mr Andrews has seen the Belt and Road agreement as a creator of jobs in Victoria, with a particular focus on transport infrastructure such as the Suburban Rail Loop and manufacturing, such as the controversial high capacity trains.

On Friday he said, "I think a strong relationship and a strong partnership with China is very, very important."

In 2016, the University of New South Wales became the first institution outside of China to establish a torch centre through a $100 million partnership with the Chinese Ministry of Science and Technology.

The deal was signed with the approval of the Turnbull government, but it attracted strong criticism from security analysts in Australia and the United States because the Chinese government was able to direct the university about which companies it was to work with, including Chinese technology giant Huawei and several others whose technologies may have had military use.

Australian security and intelligence agencies have repeatedly advised the federal government to block Huawei from involvement in the rollout of the National Broadband and 5G networks on security grounds. 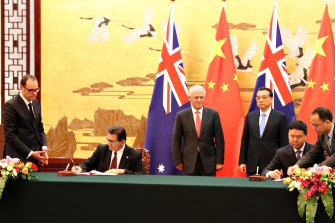 Australian Prime Minister Malcolm Turnbull and Chinese Premier Li Keqiang at a special signing ceremony between UNSW and the Ministry of Science & Technology for a Torch facility.

Another collaboration had the UNSW Torch Centre working with researchers from China’s University of Defence Technology. UNSW vice-chancellor Bryan Boyle said in 2017 the university "goes to great lengths to work within Australian government regulations to ensure our national security is protected", and that "all of our work satisfies the Commonwealth Defence Trade Controls".

“People will say other countries do comparable things with technology and research collaboration like the Americans, British or Israelis and that’s true. But the objection to China is based not on racism but regime grounds,” Mr Monk said.

“This is an increasingly aggressive and disturbing regime that will attempt to use the Belt and Road to subordinate us to its sphere of influence and detach us from the US alliance. To think otherwise is wilfully blind.”

Senator Patrick said the FOI documents revealed an "extraordinary case of a state government pursuing a shadow foreign and trade policy, quite separate and independent from the federal government".

"The Victorian government’s enthusiasm to enmesh Chinese state-owned enterprises with the Australian economy – including critical infrastructure and virtually every area of Australian technological excellence – is particularly striking," Senator Patrick said.

"Given the widespread evidence of industrial scale, state sponsored and directed intellectual property theft by China, the Victorian government’s interest in the Chinese Ministry of Science and Technology establishing a so-called 'Torch Centre' in Victoria at best looks remarkably naive."

Mr Andrews’ October 2019 China trip also involved his presence at a signing ceremony to extend a cooperation agreement between Melbourne’s Monash University and the Commercial Aircraft Corporation of China (COMAC).

The Age and The Sydney Morning Herald earlier this year revealed concerns about this partnership within senior levels of the federal government due to concerns COMAC had engaged in alleged industrial espionage in its bid to rival Boeing and Airbus as a producer of commercial jets.

COMAC’s agreement with Monash will lead to a new research and development centre at Monash’s Clayton campus geared towards advanced manufacturing, artificial intelligence and robotics.