A 2000-year-old statue of Buddha has been returned to the government of Pakistan by an Australian family who had kept it in their home for half a century.

Romy Dingle's father was an Australian diplomat in Islamabad. The family would go on road trips through the countryside and one day her mother bought artefacts at a roadside stall. 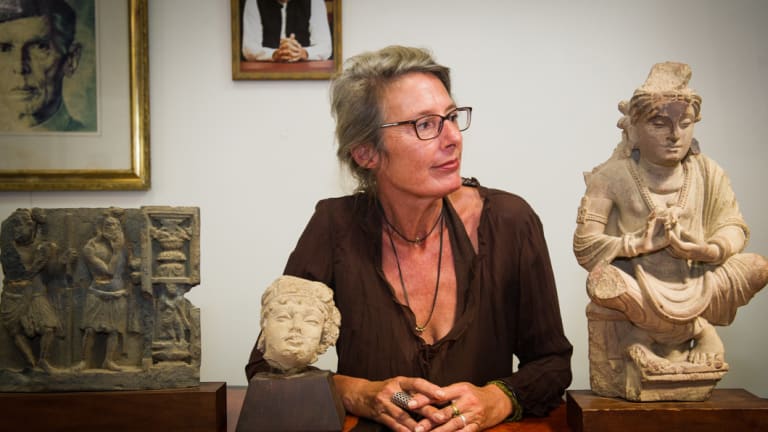 Romy Dingle looks at the Buddha who has been part of her life, together with the two other ancient objects from Pakistan which she returned.Credit:Elesa Kurtz.

When the diplomatic posting ended, they brought the objects, including the ancient Buddha, back to Canberra. The sacred relic has remained in the family home ever since.  They – and "he" as she calls the statue – lived in the Dingle House, one of the iconic Canberra houses designed by the architect, Enrico Taglietti. It accompanied her mother and Roma and her sister to a new home in Sydney.

Now, the daughter has given it and two other objects back. They are in the Pakistani High Commission in Canberra – back home in a sense.

At a ceremony there, the Pakistani High Commissioner in Australia, Babar Amin, thanked the donor for a "very precious piece". 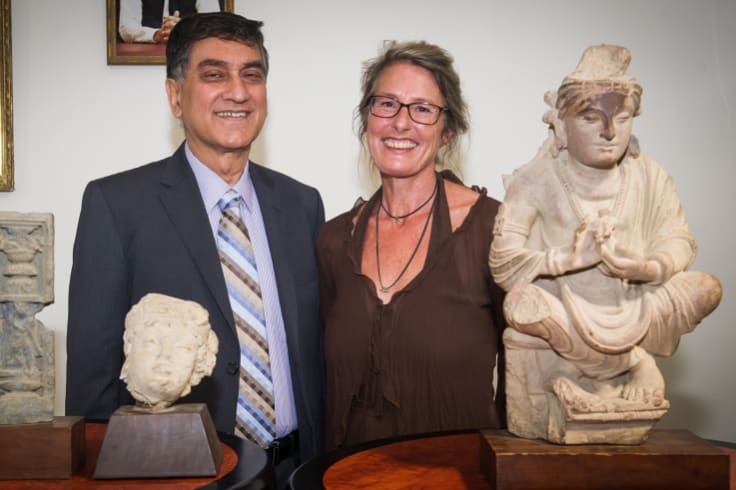 The statue was created around 1900 years ago in the north of Pakistan where the so-called Ghandaran civilisation flourished.  It achieved high standards of art and the small statue exemplifies that.  He has a beatific and mysterious smile which shines through even though some of his limbs have been damaged. He was holding a bowl or water flask, according to the ambassador.

The ancient state of Ghandara was a mixing-pot of religions because it was on the Silk Road trade route from China westwards towards Europe, and Buddism was one of those which thrived.

"He has been with me most of my life. My mother asked me to care for it some years ago. It's been in a quiet corner of my house," Romy Dingle said.

When they returned from Pakistan in the 70s, she said paperwork for the transportation of valuable objects from poor countries was not essential. The Buddha just came back with the family. Such a removal of objects of delight and importance in a nation's heritage would be deeply frowned on today and probably illegal.

It's impossible to put a monetary value on the piece and Romy Dingle doesn't want to. She just wants to return it to what she thinks is its rightful place.

"This here is a gift on behalf of my mother, my sister and myself", she said at the Pakistani embassy. Her mother and father are both now dead.

She hadn't actually worshipped the Buddha in her home but she has been affected by "his peace".

"I think he's very much about love and about holding on to the places that can be neglected in this frantic world. That's what he came to be for me."

It wasn't a sudden decision to return it. She had approached the National Museum of Australia but they weren't able to establish its ancient past so she approached the Pakistani government who contacted archaelogists in Pakistan. These experts identified it as one of the country's treasures.

"It just dawned on me that it should be gifted to the Pakistan embassy. It seemed the right place", she said.

It is not clear what will now become of the statue and two other artefacts which Romy Dingle also gave to the embassy as objects brought back by her parents.

Of the Buddha, she said, "My wish is that he should be shared. He doesn't belong in my small world."