London: A top virologist who helped wipe out coronavirus in a small town during Italy's devastating first outbreak says the country's unique approach to testing explains why it has so far avoided the worst of a second wave sweeping Europe.

One of the worst-hit countries at the start of the year, Italy is now earning praise for keeping its economy open for four months without fuelling a major spike in cases and deaths. 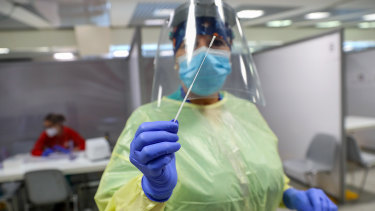 A healthcare worker holds a swab sample at the COVID-19 rapid test facility at Fiumicino Airport in Rome.Credit:Bloomberg

Its total cases rose by 13 per cent over the past fortnight compared to the one prior. The growth in Britain over that same period was more than 12 times higher. Fifteen other European countries also had a higher number of deaths per capita than Italy over the last two weeks.

Experts have credited its success to high levels of face mask usage, rapid airport testing, compliance with social distancing and a gradual easing out of a strict national lockdown.

However, its unorthodox testing and tracing method has also captured attention. When a positive case is detected, Italian authorities test everyone in that person's orbit — including their family, friends, colleagues and neighbours — regardless of whether they were ever exposed.

Andrea Crisanti, a professor of microbiology at the University of Padua and expert in molecular parasitology at Imperial College London, said the approach picked up asymptomatic cases and was a realistic answer to the limitations of highly detailed contact-tracing regimes such as delays and resourcing constraints.

"At some point, it really gets beyond your capability," he said of tracing based on certain dates and locations.

"Tracing is important and plays a role. But it is very imprecise. It is nearly impossible for someone to recall all contact they had over the past five or so days, particularly if the person is ill. They often don't recall, they don't remember.

"We are looking wider and by doing that we also pick up many asymptomatic people, which helps break transmission."

Crisanti said seeking out the full "network" of a COVID-19 positive patient stops the disease from spreading but often also helps find the initial carrier.

Crisanti rose to prominence earlier this year after engineering a pilot study in the northern town of Vo where nearly all 3000 residents were tested. In the first round, 73 people were found to be infected. Only eight new positives were found in the second round and the virus was effectively eradicated within two weeks.

Crisanti's work formed the basis of a nationwide network testing regime. He said the Vo study established a key lesson: that testing of everyone — regardless of whether they have symptoms — can control the pandemic.

But Crisanti and other experts fear complacency and warn the country could easily be hit by a major second wave if the public changes its behaviour and the network testing system comes under pressure.

"We see now the current situation as an unstable equilibrium," he said.

"On one side, we are giving the virus a chance to transmit by opening industry and opening schools. On the other hand, another force that helps the virus spread is our own behaviour. So we have to be very careful about both."

Ramping up testing to the scale needed as cases grow would be a challenge, he said.

Italy is testing fewer people than some other countries in Europe. But while the percentage of tests coming back positive is creeping up, it is lower than most others.

"In order to implement this strategy, you need to really escalate the testing capability and I don't think we are there yet," Crisanti said.

"We are reopening schools and all activities. This provides an opportunity for the virus to spread and this will cause more cases and require more testing capability.

"I do not know in the long-term whether we have the testing capability to trace the virus as the cases increase."