Taliban officials are sending their daughters to overseas schools despite the regime not allowing many female secondary students in classrooms, according to a report.

Senior officials are sending their children to schools and universities, including in Qatar, southwest Asia, while millions of female secondary school students in Afghanistan have been deprived of education since the Taliban seized power in August.

Many Qatar-based Taliban leaders have chosen to send their sons and daughters to school, with the majority in Doha enrolling their daughters in school, according to a report by Afghanistan Analysts Network.

Millions of female students are still unable to go to school in Afghanistan, as the Taliban government has so far only reopened high schools for boys and primary schools for all students.

But the Taliban have pledged that all women and girls can access schools at all levels when the remaining schools across the country reopen in March.

Meanwhile, half of the Afghan population are said to be facing famine in the coming months amid a humanitarian crisis in the country.

The report, conducted by the non-profit policy research group, interviewed 30 people, including nine senior Taliban officials and one Taliban sympathiser. 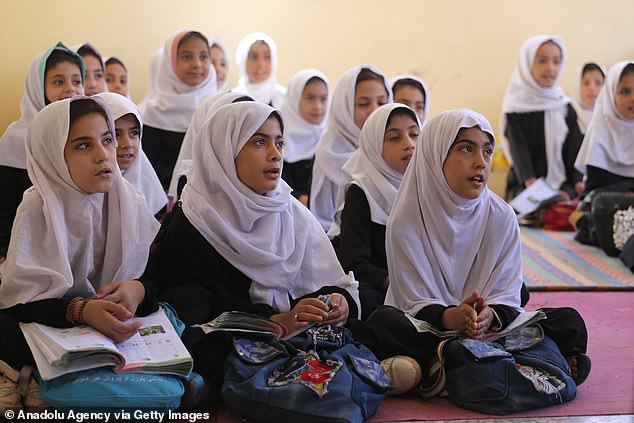 One Qatar-based Taliban official, who was a member of the Taliban’s negotiating team, said his two daughters studied in a Qatari state school, with one finishing her education in 2020.

He said: ‘We lived for three years not much bothered by education, but since everybody in the neighbourhood was going to school, our children demanded that they go to school too. So, in the fourth year, I had to send my three sons and two daughters to school.’

Other Taliban officials chose to send their children to private schools run by Pakistanis, based in Qatar, which follow a Pakistani curriculum but teach in English, according to the report.

Another Qatar-based Taliban official told AAN: ‘Taliban members and their families who live here [in Qatar] have strong demands for modern education and no one opposes it for either boys or girls – of any age.’

A daughter of one current Taliban minister, who was previously a member of the Leadership Shura in Quetta, said she is studying medicine at a Qatari university.

Two members of the Taliban’s Qatar office, who have since relocated to Kabul, said they didn’t know whether to bring their families to Afghanistan or wait due to the ‘interruption it would pose to the boys’ and girls’ schooling’.

One source told the report some officials are sending their daughters to schools in Pakistan that use Iqra teaching, which combines religious ‘madrasa’  learning with ‘modern’ schooling.

Describing the Iqra method, one official said: ‘The Iqra system is very good for Taleban who are looking to educate their boys and girls. It’s an Islamic educational system that teaches both modern school subjects and madrasa subjects.’

The hardline group ousted the US-backed government in August, promising a softer brand of rule than their repressive reign in the 1990s, when women were mostly banned from education and work. 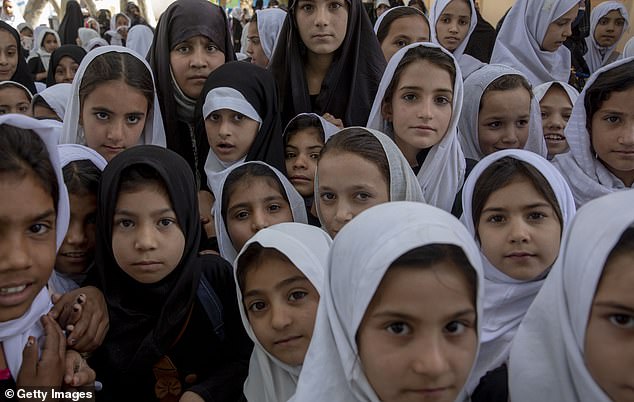 Millions of female secondary school students are still unable to go to school in Afghanistan. Pictured: Afghan girls in Farah, Afghanistan, on October 12

But the Taliban government has so far only reopened high schools for boys in most parts of Afghanistan, while millions of girls are still unable to attend school.

Primary schools have reopened in the country, with boys and girls mostly attending separate classes, and some women teachers returning to work.

The Taliban has made public pledges that all women and girls will be able to access schools at all levels when schools across the country reopen in March.

On September 17, the ministry of education ordered all male teachers and male students back to the classroom, but excluded girls from returning to secondary school.

‘All male teachers and students should attend their educational institutions,’ a statement said ahead of classes resuming.

Some private universities have since reopened, but in many cases female students have not been able to return to class.

But Shaikh Abdul Baqi Haqqani failed to specify whether female students would be able to return to their studies under the plans.

Universities in warmer provinces reopened from February 2, while those in colder areas will reopen on February 26, the minister told a news conference in Kabul.

In the past, Taliban officials have suggested that women could be taught in separate classes.

The international community have been applying pressure to the hardline Taliban, who took over Afghanistan on August 15, to get them to commit to upholding women’s rights.

Western governments have made education for female students a part of their demands as the Taliban seek more foreign aid and the unfreezing of overseas assets.

Since a US-led invasion ousted the Taliban in 2001, significant progress was made in girls’ education, with the number of schools tripling and female literacy nearly doubling to 30 per cent – however, the change was largely limited to the cities.

Afghan women have fought for and gained basic rights in the past 20 years, becoming lawmakers, judges, pilots and police officers.

Hundreds of thousands entered the workforce – a necessity in some cases as many women were widowed or now support invalid husbands as a result of decades of conflict.

Meanwhile, the UN says 8.7 million Afghans are on the brink of starvation, and Secretary-General Antonio Guterres said over half the population faces ‘extreme levels of hunger’.

‘More than 80% of the population relies on contaminated drinking water, and some families are selling their babies to purchase food,’ he said. 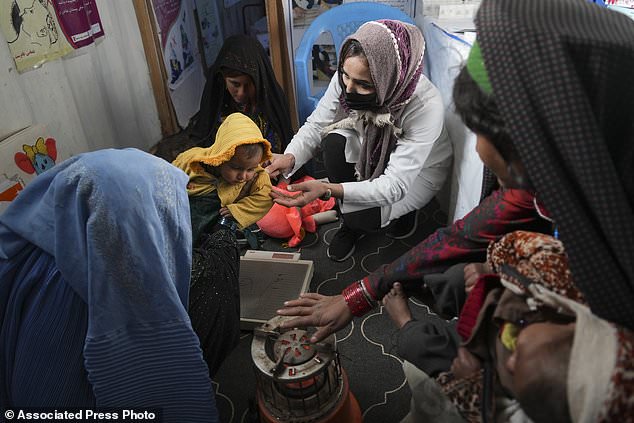 Meanwhile, half of the Afghan population are said to be facing famine in the coming months. Pictured: A nurse checks the weight of a child in the makeshift clinic near Herat, Afghanistan

Afghanistan’s aid-dependent economy was already stumbling when the Taliban seized power last August amid the chaotic departure of US and NATO troops after 20 years.

The international community froze Afghanistan’s assets abroad and halted economic support, unwilling to work with the Taliban, given the brutality during their 1996-2001 rule.

He said the remaining $1.2 million should be released urgently to help Afghans survive the winter.

‘Time is of the essence,’ Guterres told the Security Council last month. ‘Without action, lives will be lost, and despair and extremism will grow.’

Norway and its NATO allies do not formally recognise the Taliban-led administration that seized power last year, but see talks as a necessity, given the depth of the crisis.

Deborah Lyons noted that a joint communique from the talks highlighted that ‘understanding and joint cooperation are the only solutions to all the problems of Afghanistan.’ She said now the Taliban ‘must act on it’.

Norwegian Prime Minister Jonas Gahr Støre, whose country holds the Security Council presidency this month and chaired the meeting, said the Taliban delegation also held direct talks with representatives from Norway, the US, France and Britain, but he stressed that did not signify recognition of the Taliban government.

‘We have to talk to them, engage them and present very clear expectations, because Afghanistan is today facing a dire humanitarian crisis and a million children may starve,’ Støre said in an interview with The Associated Press.

He said there were no negotiations, no agreement signed, but the talks as far as he could see were ‘the beginning of something that can lead to something’.