Sleepy I am! Adorable two-month-old bush baby called Yoda clings onto his owner’s neck as he takes a snooze inside her T-shirt

The cuteness is strong with this one, as an adorable bush baby takes a nap inside his owner’s t-shirt.

The two-month-old named Yoda found a comfortable sleeping spot when he felt it was time for a snooze.

The little creature, known as a galago or colloquially as a bush baby, was in a car in Bangkok when he got up close and personal with his owner, crawling into her t-shirt.

Yoda took advantage of the air-conditioned car ride and took a quick nap en route to the next destination.

Gripping onto her back with his tiny feet, Yoda snuggled up under the grey t-shirt and closed his drooping eyes.

He than looked directly into the camera as if to pose for a few seconds before going back to sleep. 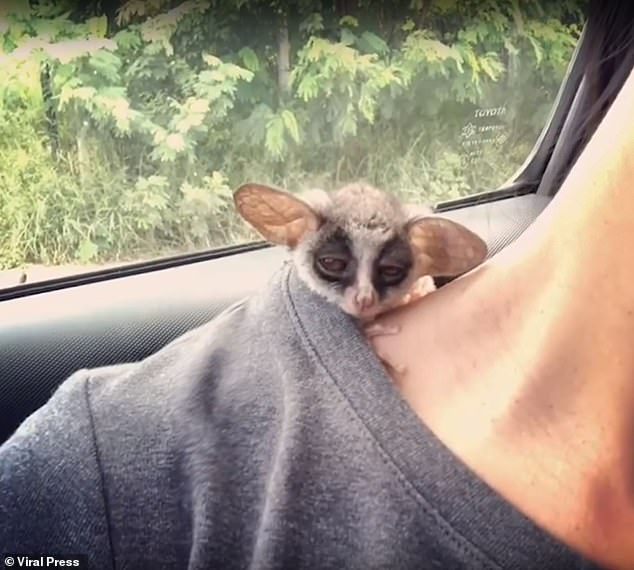 What is a bush baby?

A galago or bush baby is a commonly found in East Africa as well as woodlands and bushlands in sub-Saharan Africa.

Most often, they live in tree hollows that provide shelter. Sometimes, they construct nests in the forks of branches, but these are not as commonly used as are natural holes.

They have large, round eyes for good night vision and bat-like, delicate ears that enable them to track insect prey in the dark. As they jump through thorn bush or thick growth, they fold the ears flat against their heads to protect them. They fold them during rest, too.

Despite their small size, the bush baby produces loud, shrill cries surprisingly like those of a human baby. Aside from these baby-like cries, they make croaking, chattering, and clucking sounds or shrill whistles in case of danger.