Beijing: A former lawyer detained for more than six months due to reporting on the coronavirus outbreak in Wuhan has been fitted with a tube so she can be force-fed after she went on hunger strike, her lawyer said.

Zhang Zhan, 37, was apparently unable to pull the tube out as her arms were restrained. She was arrested in May and accused of "picking quarrels and stirring up trouble", a charge often used against government critics and activists in China.

Ms Zhang attempted to report the virus outbreak on social media and a streaming account. She is now being held at a detention centre near Shanghai. She was formally charged with spreading false information in November. Her lawyer, Zhang Keke detailed her deteriorating condition in a blog post after visiting her. 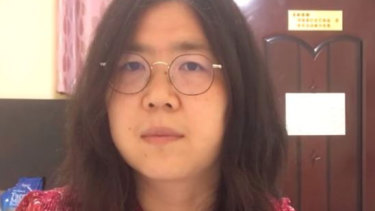 "She was wearing thick pyjamas with a girdle around the waist, her left hand pinned in front and right hand pinned behind," he wrote.

"She said she had a stomach tube inserted recently and because she wanted to pull it out, she was restrained.

"In addition to headache, dizziness and stomach pain, there was also pain in her mouth and throat. She said this may be inflammation due to the insertion of a gastric tube."

He added that she said she had expected to go to court in December, but that the appearance had been cancelled and she didn't know how she was going to survive.

Ms Zhang refused to stop the hunger strike even after her lawyer told her that her family and loved ones urged her to put an end to it.

It is not the first time that Ms Zhang has been arrested on such charges. She was detained once in 2018 by Chinese authorities and again in 2019 for voicing support for Hong Kong activists.

Ms Zhang has denied the allegation of falsifying information, and has told her lawyer that she gathered the information on the ground through interviews with Wuhan residents.

Several Chinese citizen journalists were arrested and silenced after travelling to Wuhan to report on the virus outbreak and response.

Chen Qiushui was among the first to be detained in January and disappeared after he broadcast live on social media showing scenes of crowded hospitals.

Li Zehua, who travelled to Wuhan, went missing in early February and was released in April.

Ms Zhang posted videos on YouTube – which is banned in China – consistently from February until her arrest in May. In one video posted in February, she told of visiting hospitals in Wuhan, and said that the number of infected patients was higher than the government figures.