Real estate entrepreneur Antony Catalano has lashed out at the media union and journalists at his newspapers including The Canberra Times after they laid the groundwork for strikes in response to plans to freeze their pay.

Mr Catalano in 2019 acquired regional publisher Australian Community Media, which also owns the Newcastle Herald and Illawarra Mercury, from Nine Entertainment Co, the owner of this masthead. The papers’ pay agreements expired in June last year and talks have been ongoing since October to renew them. 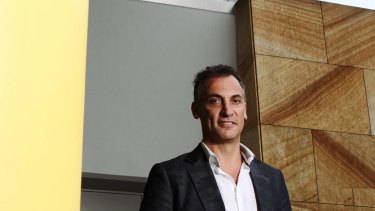 Adam Portelli, an official with the Media, Entertainment and Arts Alliance, said staff at the papers had worked exceptionally hard to keep readers informed during the coronavirus pandemic. “Management has so far refused to commit to any pay rise in 2020 or 2021, and wants to make cuts to agreement conditions which would effectively create a two-tiered workforce,” Mr Portelli said.

“Members are seeking a dignified agreement – one with fair pay increases which maintains real wages and protects current terms and conditions for all.”

But Mr Catalano, ACM’s executive chairman, described the demands as “delusional”. He said the union had requested a 3 per cent annual pay rise and wanted to keep outdated provisions from the papers’ pre-Nine owner, Fairfax, when the business would not have survived without JobKeeper.

“This log of claims is completely out of touch with reality,” Mr Catalano said. “And if they want to take strike action they’ll discover the hard way we won’t buckle to claims that threaten the viability of the business and put at risk not just the future of 600 journalists in the organisation but the other 1000 employees across the business.”

Mr Catalano said the two sides had met repeatedly and agreed on 25 separate issues but branded the union’s remaining demands “outrageous”. “If they want a fight, they’ll get one,” Mr Catalano said.

The Fair Work Commission approved a union request on Monday for a ballot to approve the option of one day, two day, and indefinite strikes at times that have not been set.

Unions typically do not request strike ballots without being confident they will be approved by members, but strikes that are approved do not always actually occur.

“Following the outcome of the ballot, members will then decide on a further course of action,” Mr Portelli said.

The union says it had not yet decided on a specific percentage pay demand. Minimum wage workers were handed a 2.5 per cent pay rise this year by the nation’s independent pay panel.

The company has since made several major structural changes in an attempt to build a modern media company. Part of these changes involved the permanent closure of several print centres and a major property sale spree, which has returned at least $26 million so far with 11 more locations under review that could be sold for an estimated $50 million total.

“Scores of people across the business took pay cuts last year to support the organisation though the pandemic,” Mr Catalano said. “Not one journalist role in ACM was lost through the process and in fact we hired more journalists, re-instated our Canberra political bureau and launched new publications.”

Other major news outlets, including News Corp (owner of The Australian, The Daily Telegraph and The Herald Sun), and Guardian Australia, are also bargaining with their staff over pay deals.