During early IVF treatment, Shelby Hill figured her colleagues knew something was up, thanks to her hormone injections.

“Working in the office (pre-pandemic) it was pretty obvious something was happening,” she said. “I was very emotional, people would see me crying in the meeting room … it was like, ‘what is going on?’” 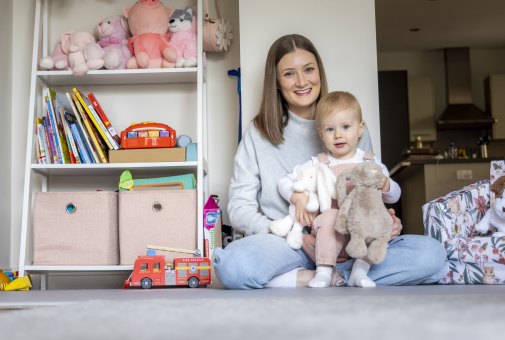 Shelby Hill knew her colleagues probably suspected something was up when she was having fertility treatment before the conception of daughter, Harper, so she told them.Credit:Wayne Taylor

“I was having lots of appointments, constantly out of the office, coming in late or sneaking off early for whatever [the next procedure] was.”

When Hill and husband Cameron learned they needed fertility treatment, she did what many women feel they must: kept quiet about it at work.

She turned to Instagram, searching for IVF hashtags and accounts for people going through what can be a notoriously stressful process.

“I found a bit of a community on there and started sharing my infertility and IVF journey. I feel like I got some confidence there,” said Hill, who is now pregnant with her second IVF-assisted baby.

“Then I felt more comfortable sharing with everyone … I told my direct managers and my wider team.”

Once she disclosed her treatment to colleagues at the consultancy she works for, Hill was encouraged by how supportive they were.

“It was like a weight was lifted off my shoulders. You just felt like you could be yourself and just cry when you needed to cry. You weren’t needing to hide it,” she said.

“An older man in my team actually reached out to me and said, ‘I can understand what you’re going through because my wife and I did IVF 30 years ago’. He had kept it to himself and is the kind of person I never knew would have been through something like that.”

“He could understand the stress that comes along with IVF.”

Less than 10 per cent of IVF patients feel comfortable disclosing their treatment at work, a poll of 500 women aged between 28 and 42 by provider Monash IVF found – and this is a five percentage point improvement on the previous survey in 2020.

The 2022 survey found 97 per cent of women shared their struggles conceiving with someone they knew, including 78 per cent confiding in their partner, 73 per cent in their GP and roughly half telling family and/or friends. But only 9 per cent said they would confide in a colleague.

Many women remain concerned that speaking about their intention to conceive will have consequences for their work, said Kate Stern, associate professor of obstetrics and gynaecology at the University of Melbourne.

“We hope that stigma is going, but still in a lot of workplaces the perception is there will be prejudice against [patients’] career promotion,” she said.

Monash IVF specialist Dr Alon Talmor said that while people were more comfortable discussing IVF in general and social media had reduced some stigma, it remained a taboo topic for many in their professional environment.

“While we still have a long way to go in the workplace, I think, generally as a society, we are moving in the right direction,” he said.

“More and more women are talking about IVF, egg freezing, surrogacy and other aspects of fertility on social media and through the media.

“We also see celebrities talking about their experience and sharing photos and advice, and that also empowers women.”

Talmor said one in six couples struggled to conceive and increasing numbers of single women and same-sex couples were using donor services, so “chances are, someone in your workplace is having treatment”.

Obstetrician Scott Shemer, of Frances Perry House at the Royal Women’s Hospital, said while more patients such as Hill gained support on the pages of social media “fertility warriors”, discussing it at work remained difficult for many.

“As soon as you tell your employer you’re going through IVF, you make it very clear you have the intention of being pregnant … I still hear from people really nervous to tell their employer they are pregnant and saying, ‘I hope it doesn’t mean I’m going to be overlooked for positions’.”

Fertility treatment can take between a few months and about five years for some patients and the research shows fears for job security or career progression are common.

Talmor said some employers, including Spotify, had already introduced IVF leave, an acknowledgment there were flow-on benefits for workplace productivity to gain by supporting women going through their treatment.