After weeks of hearings and months of deliberation, the COVID-19 hotel quarantine inquiry has finally released its full report. While retired judge Jennifer Coate, who headed the probe, is understanding of how daunting a task it was to stand up the program in just 36 hours, her judgment of the Andrews government's performance pulls no punches in taking aim at the buckpassing, the bureaucratic disarray and the lack of political oversight that led to Victoria's second wave.

At the heart of the report is a detailed account of what took place once the decision had been made by national cabinet on March 27 to implement mandatory hotel quarantine in each state for every person entering the country. Without any blueprint or pre-planning, each state was left to work out the logistics themselves. 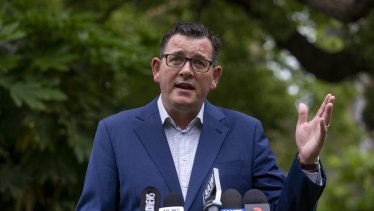 The program was kicked off in Victoria when the state's then top public servant, Chris Eccles, left the national cabinet meeting early to call on Simon Phemister, the secretary of the Jobs Department, to start finding hotels and muster people to organise the logistics. Mr Phemister took this call to mean his department was in charge of the whole operation.

And yet by the following day, Mr Eccles informed Mr Phemister that the Health Department would be the lead agency in the program. While this was fundamentally the right decision, that initial confusion about who was in charge was to haunt the program until it was suspended during the second wave.

For while the Health Department became the lead agency, and did take charge of some of the operations, it continued to leave the hiring and oversight of the security guards, cleaning and catering to the Jobs Department, a role it did not have the expertise to manage. This shared role left the program with myriad lines of responsibility and accountability that created no shortage of opportunity to avoid blame when the operation failed. Justice Coate called it a Gordian knot.

If survival of this virus is the sole measure of the quality of political decision-making, then Victoria is pretty well governed. Premier Daniel Andrews has done a lot right, and he certainly hasn't lacked for popularity, despite the botched hotel program and the long, hard lockdown we endured to wrestle this virus to the ground.

But none of that should absolve the state government of its mistakes in the setting up and running of the program. It's too simplistic to say they are to blame for the 800 deaths (the majority of which happened in nursing homes, which are largely a federal responsibility). But the litany of errors, the lack of planning, the failure by ministers to demand briefings or take responsibility and the turf-war between agencies should rest heavy on the shoulders of the Premier.

That responsibility goes deeper too. Labor has been in government for 16 of the past 20 years and has overseen a health system that has been poorly funded, mismanaged and, in its public health response at least, exposed as unfit for the task. The government knew that to be case at the start of the pandemic and did not respond quickly enough to shore up the system. With that in mind, the Premier appears to have gotten off lightly in the report.

Mr Andrews has apologised and expressed regret for the emotional and financial toll the second lockdown took on so many. But he should spend the summer thinking about whether there is anything that he needs to learn from this debacle to shape his leadership of the state. The Age has never supported calls for his resignation, but the hotel quarantine episode will forever be a stain on his handling of what will no doubt be seen by history as one of the state's most challenging years.

Note from the Editor