Washington: They shared an intimate double date, where the offerings included two scoops of ice cream. When they greeted each other outside the White House for a state visit on Thursday, the December chill had little effect, President Joe Biden said, because “our hearts are warm”. French President Emmanuel Macron returned the love by calling Biden “Cher Joe”.

Even for two reliably effusive leaders, this really was laying it on thick.

Biden told reporters the reason for hosting Macron for his first state visit as president was simple: “because he’s my friend”. 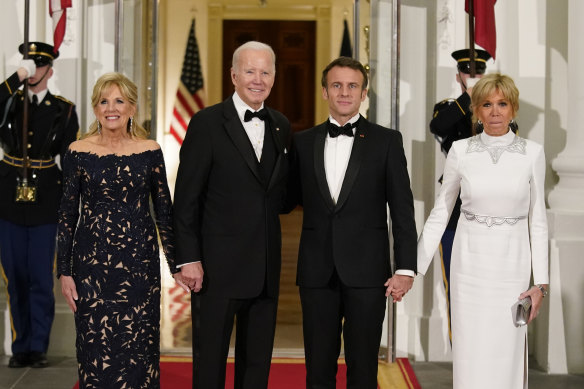 President Joe Biden and first lady Jill Biden greet French President Emmanuel Macron and his wife Brigitte Macron as they arrive for a state dinner at the White House in Washington on December 1.Credit:AP

But there is strategy underneath all of that syrup. For all the tools at an American president’s disposal, a state visit – which usually consists of a day-long diplomatic obstacle course followed by a lavish, let-loose dinner – is the one meant to test just how far flattery can take him.

Although the two leaders spent two days making much of their friendship – and there is evidence that they are actually fond of each other – the friendly showing is going to test Biden’s ability to keep a key ally at his side as he pushes for an enduring hard line against Russian President Vladimir Putin as his invasion of Ukraine continues.

Biden said he would talk to Putin, but only in consultation with NATO allies and only if the Russian leader indicated he was “looking for a way to end the war”. 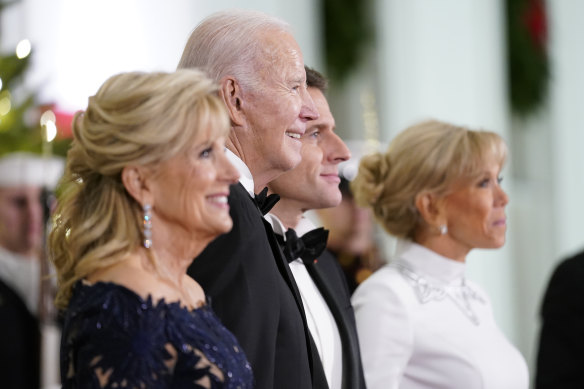 Double date: The Bidens and the Macrons at the White House for Joe Biden’s first state dinner as president.Credit:AP

Biden’s public expression of conditioned willingness to reach out to Putin gratified French officials and provided unexpected support for Macron’s outreach. Biden noted that Putin had shown no interest yet in ending his invasion, but said that if that changed, “I’ll be happy to sit down with Putin to see what he has in mind”.

Evidently determined to present a united front, Macron said that France would increase its military support for Ukraine and “will never urge Ukrainians to make a compromise that will not be acceptable for them”.

In effect, the two leaders met each other halfway, with Biden showing more openness to a negotiated settlement and Macron more unequivocal support for the Ukrainian cause. If partially choreographed, the meeting of minds appeared to exceed expectations on both sides.

The two leaders emerged from the Oval Office with an agreement to continue supporting Ukraine’s efforts to beat back Russian forces.

“We’re going to stand together against this brutality,” Biden said. 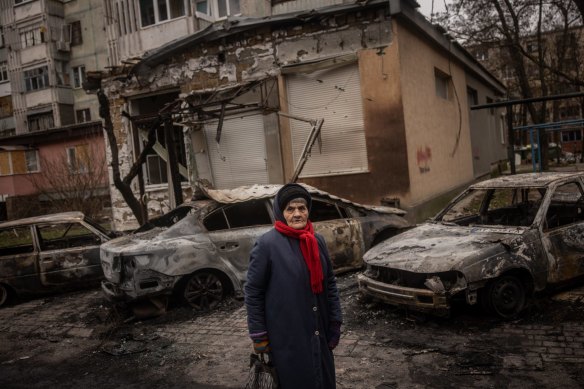 An elderly woman looks at damage caused by overnight Russian shelling of a residential building in Kherson, Ukraine, on December 1.Credit:Getty

They spent about 30 minutes together and then participated in a 90-minute bilateral session, according to a senior administration official, who spoke on the condition of anonymity to detail private interactions.

The official said the rapport the two share is “genuine” and their bond has been forged by about 30 phone calls since Biden became president, multiple in-person interactions and warm correspondence – Macron sent a handwritten letter to wish Biden a happy 80th birthday last month. 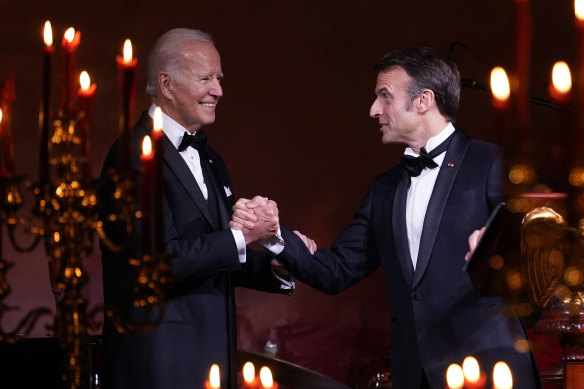 President Joe Biden and French President Emmanuel Macron shake hands before a toast during a state dinner at the White House.Credit:AP

Their appearance was a more unified – and ultimately more pragmatic – compared with Macron’s last state visit, when he was hosted by then-president Donald Trump in 2018. During that visit, which at first appeared to be similarly heavy on the platitudes, the two men planted kisses on each other’s cheeks and held hands in front of photographers.

“I like him a lot,” Trump said as the two gave each other a peck. In the Oval Office, Trump gently brushed what he said was dandruff off Macron’s shoulder. “We have to make him perfect,” Trump said. “He is perfect.”

Moments later, as they sat side by side, Macron placed his hand on Trump’s knee.

Theirs was not an enduring bond. As Gérard Araud, France’s former ambassador to the United States, recently said on Twitter, Macron focused on placating the president “because Trump is the most powerful guy on earth”.

“Most presidents tend to exaggerate the significance of personal relationships,” said Richard Haass, president of the Council on Foreign Relations. “Personal connections can decrease the odds differences become crises – but all the personal chemistry in the world cannot turn differences into agreements.”

By contrast, Macron, 44, and Biden seem to enjoy each other’s company. They saw each other only a few weeks ago at the G20 summit in Bali, Indonesia.

During one event, where they planted baby mangroves and toured a mangrove farm, the two stayed close to each other, talking intently as other leaders examined the plants. At one point, they were asked if they had any reaction to Trump announcing a run for the presidency in 2024. The two looked at each other and shared the faintest of smiles.

“No, not really,” Biden said, before they continued on their tour.

In September, when they met in New York on the sidelines of the General Assembly of the United Nations, their discussion, originally scheduled for 10 to 15 minutes, stretched to almost an hour.

The pair is not particularly opposed in their worldviews, but Macron and Biden have engaged in an explosive quarrel. There was the scuttling of a nuclear-powered submarine deal, which led France to pull its ambassador from Washington. (“Trust is like love; declarations are good, but proof is better,” Macron said last year when Biden admitted to committing an act of clumsy diplomacy.)

They also do not agree on Macron’s so-called strategic autonomy plan to make Europe less dependent on the US military, nor do they see eye to eye on Biden’s plans to offer preferential treatment to American automakers that make electric vehicles.

And so there was perhaps a whiff of scepticism that the “bromance” could endure. 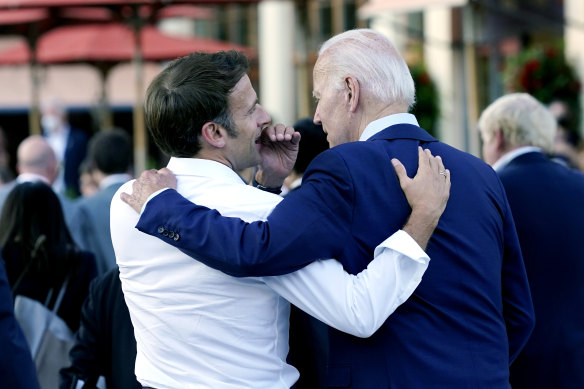 Emmanuel Macron whispers to Joe Biden after their working dinner at the G7 in June.Credit:AP

Towards the end of a news conference, the two men were asked by a journalist about a common French saying, which translates roughly to “There is no love, only proofs of love”.

“Do you feel that your French friend will go home very much reassured,” the reporter asked.

Macron delivered a lengthy soliloquy in French, telling the reporter that love did not have as much to do with their agreements as strategy and clarity would in future.