A private group of conservative Victorians has put together a fighting fund of almost $500,000 to sue the Andrews government for negligence over its bungled hotel quarantine program.

Two lawyers who successfully represented player Israel Folau against Rugby Australia have been hired to lead the charge.

The group has chosen to remain secret out of concern for the sensitivities of taking on the state government in a high-profile dispute. 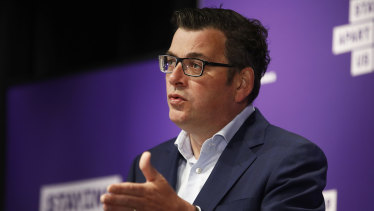 Mr Wood is a member of the Victorian Liberal Party and a prominent advocate for free speech and conservative causes.

He and Mr Haros helped secure an estimated $3 million payout for Folau in his unfair dismissal battle with Rugby Australia.

Victorian Chamber of Commerce and Industry chief executive Paul Guerra said the case would be relevant to businesses and employees across the state.

‘‘Our focus is on getting business back to work, but I am sure our members will watch this case with interest,’’ Mr Guerra said.

The case represents the next instalment in a wave of legal action to be filed against the Victorian government over its handling of the pandemic, hotel quarantine and the financial and social consequences of the extended lockdown.

The state opposition was quick to throw its support behind the action, which comes at the same time as Liberal preselection hopeful Michelle Loielo is suing the government in the Supreme Court over its now-defunct curfew.

‘‘With arguably the longest and harshest public health restrictions anywhere in the world as a result of Labor’s hotel quarantine program fiasco, it’s no surprise that Victorians who have lost so much are now looking to hold Daniel Andrews and his shambolic government accountable,’’ opposition legal affairs spokesman Ed O’Donohue said.

Mornington cafe owner Ms Loielo, 41, appeared over video link in the Supreme Court again yesterday in her case challenging the legality of the evening curfew, which was scrapped on Monday.

Lawyers representing Health Department officials continued to argue there is no longer any reason to declare the curfew unlawful, because the matter is now academic.

But lawyers representing Ms Loielo told the court her claim remained important because the government has the power to reinstate a curfew at any time.

One of her barristers, Dr Jason Harkess, said his client feared the government might reinstate restrictions at any moment and that it was of little comfort to her that they had been eased.
“Ms Loielo’s rights can be taken away by a second curfew as quickly as they were given back,’’ he said.

There are other legal matters under way taking aim at the government over the effects of the lockdown on business and employment.

Workers who have lost their jobs during the second round of coronavirus restrictions have mounted a class action against the government. Lawyer Tony Carbone, of Carbone Lawyers, is representing a 21-year-old worker who was made redundant from his roadside assistance job.

The Wood and Haros action is expected to focus on business owners who have been unable to operate during the second lockdown, particularly in Melbourne’s CBD.

It is believed the action focuses on non-essential businesses such as retailers, restaurants and other hospitality business owners.