Shocking video shows the moment 134 dehydrated Central American migrants, including 71 CHILDREN, are rescued gasping for air from a truck abandoned by traffickers in Mexico

Recently released footage shows the moment more than a hundred dehydrated Central American migrants were freed from an abandoned truck and cared for by authorities in Mexico last week.

Residents in Ozuluama, a city in the Mexican Gulf Coast state of Veracruz, heard desperate cries coming from the back of a tractor trailer on June 27.

Military and local cops were alerted and they pried open the gate after the vehicle had been left stranded for more than three hours on Federal Highway 180 near a police station. 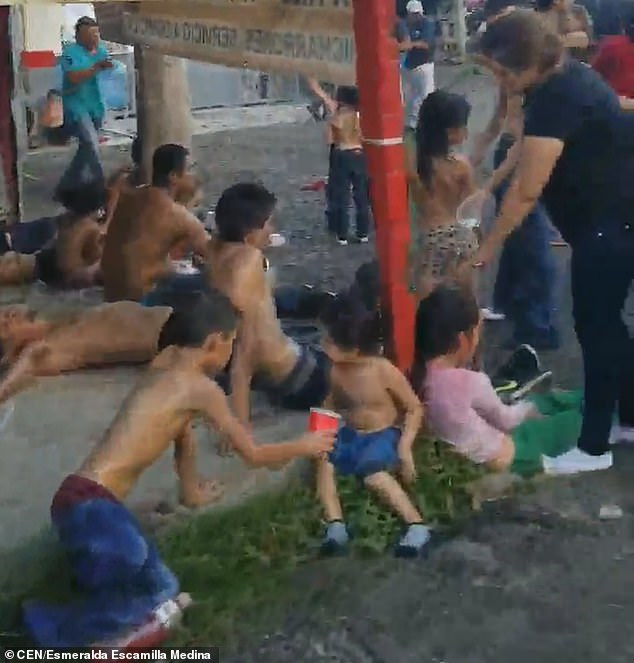 Mexican military soldiers and police soldiers saved 134 Central Americas who were left stranded in a truck June 27 in the Gulf Coast state of Veracruz. A young boy (lower left) hands a beverage to a child (lower center) 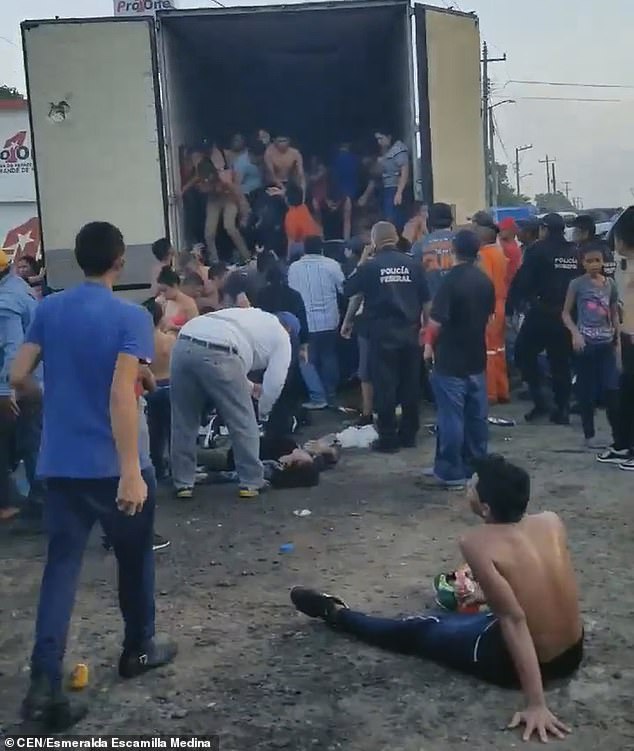 Migrants (pictured) flee a tractor trailer after they were left abandoned on a highway in Veracruz, Mexico, on June 27

Authorities provided medical attention to 134 migrants, including 71 children, who were showing signs of dehydration and minor injuries, according to the National Migration Institute.

Shirtless migrants are seen in the video helping each other jump from the trailer. According to reports, they had tried to break the gate’s locks from inside.

About a dozen children can also be seen in the grim video sitting under a canopy, gasping for air.

One of the children appears to assist another boy by handing him a cup with a beverage to cool him down. 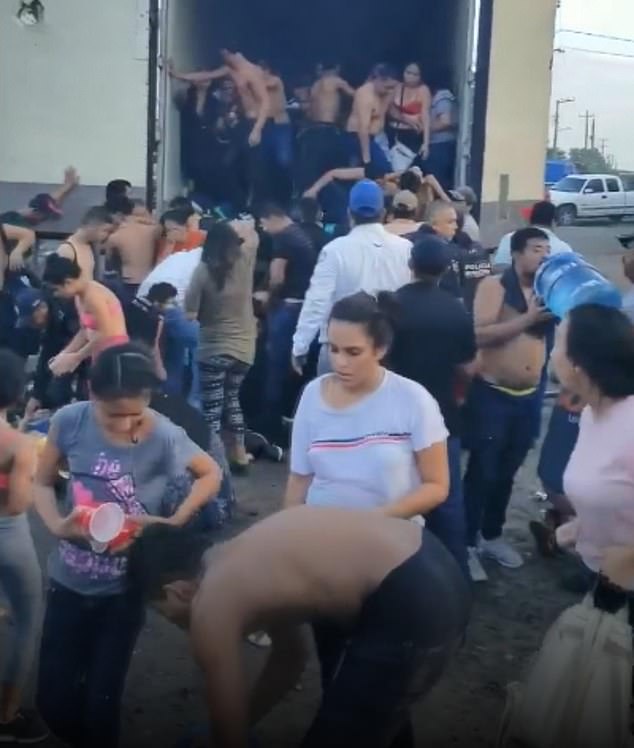 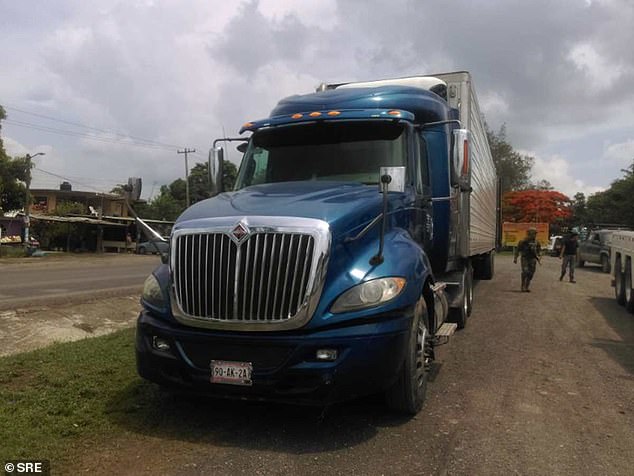 A truck (pictured) was abandoned near a police station in Veracruz, Mexico, on June 27 with 134 Central American migrants, including 71 children, locked inside 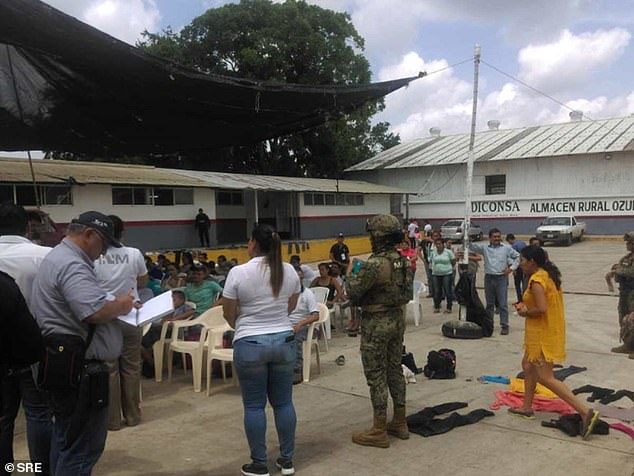 A group of 134 Central American migrants were found inside a locked truck on June 27 in Mexico. The country has served as a passageway for refugees who’ve abandoned their homes in Central American and are seeking asylum from the United States

The undocumented immigrants were nationals from El Salvador, Honduras and Guatemala. Their final destination was reportedly the United States, however the truck operator ditched them. It is not reported why.

Local outlets said that some of the migrants escaped from the scene although the National Migration System didn’t confirm or deny this.

Mexico has served as the passageway for migrants seeking asylum at its northern border with the US.

In May, a group of 142 migrants from Guatemala were also rescued after they were left abandoned inside a truck in the same town.

The Mexican government has been tasked by the Trump administration to stop the flow of refugees from Central American as well as Africa and Haiti by assigning 6,000 troops of its newly-formed National Guard.

Mexico announced last week that it had dispatched an additional 15,000 National Guardsmen to guard the 1,954 miles of borderland with the US to stop migrants from illegally crossing. 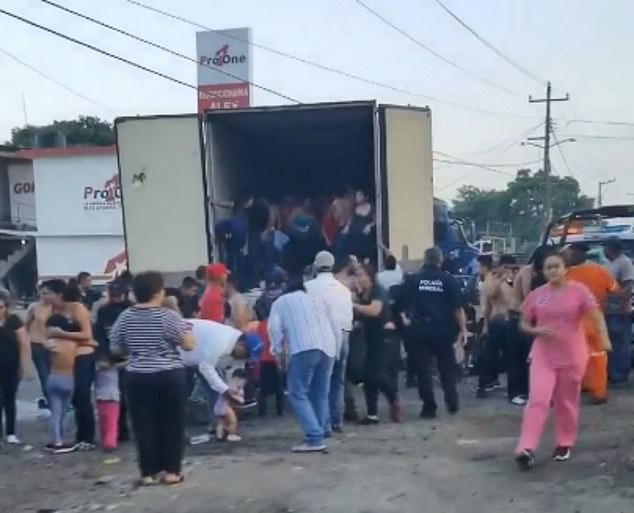 Some 134 migrants, including 71 children,  from El Salvador, Honduras and Guatemala were rescued from a truck in Veracruz, Mexico, last week 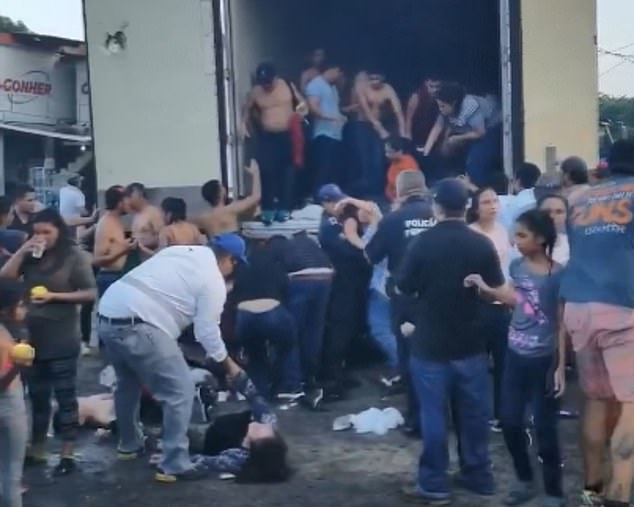 A man  (lower left) comes to the aid of a woman who was lying on the ground outside a truck after its gates were pried opened, allowing 134 migrants from Central America to exit an abandoned tractor trailer in Veracruz, Mexico, last Thursday