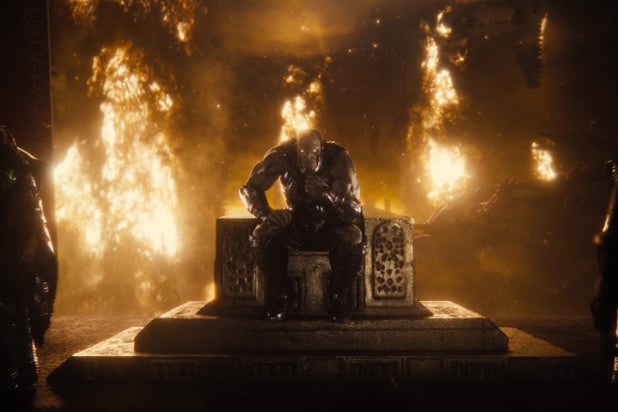 The plot of “Zack Snyder’s Justice League” is pretty much the same as it was in Joss Whedon’s cut released theatrically back in 2017. There are differences in how they go about things, and of course the Snyder Cut is twice as long as Whedon’s. But the overall arcs go to the same places.

Perhaps the detail that was changed the most was the whole deal with the villains. In the theatrical “Justice League,” Steppenwolf is just a generic big boss guy who’s just trying to dominate the world because he likes doing things like that. But in “Zack Snyder’s Justice League,” he’s doing it to try to get back into the good graces of the biggest bad in the universe, Darkseid.

Darkseid had attacked Earth in the distant past, back before the Atlanteans lived under the ocean. All the people of Earth, including a Green Lantern, fought off Darkseid in an epic battle that we see quite a bit more of than we did in the theatrical cut. In that version, Steppenwolf was the one doing the invading, but here it’s Darkseid instead.

Darkseid attacked Earth because he wanted something that could only be found there: The Anti-Life Equation. We actually see it during the battle — it’s the elaborate formation of molten earth underneath where Darkseid’s spaceship lands.

The rest of the story with Darkseid in “Zack Snyder’s Justice League” doesn’t really make much sense. After he was defeated back in the ancient past, he flew off back into space and apparently forgot all about Earth, spending the next several thousand years trying to find the location of the Anti-Life Equation, something he already found. Until Steppenwolf shows up, tries to conquer Earth, learns that the Anti-Life Equation is there, and reports back to his old boss in hopes of redeeming himself.

Let’s not worry about the particulars of what happened with Darkseid that made him just not know about a place he had already visited. There’s nothing in the movies or comics that explains what that’s all about, so we can’t worry about it too much right now.

Being what amounts to a cosmic fascist, Darkseid wants to bring the entire universe under his control, and that’s why he’s obsessed with finding the Anti-Life Equation.

According to DC Comics lore, Darkseid first became aware of it 300 years in the past, when he learned about the Martian philosophy of free will, which they expressed as the “Life Equation.” Darkseid extrapolated that the opposite must also be provable, and ever since has attempted to discover it.

Created by the legendary Jack Kirby in 1971, the Anti-Life Equation “proves,” mathematically, that freedom is a lie, hope doesn’t exist, and life itself is pointless. Essentially, it works like a mental computer virus: Whoever knows it can speak it directly into the minds of any sentient being, shattering their free will and sense of self and enslaving them.

Basically, it’s a formula for mind control of any being in the universe.

As explained in the 5th issue of Kirby’s “Forever People,” the name comes from the fact that it’s “the very opposite of living! If someone possesses absolute control over you — you’re not really alive.” 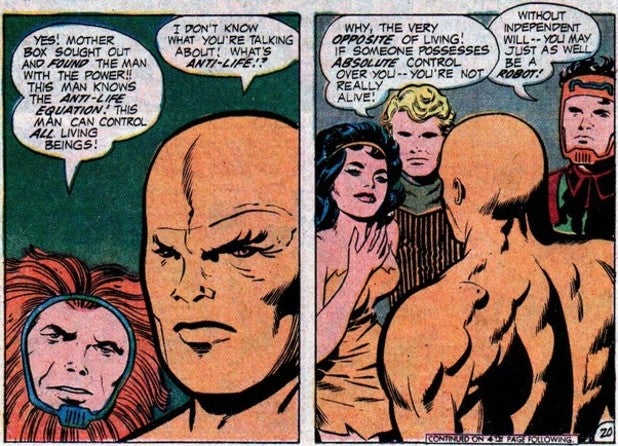 This was further summed up in the 2005 miniseries “Seven Soldiers: Mister Miracle,” by Grant Morrison, which describes the Anti-Life Equation as a literal formula. Below you can see that formula, recited by Mr. Miracle as he tries to resist its control. 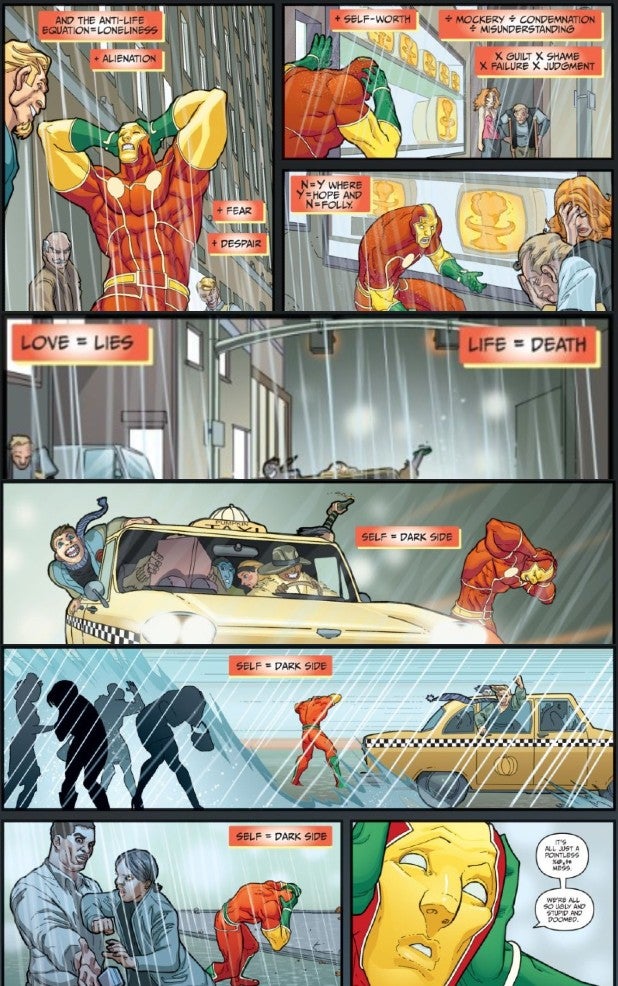 In recent years, DC Comics has added some additional powers to the Anti-Life Equation, including the ability to bring the dead back to life, and its apparent existence as an independent, sentient being. But it remains primarily a means of controlling the universe for whomever can learn of it.

Incidentally, it also has connections to some of the bigger crossover events DC has done — including 2009’s “Final Crisis,” in which Darkseid finally learned it and almost destroyed the universe. But in current continuity, Darkseid is still looking for it. Sorry big guy.

Darkseid’s quest for the Anti-life Equation was originally part of Snyder’s plan for the future of at least his DCEU movies. “Justice League” was originally planned as a two-parter, but that didn’t work out — at some point after “Batman v Superman,” Warner Bros just kinda stopped talking about the second one. And, obviously, it never happened.

At the end of “Zack Snyder’s Justice League” Darkseid mentions they’re gonna have to use “the old ways” of travel to get to Earth after Steppenwolf was killed by Aquaman and Wonder Woman. Presumably the second “Justice League” movie would have been about that fight, or move us toward it at least.

But it’s not likely we’ll ever find out how this would have played it.