Let’s be real – there are a lot of characters in 13 Reasons Why, and a lot of things that happened to them over the course of season two. Before you head into your season three binge, there are a few key characters you’ll want to refresh your memory on, and the most significant of all might be Tyler Down (Devin Druid). Here’s a quick rundown of exactly where we left off.

Having long been an outcast with vaguely creepy tendencies (remember those covert photos he took of Hannah without her consent?), Tyler seemed to be heading in an even darker direction throughout much of season two after befriending Cyrus, a cynical rebel who loved eyeliner almost as much as he hated authority. The pair decided to take their revenge on the bullies and jocks of Liberty High by vandalizing the football field, which got Tyler sent to a behavorial rehabilitation program.

After returning from the program, Tyler seems to have turned over a new leaf… but not for long. Monty, who’d long hated Tyler and held him responsible for Liberty HIgh’s sports program being suspended, accosted him in the school bathroom and sexually assaulted him with a mop handle in a graphic and controversial scene. 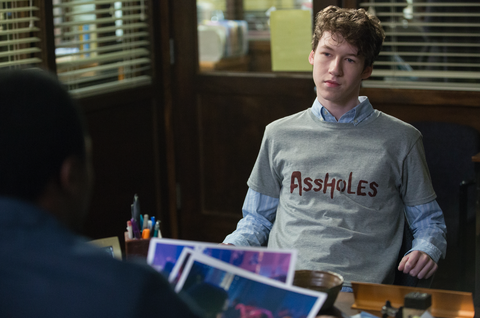 This horrific act pushed Tyler over the edge he’d long been teetering on, and in the closing moments of the finale he showed up to the Liberty High Spring Fling with a loaded assault rifle. Thankfully, though, he also texted Mackenzie to warn her, and the advance warning gave Clay and the gang enough time to come up with a plan. Clay intercepted Tyler right outside the school and successfully talked him down, after which Tony rolled up in his car to whisk Tyler away just before the cops arrived.