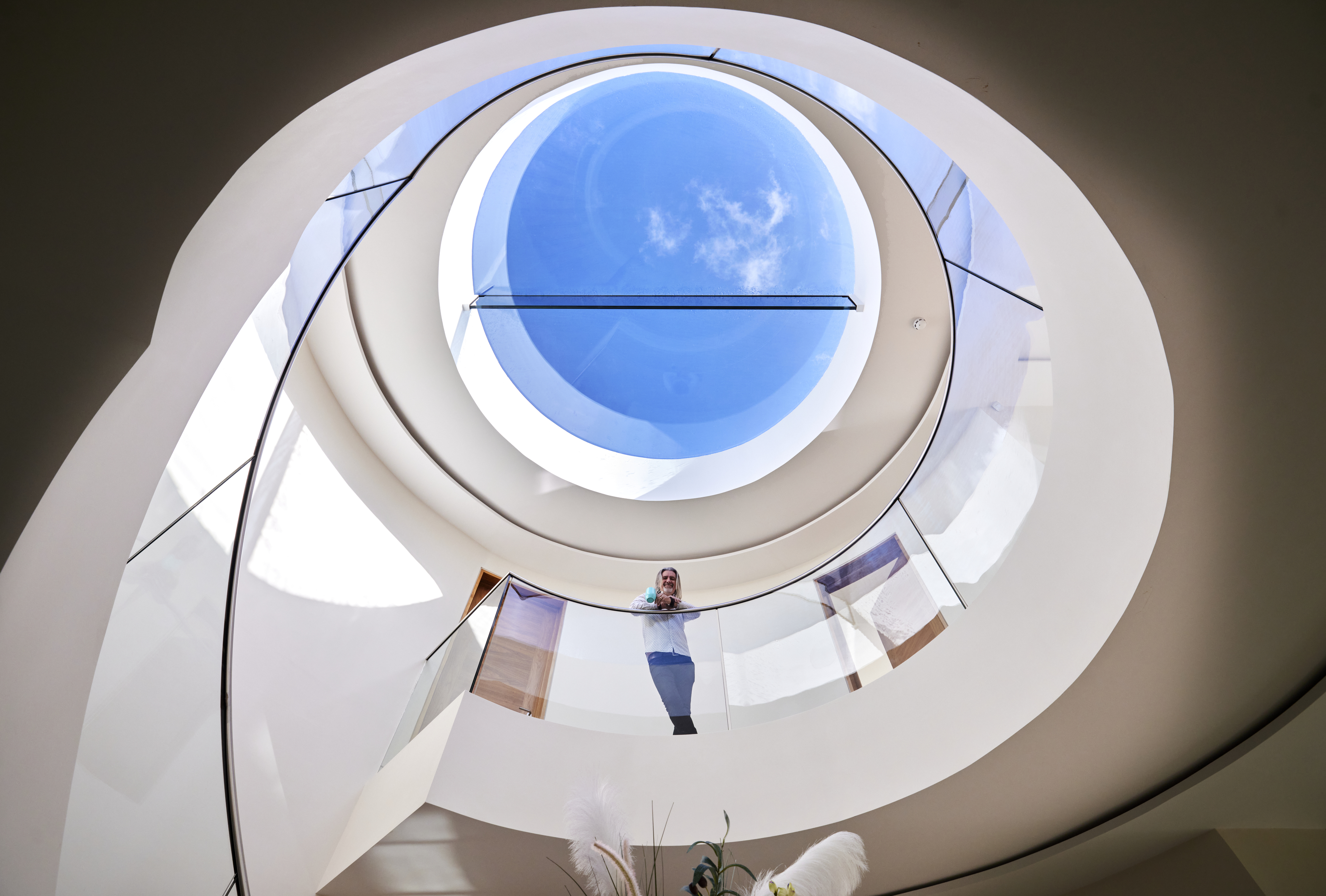 When David Dootson was dreaming up his own home, however, his long career as a top video-game developer was the driving force.

‘I drew on those skills of visualising space, creating a sense of excitement and always being one step ahead,’ he says. ‘I live for all things tech, so created a minutely detailed 3D model, from the outside in, and presented it to my architects so they could draw up plans and get it built.’

David’s vision, for which he used software SketchUp, was for a 10,300sq ft largely glass, ultra-contemporary mansion, in Over Alderley, about 17 miles from central Manchester. The main player in this home-build odyssey, with a majestic, curved elevation, five bedrooms, eight bathrooms and four receptions, it also had an equally important backstory – 16 acres of lush rural Cheshire.

‘I had been living in Wilmslow, in a 1930s house, but had always had a hankering to create something really modern,’ says David, who made his name creating boundary-busting Lego games and Transformers for PlayStation at TT Games.

‘I was struggling to find a plot, so took long drives in the countryside around Manchester, exploring back roads. I had spotted this site and admired it, so when it came up for sale, I knew this was it. The 270-degree panoramic views to the Cheshire Plain and hills beyond was so awe-inspiring, the design came naturally to me.’

In 2013, with a budget beyond most self-builders, David bought the site – which came with an old, dark, low-ceilinged farmhouse – for about £2.1million. It was a highly risky move, however, as it didn’t come with planning permission for demolishing the existing site and building a new house. ‘I suppose I thought I could knock the old farmhouse around a bit and extend it if necessary, but I knew it would be a huge compromise,’ he says.

Incredibly, the plans, drawn up by Altrincham and Brighton-based architecture firm Pozzoni, proved an instant hit. ‘For what could have been a really contentious project, I received the go-ahead from Cheshire East Council within eight weeks,’ David says, ‘although a few tweaks were later made, such as removing an impractical spiral staircase on the exterior of the home. This meant submitting plans all over again.’

The fact that David was prepared to spend £5million on the build and interiors, only using the finest materials, could well have helped sway the planners this was to be a high-end project. By the summer of 2014, then, construction had begun – but for David, who had no experience building a home, the stress had set in.

‘I really enjoyed the design process, as I have always loved problem solving,’ says David, whose father bought him a Commodore VIC-20, an early home computer, in the 1980s, inspiring in him a love of programming and gaming.

‘Watching the steel frame go up over 23 concrete columns that reach down to the bedrock, and seeing the outline and beautiful curve of the home become reality, was awe-inspiring.’

However, with scores of sub-contractors to manage he soon felt overwhelmed. ‘Video game designing is problem solving on steroids, but the sheer quantity of choices I had to make on site every day was horrendous,’ says David.

‘The big things were easy – but it was choosing the right glass, doors, finishes and all the endless small details, which I also wanted to be perfect, that gave me sleepless nights.’

When the build was finally complete in the summer of 2016, however, the pain had been worth it. ‘The outcome was just gob-smacking,’ he says. ‘Just being in the space was the payback, with stress giving way to an amazing sense of tranquillity. It’s a true retreat.’

It may be deep in Premier League footballers’ territory but this is no McMansion. Set in contemporary gardens, the largely two-storey curved modernist home is centred around a central, circular galleried entrance hall, lit by a glazed atrium, which connects to a study, cloakroom, media room, music room, and living spaces.

An open-plan kitchen/dining room has a huge central island and floor-to-ceiling windows allowing light to flood in.

Ultra slim, recessed glazing, with large sections by Sky-Frame, was used where possible, ensuring the least obstruction between home and rural views. ‘I wanted the overall effect to be less doors and windows, more picture frames to the green vistas outside,’ David says.

Upstairs, the atrium connects the property’s five large en-suite bedrooms, which all have dressing rooms (the main bedroom has two bathrooms and two dressing areas).

The ultimate relaxation space, however, is the bespoke leisure suite, featuring a sunken swimming pool, gym, steam and sauna rooms, hot tub and living area; beyond the landscaped gardens, an orchard, wildlife pond and parterre, plus stabling and paddock land, elevate the home to real country estate.

When asked about his favourite room, though, David picks the hallway. ‘I know it’s not usually top of the list, but I just love to linger here,’ he says. ‘The way the light spills down into it from the curved staircase just makes you smile.’ He has commissioned a series of abstract landscape paintings for the space by Cheshire-based painter and mixed media artist Mel Hood.

Having had several years to relish his creation, he now plans to move down to Christchurch, in Dorset, and has put the house on the market, for £6million. A bargain, he laughs, when you consider how much he spent building the home.

It was all worth it, though, he says. ‘What I wanted most from the house was to be able to decompress from the stresses of everyday life – and that’s exactly what’s happened.’

On sale for £6million with Jackson Stops.