For ages, humankind has looked to space as the final frontier, and the film industry is no exception. Last year, it was reported that Tom Cruise and director Doug Liman were coordinating with NASA and SpaceX on a $200-million action-adventure shot aboard the International Space Station, while Russia’s Channel One TV is rushing to get its own cast and crew up there first for the October shoot of a secretive project called “Challenge.”

But a pair of Canadian filmmakers beat both of them to the punch. Since January 2019, Felix & Paul, the VR studio launched by Montreal-based virtual reality directors Félix Lajeunesse and Paul Raphael in 2013, have been assembling 360-degree footage shot on handmade cameras by 10 astronauts from a revolving crew.

With more than 200 hours of footage to date, the material has so far fueled the first two episodes of the four-part VR series “Space Explorers: The ISS Experience.” The result, co-produced by Time Studios, provides the most advanced way to date for audiences — at least, those in possession of VR headsets — to experience what it’s like to live in zero-gravity in the 21-year-old space station, which orbits 250 miles above the surface of the Earth.

“Audiences no longer only have to watch stories about human spaceflight,” Lajeunesse said in an interview over Zoom. “We can really make them feel like participants and experience an astronaut’s journey from within.”

The first installment, which documented astronauts training for their upcoming mission, premiered at Sundance in 2018. With “Advance,” unveiled at SXSW last month, Felix & Paul reveal a staggering up-close look at the daily routines of astronauts as they reflect on their experiences, from laboratory experiments to mealtimes in close quarters. It also puts renewed focus on the history of women in space.

This summer, they expect to go one step further, by collaborating with astronauts on a spacewalk for five days of filming in the dark, perilous vacuum outside the station. The Felix & Paul team have developed a complex process of developing equipment for the shoot and coordinating with the astronauts from the ground. “When you work in an environment like this, you really cannot improvise,” Lajeunesse said. “At the end of the day, you have just a few human beings in space, and they are in a dangerous environment — the most hostile environment known to man.”

A few projects have been shot at the ISS over the years, with IMAX cameras used for 2002’s “Space Station 3D” during the ISS’s early days, while space tourist Richard Garriott directed an amateur short film in 2012. However, the VR cameras currently in use for “Space Explorers” represent a huge step forward for immersive media, just in time for the privatization of space to stimulate renewed interest in a rising low Earth orbit economy. “The culture of what happens in space is going evolve and transform,” Lajeunesse said. “It’s a very natural evolution of that idea to have Hollywood studios want to go and create a project up there.”

NASA has utilized emerging VR technology for astronaut training since the ‘90s, but when representatives from the agency first met with Lajeunesse and Raphael in 2016, they had a very different proposal. “I don’t think they’d ever envisioned virtual reality as a storytelling medium, as a way to actually tell the story of human spaceflight and make audiences feel a part of the actual journey from a narrative and outreach standpoint,” Lajeunesse said. “It was more like a utility thing.”

By that point, Felix & Paul Studios had built a track record as one of the more prominent entities in the young field of immersive media. The team had developed VR projects for studios, like 2015’s “Jurassic World: Apatosaurus,” but it was the inside look at the Oval Office of 2016’s Emmy-winning “The People’s House” that helped seal the deal. “That gave NASA confidence in our ability to work with highly controlled protocols,” Raphael said. “Just by seeing content that had nothing to do with space, they could get a sense of the power and potential of putting cameras up on the ISS.” 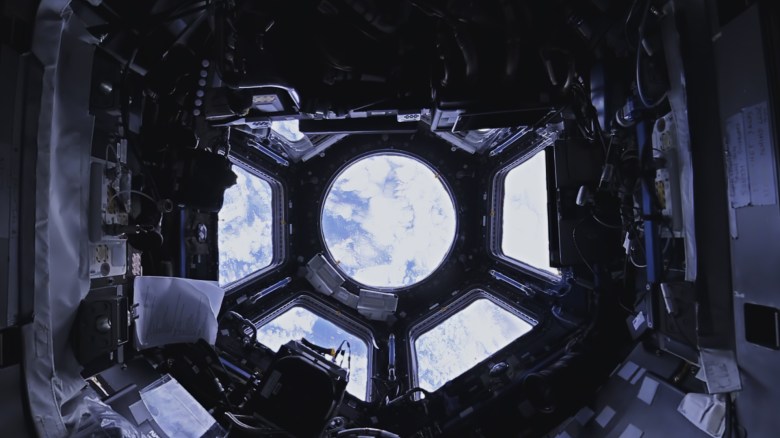 Though NASA retained control over the operation, it did not invest financially in its production. Lajeunesse and Raphael declined to specify the exact budget for all four episodes of “Space Explorers” except to say that it cost several million dollars, the bulk of which came from licensing deals with a consortium of 5G telecommunications companies that form the Global XR Content Telco Alliance. The footage has also been licensed to domes and planetariums, including the Space Center Houston. “We approached it very early on understanding that this would be an expensive production,” Lajeunesse said. “Coming from an immersive storytelling background, we knew we’d create the master of the story inside VR but then create additional products for other platforms.”

Much of the budget was allocated to camera design. “Our cameras are in-house tools that are not really products, so that on its own adding months of conversations with NASA,” Raphael said. “We wanted something that was very easy to use for the astronauts, very compact, small, lightweight.”

Since everything sent to space had to be certified for safety — and recording equipment had to pass FCC certification as well — additional tweaks were needed. They settled on an adjusted version of the stereoscopic Z CAM V1 Pro and Sony IVa camera. Adhesives barred from space had to be removed from the gear, as well as other technical specs that impacted temperature fluctuations, since heat dissipates differently in space. A few months ago, the team sent up a heavily modified version of the EV-8 camera that will be used for the spacewalks. Meanwhile, they also had to create software that allowed the 4K video to make its way back to Earth for remote viewing. 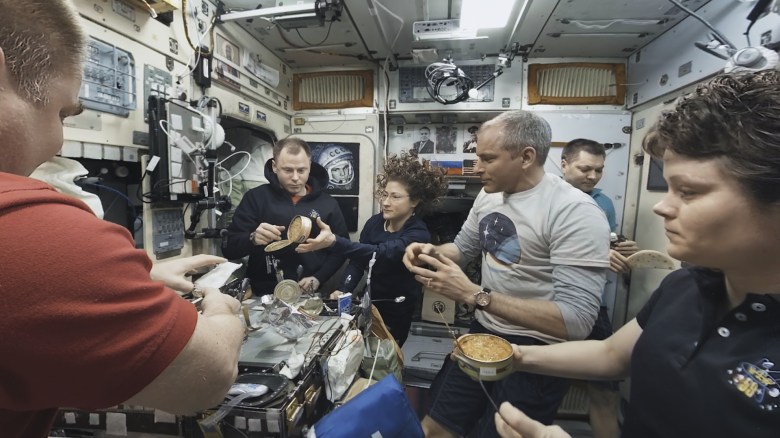 Since NASA insisted on approving all footage before it was released to the filmmakers, they were keen on developing a relationship with the first crew to work with the cameras so that they could train their replacements to capture compelling moments. “We needed astronaut crew time for them to become the protagonists of the story — and to become our in-flight production crew,” Lajeunesse said. “We had to create a production process that allowed us to operate from the ground remotely and answer their questions in real time.”

During that period, they coached the crew on keeping the cameras near to the action. “We wanted to position the camera as if it were a crew member, not disembodied or observing them from a distance,” Lajeunesse said. That helped encourage the astronauts to let the cameras run during some of the humanizing moments.

After ISS engineer Christina Koch participated in an hourlong interview, she continued to record as she opened up a package of fresh apples, then floated slices of it over to a colleague, who attempted to catch them in his mouth. The result is one of the more charming scenes of the second episode. In another beguiling sequence, a group of astronauts heading back to Earth embrace their colleagues, as their bodies gradually circle through the tight quarters. “We tried to focus on the kind of content that made the audience feel like they were just caught in the moment,” Raphael said.

The project overlaps with an auspicious time for the emerging space industry. With the recent attention to NASA’s Perseverance lander arriving at Mars — including a landing video that went viral — the potential of VR cameras in space is just getting started. Lajeunesse said the studio was in early talks with NASA about getting involved with the upcoming ARTEMIS missions, which are designed to bring astronauts back to the lunar surface for the first time in over 40 years. 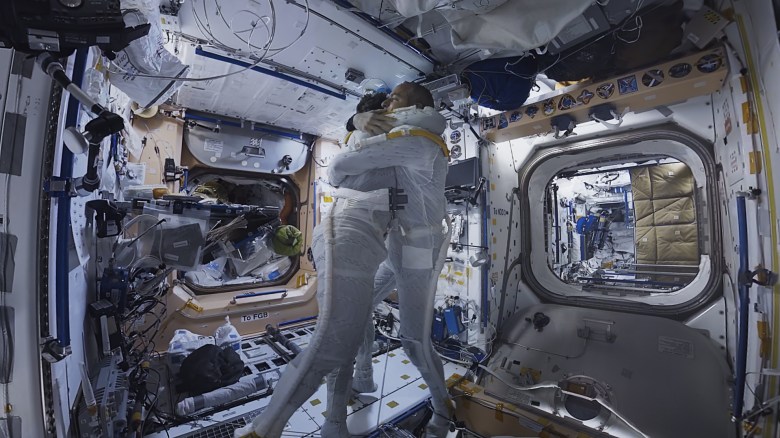 “It’s essential to document the next big milestones in space exploration through immersive media,” he said. “These projects are really about humanity. They’re not about specific countries or people. They’re about understanding our place in the universe within the infinite cosmos. This journey is meant to be shared with everybody on Earth.”

He added that the Tom Cruise and Russia projects should come as no surprise to anyone tracking the rush to commercialize space access. With SpaceX continuing to advance its ambitions and companies like Axiom aiming to build a private commercial module to the ISS, the next decade may host a lot of technological and creative ambitions in zero-G.

“It feels very organic to me, this transition from space exploration being completely owned by national space agencies to opening the door to the private sector,” Lajeunesse said. “We’re seeing the results of that now.”

The first two episodes of “Space Explorers: The ISS Experience” are now available in the Oculus store and viewable on the Quest, Quest 2, and Rift.